Regular readers of this blog will know that I don't often head over Norfolk way. This is largely because the distance is more than my self-imposed two hour travel limit - in fact I've only been birding there twice before. However, after a busy work period and with the prospect of a busy Christmas visiting family followed by a final trip down to Cornwall for the New Year I felt that I needed a break in the form of a bit of a birding sortie. With my rules for twitching firmly in mind the western sandpiper at Cley seemed to be well established and easy to see with only the long travel time preventing it from ticking all the twitching boxes. To get around this sticking point I decided to resort to my long distance tactic of heading up one evening, staying at a B&B and then enjoying a full days birding the next day before heading back home. This of course means that I don't have so much driving to do all in one day. I know that hardcore twitchers will think nothing of getting up in the middle of the night in order to do a long round trip in one day but, whimp that I am, it makes it a bit too much of an endurance test and consequently just not that enjoyable which after all is what it's all about.
I set off just before 6:30 pm and arrived at Cley at a small B&B (Cooke's of Cley) just before 10 pm - it's always nice travelling at this time as there is little traffic. At this point I must just mention this great new iPhone app that I've discovered called NavFree which (as it's name suggests) is a free sat nav app. I'd heard in the past that the iPhone wasn't responsive enough to be a proper sat nav so hadn't bothered to try it but a while ago I thought that I would give one a go - after all it was free. To my amazement I've found that it works really well: the only thing that you have to be careful of is at roundabouts when it says take the 2nd exit, it might count exits differently from you so you need to make a note of the road number it wants you to take and take a look at the on-screen map to check what it means. I know all this is probably very old hat to people with proper sat navs but to me it's been a real revelation and navigated me faultlessly to Cley in the dark. The only point of note en route was a glimpse of a barn owl in the headlights somewhere on the road between Fakenham and Cley. Amazingly this was actually a very late year tick for me (not that I actively year list though I do keep a note for the record). The B&B itself was fine though the room was rather cold. Once there I planned my itinerary for the next day: first stop would be the western sand at Cley follow by a brief look for the Ross's goose which was roaming around with the other geese in the neighbourhood. Next down to Cley beach for some sea watching to see if I could pick up any little auks. After that it would be Titchwell at around midday when the Coue's arctic redpoll often seemed to be reported followed by a period of no doubt fruitless waiting at Wolferton for a mythical golden pheasant and then heading back home. 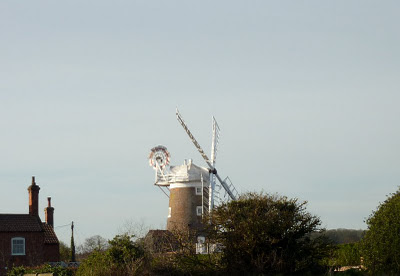 The famous Cley windmill
The next day dawned sunny but with a bit of a stiff south-westerly breeze. After a full English cooked breakfast I was at Cley RSPB at about 8:20 just in time to get the RBA message that the western sandpiper was on show at Simmond's Scrape. Wasting no time I hurried over there where sure enough it was in amongst the dunlin flock working its way around the various small islands on the scape. It was pretty easy to pick out being of stint size and it's white supercilium was clearly visible. I won't bother going into the finer ID discussion of this bird as it's been done to death elsewhere (see e.g. the bird forum thread) but it was a lovely bird to see and there were only half a dozen birders in the hide at most so there was no jostling or unpleasantness. I spent some time video and photographing it on Simmond's Scrape from Dauke's hide and Whitwell Scrape (Avocet hide) before deciding to move on just before 10 am. 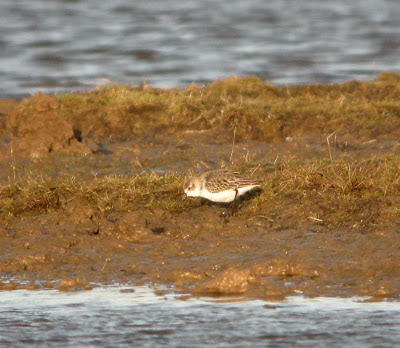 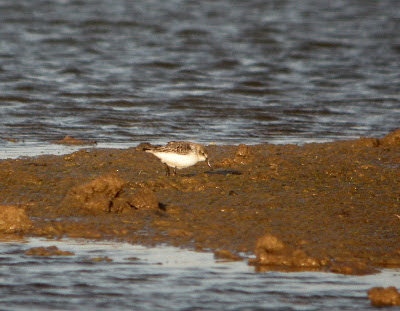 ...and here's some digiscoped video footage of the bird 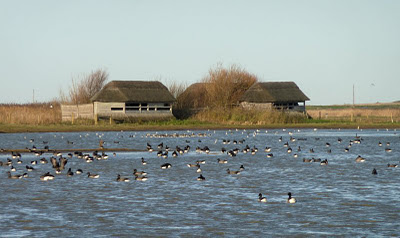 Cley was a most impressive piece of habitat which
was packed full of birds and I'd not even seen half of it -
this is Pat's Pool from Bishop's hide looking across to Avocet, Dauke's and Teal hides
Next a bit of wild goose chasing: the Ross's had apparently been on the pools with the vast dark-bellied brent flock at first light but flew inland with some of them. I drove up Old Woman's Lane a bit where I soon found a large brent flock. I got a bit excited when I found a pale goose in amongst them but it turned out to be a leucistic brent. Without any extra inside knowledge I gave up on this and headed to Cley beach for a spot of Norfolk sea watching. Here one was at the mercy of the full force of the wind but fortunately there was a lookout shelter though the shingle bank was piled up rather high in front of it so that one had to stand in order to view over the top at the sea. Having been used to sea watching at Cornwall where one is inevitably rather high up it was rather weird to be so low down with such a narrow "viewing window" on the sea. A few other people turned up and joined me but it was very quiet: there was a steady stream of divers going both ways, one common scoter and a few auks but nothing of note. 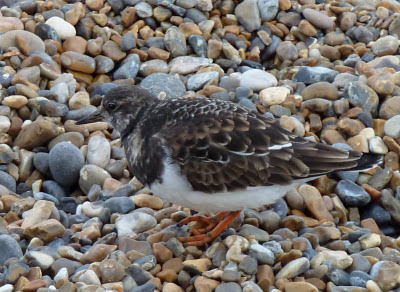 There's the usual problem of photographs for a sea watching sesion.
Here's a shot of a very friendly turnstone that was wandering about right by my feet.
At 11:30 I decided to head off towards Titchwell for the redpoll. On the way at one stage I had to pull over in amazement as thousands of pink-footed geese flew over, skein after skein stretching as far as the eye could see with more coming over constantly. Forgive me for going all "Autumn Watch" on you as I know that this is nothing unusual for Norfolk regulars but it was nonetheless a most impressive sight. There was another flock of geese in a field en route which someone was watching and so I pulled over to take a look at them. They looked rather like bean geese but unfortunately they took off before I could get a decent look. 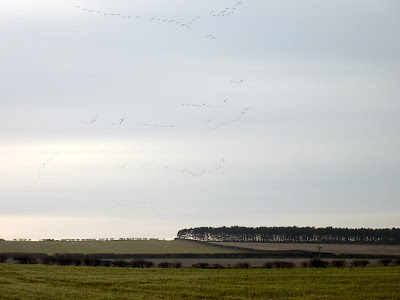 pink-foot skeins (click to enlarge) -the photo
doesn't really do the vast numbers any kind of justice
I arrived at Titchwell some time after 1 pm where I soon found the requisite gaggle of birders right next to the Visitor Centre all staring intently at one tree. This is generally a good sign when you turn up for a twitch and it turned out to be so in this case. The redpoll flock were concentrating on a couple of alder trees so it was just a matter of working through them whilst they were coming and going. There were a couple of pale mealies in amongst the lessers and a couple of birders soon picked out what they claimed was the arctic though I couldn't get on it. A short while later it showed really well in one of the trees where it was easy to pick out from its very frosty look and small bill. Again the ID has been discussed fully elsewhere so I won't go into all the details. 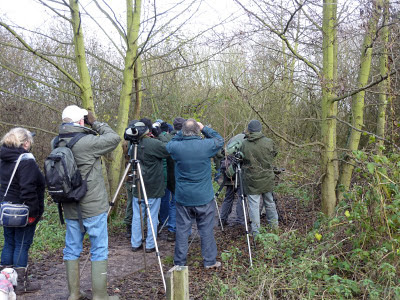 I didn't even attempt to photograph it -
here are the people watching the bird... 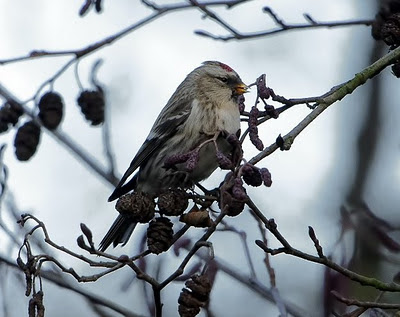 ...and here's a photo taken by someone with more skill and a bigger lens than I have. This is the best photo that I could find of the bird on the web taken by (c) Andy Thompson
(see his fabulous Wild about Wildlife website).
Finally on towards the Wolferton triangle, well known for its golden pheasant population though they are very hard to see. Several people on Bird Forum report visiting 20 times or more without success and I'd put in a couple of fruitless hours on one of my previous Norfolk visits so I wasn't holding out a great deal of hope. I had been told about Sculthorpe where there were some goldies which were much easier to see but apparently these ones are released captive birds rather than self-sustaining "wild" ones. It's all a bit random with some people e.g. LGRE questioning the purity of the Wolverton birds but in general opinion seems to be Wolferton tickable, Sculthorpe not. I opted for the "park up and wait" tactics rather than curb crawling and positioned myself part way along the southern section with a good view in front and behind in the rear view mirror. This way I could eat my packed lunch at my leisure, sip my tea from my flask and listen to the radio quietly whilst waiting. All in all I put in about an hour and a half where the best I managed to see was a couple of small deer and a few squirrels but I wasn't really surprised at my lack of success. 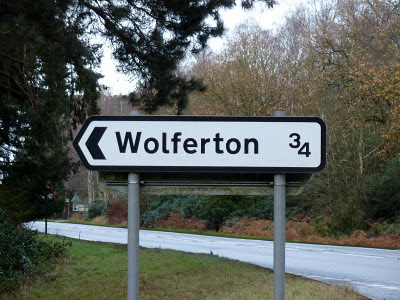 This way to fruitless waiting 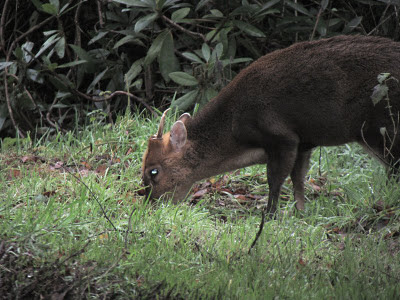 not a pheasant!
At a little after 3pm I "fired up the Quattro" (volvo actually), booted up the sat nav, set the coordinates for home and headed off into the rush hour traffic that was building up en route, arriving home just after 6pm tired but pleased with my December sortie to Norfolk.
Posted by Adam Hartley (Gnome) at 13:09 No comments: