After a lunch at Browns restaurant with my VLW and an old Uni friend, I was winding down for the weekend on a Friday afternoon when at around 3 pm I got a Badger text "Richard's Pipit, Downs, Woodway, found by RW". "Bugger!" I thought. Richard's Pipit was so rare in the county that basically you had to go for it but it was also one of those species that could be really hard to twitch. Pipits can of course be rather mobile things and the Downs is such a vast area that it could be almost impossible to see. Still, as I said, basically you had to go for it so I got my gear together, told my VLW I was off on another county wild goose chase and set off. Of course Friday afternoon is absolutely the worst time to try and get out of Oxford. I normally budget on 10 minute from my house to the ring road but today it was chocker everywhere and it was a good 30 minutes today. Whilst in a jam on the Abingdon Road I called up RW to get the latest news. I was fully expecting to hear a "currently being looked for" reply but instead to my amazement he told me that he was still watching it in a field and that other county birders were now starting to arrive. In addition he helpfully told me exactly where to turn off the main road in Blewbury (opposite the garage) and where to park. Armed with the fact that the bird was still there I allowed myself a small glimmer of hope as I finally got to the ring road and fought my way onto the maelstrom that was the A34 on a Friday afternoon. To add an extra frisson to proceedings, my petrol warning light had just come on. However, I wasn't going to waste time filling up now and decided to chance it until the return journey. Finally I was at the Didcot turn-off and eventually, still in heavy traffic, heading east through the various downland villages of West Hagbourne, Upton and eventually Blewbury. There was the garage and I turned off and sped up Wooodway Road. Half way up I caught up with a guy on a moped with an L plate, cruising along at a steady 10 miles an hour in the middle of the road. Now had it been me, I'd have moved to one side to let me pass, but no he chugged along all the way until finally he turned off. Beyond the last house I saw the familiar face of PL walking up the track so I offered him a lift and we negotiated the last few hundred bumpy yards before dumping the car with several others and got our gear out. I was all ready to hurry on up the track when PL looked behind us and said "there they are". Thank goodness I'd not gone tearing off in the wrong direction! Whilst PL coolly sauntered over towards the rest of the group I broke into a trot, arriving breathless to plead "tell me it's still there!" and fortunately, it was. Someone kindly gave me a view through their scope and after an agonising 30 seconds up popped the distinctive head of a Richard's Pipit from the long grass and I could finally relax.

After that I could recover my composure, set up my scope and get directions for the bird for myself. It was looking very calm and settled, working its way through some long grass in a large field just after the last house on the road before the landscape changed into the wide gallops of the proper downs itself. Fortunately the field was fairly uniform and there weren't any hidden dips into which the bird cold disappear. However, It was often hidden from view by the tall grass and was moving constantly so it was easy enough to lose track of. Of course I tried digiscoping it but my battery died before I could take a shot. So instead I had to resort to using my macro moth camera held up to the lens to try and take some photos. Given the constant movement of the bird it was very hard to get a successful shot off but eventually I managed a couple of record shots. RW showed me a couple of absolutely stunning back of the camera photos of the bird that left me drooling. 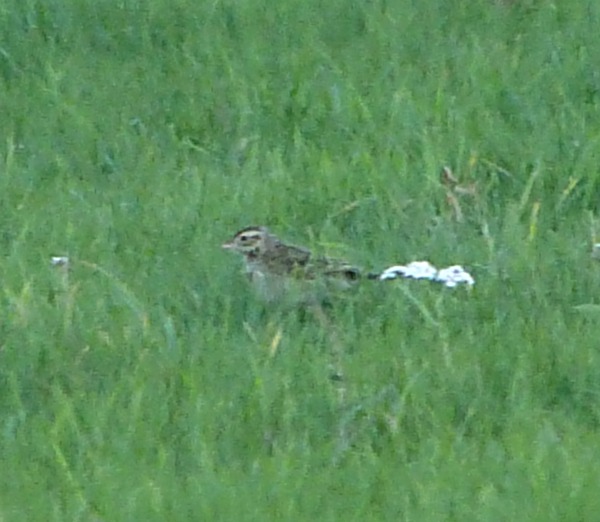 Whilst watching the bird I chatted away with the dozen or so other county birders there. RW was joking that this wasn't even a self-found county tick as he'd found the first one back in the autumn of 2002 - one of the perks of having the Downs as a patch I guess! Apart from that one (which stayed about a week), there has been a single-observer record at Otmoor (by PB) in September 2008 on the Pill Ground at Otmoor which I remember looking for the next day, dragging my then two year old son in his pushchair through the mist and bog in a vain search for it. There was also a single observer record from PC in April 2017 at Lollingdon Hill which stayed all of 15 minutes. So this bird was only the fourth county record and only the second twitchable one, with the last being 16 years ago. That's how rare this bird was in an Oxon context. Chatting with the others, it was a county tick for a most of them, some of them even county elders in the upper echelons of county listing.


The sun had already set from where we were all standing by the time I'd arrived at around 4pm and after a while I started to get cold. With a bit of work to finish off that I'd dropped in pursuit of this bird I decided to head back and offered PL, who was also leaving, a lift back to his car. We returned to the Gnome Mobile discover that he'd left the passenger side door open in his haste to go and see the bird! Proper hard core twitchers us! I dropped him off and headed at a much more leisurely pace back towards Oxford, first of course stopping off to get some fuel for the car. There was the inevitable fight with the traffic to get back into Oxford but I didn't mind. I'd manage to see a county Mega and all was well with the world.