I've not been on any major birding trips recently but just over a week ago it was a lovely sunny but frosty day and I fancied a birding trip out. There'd been a long-tailed duck on a pit in Dorchester for a few days and as I had missed the one at Appleford GP's earlier I decided that it would be nice to go and have a look. I was able to negotiate with my VLW (very lovely wife) that I could go without L our two year old son so I set off and was soon at the appropriate pit which was located down Drayton Lane.

As I arrived I met a fellow birder just getting out of his car who was also looking for the same bird. He thought that it might be on the pit next door but I was pretty sure I had the right pit and so we started looking together for it. There were plenty of diving ducks about: pochards, tufted duck, some goldeneye as well as a few dabblers around the fringes: mostly shoveler and a few wigeon. There were also quite a few canada geese and plenty of the ubiquitous coot about. A flock of 8 or so siskins flew over calling noisly, which was nice to see. We worked our way along the pit until about half way down when my companion, who still thought it was the other pit, decided that he would go and try over there. I went on further on my own and towards the end I encountered a couple coming back the other way, who told me that the long-tailed duck was right down at the end of the pit. Encouraged by this I continued on to the end where I found a clearing where I could see out clearly. After several minutes of fruitless scanning I finally found the bird. It was diving frequently and it was hard work to get any decent digiscoping shots, especially as it was largely in a shaded area with lots of reflections on the water but I did manage a couple of ok shots. The other birder returned from the neighbouring pit, I showed him where the bird was and he and I watched it together for a while. 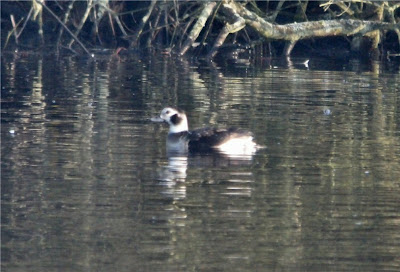 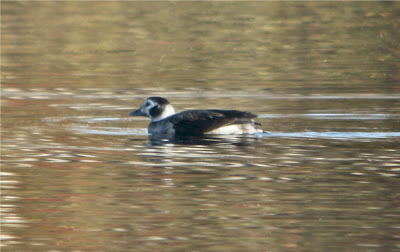 The Dorchester long-tailed duck.
This bird didn't represent a new year tick for me as I'd already seen quite a few on the sea at Easter up in Fife, but it was nice to get out on a crisp winter's morning and to see such an uncommon bird for Oxfordshire.

A few day's later I went down to Farmoor, once more to try to find a redpoll that so far has been eluding me. I was only intending to be out for a couple of hours but in the end I was out all morning. Still it's always nice to visit Farmoor, especially when there are some good birds there at the moment such as the two first winter scaup and the two great northern divers. I parked in my usual spot in Lower Whitely wood and walked along the road towards the farm, keeping an eye and ear out for anything interesting. Just through the gate there were a number of finches but mostly green with some gold as well. There were far fewer redwings and fieldfares around than usual as I made my way along the path towards the pump station and Pinkhill which was supposed to be the hot spot for redpolls. When I got there I scanned carefully but all I found was a nice pair of siskins feeding in an alder tree.

I next made my way up the bank of Farmoor 1 to the tufted duck flock to have a look for the scaup. I soon managed to find them and had a go at digiscoping though the light was not very good. Below is a passable shot of the male. 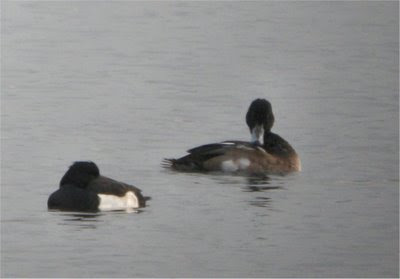 The first winter drake scaup with a drake tufted duck

Along the shore of F1 were also 7 dunlin and a couple of redshank. I next decided to walk over to the sludge pits on the north side of F1 as some redpolls had been seen there recently. It was a bit of a trek and it reaped no reward. Retracing my steps I was back at Pinkhill when I met a fellow birder who was carrying an SLR with a good sized lens. He'd just been trying to photo a tree creeper that flew my way before he could get it. We also saw a nice male bullfinch but once again he couldn't get a proper shot. I asked but he'd not seen any redpolls about. We parted company and I headed on towards F2 in the direction of the car.
On F2 I looked out for the great northern divers and soon managed to spot one of them diving in the middle of the water. I did have an half-hearted attempt to photograph it but the waiting time whilst it was underwater was rather long and it was getting late so I gave up. Back down in the south-west corner I saw a common sandpiper, a redshank and a few of the dunlin but they flew off before I could photograph any of them.

Disappointed at not having seen any redpolls I made my way back along the road towards the wood. Where the road bends to the left towards the wood there was a nice flock of goldfinches and as I walked I idly watched them until I noticed a couple of brown birds with slight white wing bars in amongst them. At that point I was on full alert and scanned carefully in order to confirm my suspicions that they were indeed the redpolls that I'd been looking for. They were feeding actively right by the road side so I positioned myself up on the opposite side of the road and crouching down I continued to watch them. They didn't seem too flighty so I set up my scope and rather than getting my digiscoping attachment out, just held up the camera to the eye piece. The result came out surprisingly well. 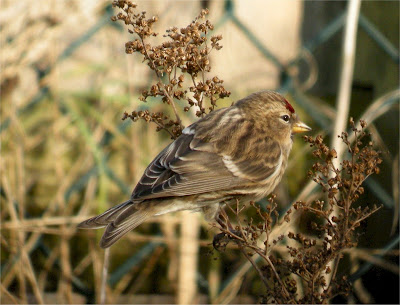 At last my lesser redpoll for the year!

So another year tick from my lesser redpoll which brings up 220. It's looking increasingly unlikely that I am going to make 225 but I am more than pleased with my efforts which have far exceeded my expectations for my first year list.
2008 Year List
220: lesser redpoll
Posted by Adam Hartley (Gnome) at 11:11