We've had house guests staying with us all week: old college friends who now live in Hong Kong so we don't get to see them very often. Whilst it's been great to catch up with them it did make it rather difficult for me to get out birding whilst they were here. I've had to watch birds like the Franklin's gull at Chasewater come and go and I've managed not to see the white-tailed plover at all which is quite a feat given how it's done a tour of the country. I've even not gone to see the little bitterns in Somerset. All in all my reputation which I've recently been acquiring as as a bit of a twitcher has rather gone to pot.

Anyway, the guests finally left on Saturday morning so I arranged to go out to Farmoor on Saturday evening to get a bit of gulling in. I wasn't expecting much but just wanted to be able to rummage through some gulls to see what was about. I was saying in my last blog entry how much I like waders, well I also like gulls but for different reasons: they're rather difficult! I enjoy the ID challenge of them: the fact that there's so much variation and some of the pointers can be so subtle. They're not beautiful in the way that waders are but they are very interesting.

Whilst wandering down the causeway I heard the familiar piping call of a common sandpiper and looked back to see a pair on the shore not too far away accompanied by a single turnstone. Unfortunately a walker heading in that direction managed to flush them off to the far side of the reservoir before I could have a go at digiscoping them. In amongst the gulls I soon found the partially albino black-headed gull that had been frequenting the roost. There were also quite a few yellow-legged gulls around and some of these birds seemed to have a fondness for standing on the buoys so I was able to digiscope one of them reasonably satisfactorily. 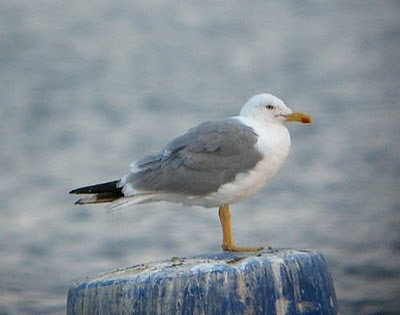 A splendid yellow-legged gull standing on a buoy 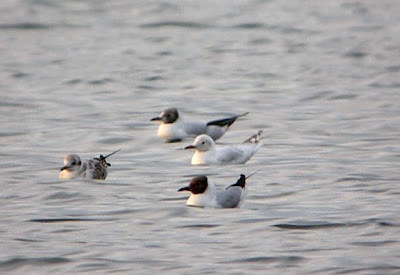 the rather strange looking partially albino black-headed gull
Apart from that I spent my time sifting through the evening roost looking for juvenile Med. gulls. Unfortunately I wasn't able to pick any out though given their relatively subtle appearance I could well have missed some. I did manage at least 20 yellow-legged gulls in total and it was nice to get in amongst the gulls again. I shall look forward to further gull sessions in the coming months.
Posted by Adam Hartley (Gnome) at 15:10