A Visit to Farmoor

I was just staring blankly at my computer screen feeling rather less than inspired when I got a text through on the Oxon birding grapevine saying that there was a black-necked grebe at Farmoor, found as ever by Dai John on his morning rounds. The perfect antidote to my boredom I decided and got my gear together and headed out the door. A quick call to Dai ascertained that the grebe was on the west side of Farmoor I so I parked at Lower Whiteley farm and made my way up to the reservoir side where I met up with Jason "Badger" Coppock who was looking at the goldeneye ducks. The weather was absolutely gorgeous with bright sunshine and not a breath of wind and I soon started to feel rather warm with all my layers on. We wandered over to Farmoor I and scanned the reservoir from the end of the causeway where Jason soon picked out the grebe on the far side and swimming quite vigourously east. We made our way over to the other side but the grebe was intent on leading us a merry dance and was by now half way down the bank of the reservoir. We eventually caught up with it though we were now facing right into the sun so viewing and photos were difficult to say the least. The bird was still swimming away and we followed it round until we were at the east end of the reservoir where it seemed to slow down and we managed to take some record shots. 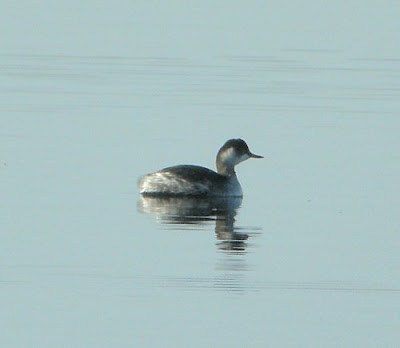 The black-necked grebe, still largely into the sun and by this time rather distant
Given how far we'd come we thought that we might as well walk back along the causeway and this would give us a chance to look for the sanderling the Dai has also seen that morning. This was another "red" bird in my list in that it was a county year tick for the list that I'm not doing. In fact the black-necked grebe had also been a "red" bird as I'd missed one earlier in the year. About three quarters of the way along the causeway we found the sanderling as it flew past and behind us though it soon came back again and sped off to the far shore of the reservoir. Having already been led a merry dance by one bird we weren't going to walk around the reservoir again and so we left that bird unphotographed.

We decided to walk back along the track from Pinkhill towards Lower Whiteley via the Pinkhill hide. As usual there was nothing on the scrape there but a nice barn owl was hunting in the long grass behind it and it even posed in a tree long enough for some digiscoping to take place though unfortunately it was in deep shade so it was poorly lit. 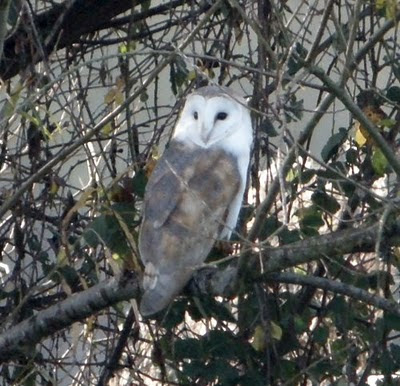 Barn owl, always a nice bird to see
As we left the hide Jason got a call from Dai asking if we'd managed to see the "birds". As we'd only known about the grebe he queried Dai's use of the plural only to be told that there'd also been a great northern diver on the reservoir at well. Somehow this second bird had got lost in the chinese whispers of text messages between Dai and Jason and myself. Jason made a crack about how we were the birding ninja's of the county, being so sharp as to walk right past a great northern diver without spotting it and we made our way back to the reservoir where we soon picked it out really close in to the shore though it moved out more as we came closer. This time the light was perfect being right behind us and we were able to take some reasonable shots. 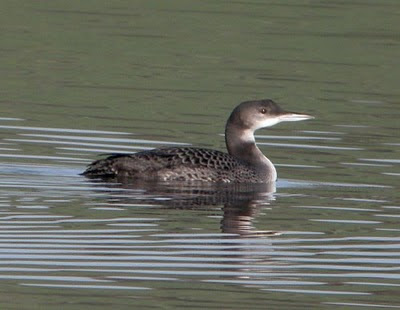 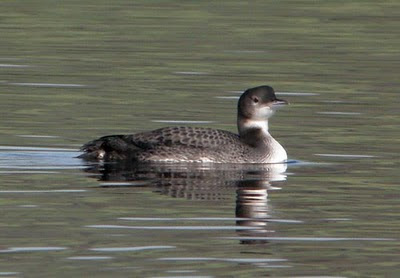 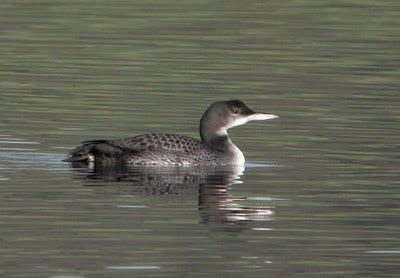 The great northern diver. The "scalloping" on its back indicates that it's a juvenile
After drinking our fill of this great bird we headed back to the track to the farm, looking out for the brambling that was supposed to be around but the best we came up with was a goldcrest in the hedge. All in all a nice visit to the reservoir which has had a rather poor year for good birds so far and with the diver I'd managed three ticks for the county year list that I'm not doing.
Posted by Adam Hartley (Gnome) at 15:51