Usually my birding on the Meadow is a fairly sedate affair: I cycle down, have a scan and a bit of a wander and with any luck I might turn up something good. Yesterday, however, it was anything but sedate and only a mad scramble got me down there in time to catch up with a passing patch mega.
In May, provided there are some decent flood waters still remaining, I switch to checking the patch twice a day as stuff tends to drop in and move on pretty quickly. The birds that had been turning up on the Meadow recently certainly justified the extra attention and in fact the last few days the Meadow has had a real purple patch with channel wagtail, blue-headed wagtail, whimbrel, about 200 bar-tailed godwits so far and 2 wood sandpipers in amongst the usual waders that one might expect at this time of year. Fortunately there are several people visiting the Meadow regularly including Richard Foster, who also lives extremely close and who is becoming as obsessive about checking out the patch as I am. In fact he's been going twice a day for some time already now. Having said that, on bank-holiday Monday I'd not visited the patch by late morning but this was mainly due to the fact that someone else had been there at first light already to see the wood sandpiper from the previous evening so I already knew what was about. I was just on the phone to someone when my mobile went off so I apologised to the person to whom I was speaking and took the call. It turned out to be from Richard saying that a white stork had just dropped in at the southern end of the floods. Given the large number of people enjoying the Meadow in the bank-holiday sunshine he reckoned that it was only a matter of a short time before it would flush. I shoved some shoes on, grabbed my bins and point and shoot camera (no time to wrestle with my scope and tripod), ran for my bike and ignoring my VLW's protests that we needed to discuss something, sped off towards the Meadow. I made it down literally in two minutes and as soon as I was in visual range of the Meadow kept my eyes on the sky in case it was in the air.
Just as I was approaching the southern end a walker ahead of me put up the bird which started flapping lazily and rather low northwards along the floods. It was quite amazing just how large these birds are, they really are huge. Fortunately it came down at the north end of the floods so I sped over towards Burgess Field gate where there were a few people gathered. Fortunately, Jeff Pursey who had a digital camcorder on a tripod was there and he took some footage which I've included below. I took a couple of point and shoot photos with my camera and then made the call to Ian Lewington (the Oxon county recorder) with the news before calling Bird Guides. The BG chap wanted to know if the bird was ringed and explained that the rings can be rather small so I had a good look but couldn't see anything on it's legs at all. 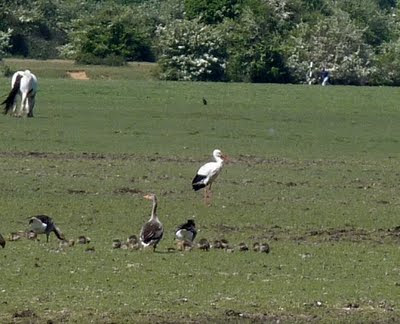 The stork on the ground just to the north of the floods near Burgess Field gate.

Unfortunately within a couple of minutes the bird was put up by some walkers nearby and it flapped off lazily and quite low in an easterly direction and I had to make a second call to Ian with the bad news. The next few minutes was taken up in fielding phone calls from local birders wanting to know what was happening so I had to break the bad news to each of them in turn. 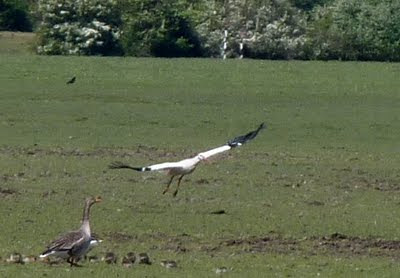 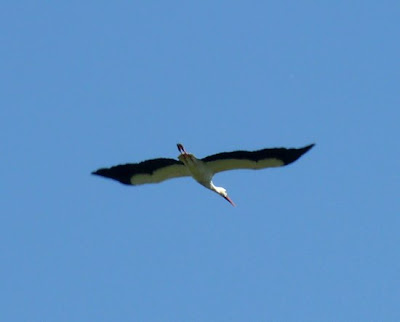 Unfortunately taking off again all too quickly

Video footage of the stork in flight (c) Jeff Pursey

Amazingly, the bird was subsequently seen on two occasions that day: flying over Otmoor reserve and then flying over Bicester so it had gone in a fairly straight line from where I'd seen it. On subsequent days it was seen over Bedfordshire and Cambridgeshire. Graham Cox took these stunning photos of the bird as it flew over Greenaways on Otmoor: 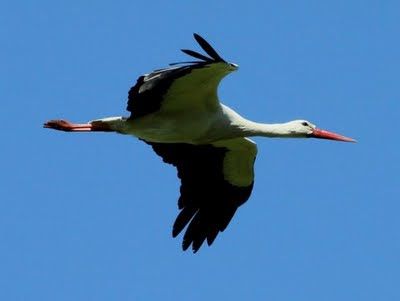 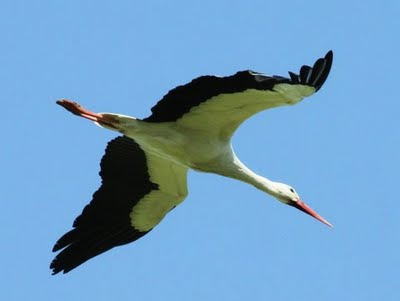 Clearly unringed (c) Graham Cox
In a bizarre twist, when I came home I told my eldest daughter K what I'd seen and she said that she'd seen a very large bird standing on a chimney pot more or less opposite our house the afternoon of the day before. When I showed her my photos she immediately identified it as the bird that she'd seen so it had been in the area for at least the previous night.
Richard later texted me about the recent white stork which had been seen down in Devon. Apparently that one had been ringed and had turned out to be an escapee so I had a look through the excellent Devon Bird News where I found some photos which I've pulled directly off the blog. 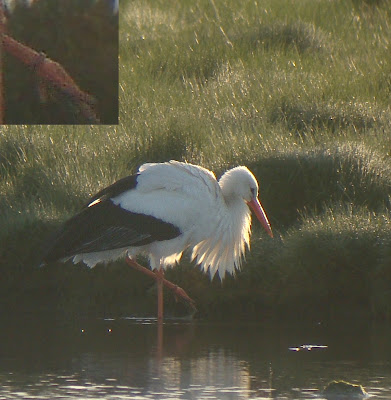 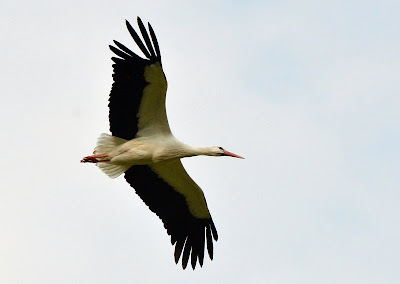 So, thanks to a timely call from Richard Foster (for which many thanks) I managed to jam in on a great patch and county tick though it was a real shame that it chose a bank holiday to turn up when there were so many people about on the Meadow to flush it so quickly. I shudder to think how I would have felt had I not managed to get down there quickly enough to see it before it flew off. Whilst of course I am delighted to have seen it, it would have been great if it had stuck around long enough for more local birders to connect with what had been a cracking bird. I suspect though, that it's only a matter of time before we get a more twitchable one in the county.
Posted by Adam Hartley (Gnome) at 22:00