I'm not much of a twitcher. I do go occasionally but I have family commitments and so generally my twitching is restricted to birds that have been around for a long time so that I can go and see them on a day that fits in with my family life and also so there's less of a chance for a dip. I also generally won't travel for more than two hours to see a bird though I will make an exception for something good that has been around for long enough (e.g. the Frampton oriental pratincole). Anyway, my usual twitching rules were rather bent today when Badger (Jason Coppock) sent me a text tempting me to go for the reported greater yellowlegs that had pitched up at Daventry Country Park, well within my two hour travel radius and whilst it was not strictly fulfilling my "settled and well established" criteria the fact that it was being reported regularly throughout the morning meant that it was highly likely it would stay for the rest of the day at least.

Jason was getting together a car-load from Oxon to take a look and I decided to tag along. There was a certain amount of complication involved in the rendez-vous with the others but eventually we were heading off towards Daventry with eagre anticipation. En route I learnt that there was some history with this species with several members of the team having dipped horribly on a couple of occasions in the past so this was very much a revenge twitch for them. For myself on the other hand, I'm such a low lister that it was just another of many birds that I needed and having had the privilege of finding the lesser 'legs on my home patch of Port Meadow last year it would be nice to see it's larger cousin.
We arrived in good time and soon found the gaggle of birders all peering in the distance towards the muddy shoreline where there were a couple of black-tailed godwits and another bird. Someone let me look through his scope and I actually said at the time "that looks like a greenshank" only to get the reply "No that's actually the yellowlegs". Fair enough I thought and set about scoping and then videoing it. It's legs appeared rather muddy but the tops did look yellow-ish though much darker than the lesser from last year. It's amazing how one can convince oneself of something when a crowd of people is telling you it's true and I fully admit to being quite happy watching it and thinking it was the genuine article. After a while it flew and I made sure to take a careful look at the white areas as it flew: white rump and a whacking great white wedge up its back. Now I knew that lesser had a squared off white rump with no wedge but couldn't recall what the situation was for a greater and assumed that this was what it should look like so I'm not claiming any great incite even at this stage. Shortly afterward, LGRE came up to me and asked if I had some video footage of it flying. I looked through my various shots but didn't have anything conclusive. However, I told him what I'd seen and he pointed out that a white wedge meant a greenshank and not a yellowlegs. Finally the veil started to be lifted and I realised that in all probability we were all happily ticking a greenshank, albeit one moulting out of summer plumage with rather bright legs. Lee started to ask the other birders there and word started to spread and then we all started to notice how when it was preening it was showing off a vast expanse of white on its back. Doh! Poor old Garry Bagnell (of Channel 4 documentary fame) turned up having driven all the way from Crawley in Sussex only to be told that it was actually a greenshank that he'd come for! At this point the Oxon bunch decided to leave with yet another dip in the name of this species and now I too had a tale to tell of a nasty dip and a bit of a grudge to carry around!

I know that it obviously looks like a greenshank when you watch the video
but it's not so easy when there's a crowd of people and a whole bunch of
pager messages all telling you it's a greater yellowlegs! 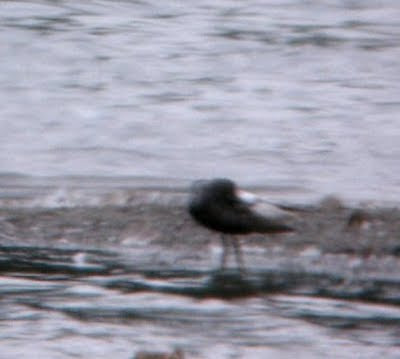 A crappy videograb but you can just make out
the white all the way up the back
In psychology there is a concept of crowd thinking which is a much more primitive basic form of thinking where people go along with the perceived wisdom (or often ignorance) of the crowd. This phenomenon occurs in many situations including lynch mobs and even the stock market so it's well documented. Still it was fascinating and also rather scary to see how easily one could be taken in by it. 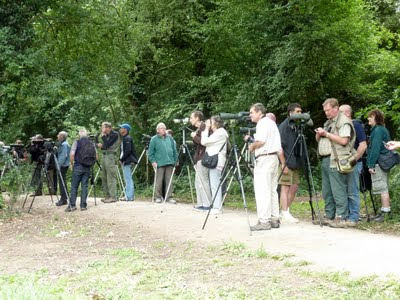 Some of the assembled throng
The moral of the story is of course always to check for yourself when you go to a twitch and not to be taken in by what the perceived wisdom is. Still it's an occupational hazard with twitching and this has happened many times in the past and will no doubt happen again many times in the future. At least I now have the knowledge of the rump pattern for great yellowlegs indelibly etched into my memory for the rest of my life!
Posted by Adam Hartley (Gnome) at 20:40