Astute readers of this blog may have noticed that in my last Cornwall entry I started referring to the RBA text service rather than the Bird Guides one which I have used up until now. I have indeed recently changed allegiance but having recently used both services this does mean that I am in a reasonable position to draw comparisons. Also, as I have my fingers in so many birding blog pies (Port Meadow Birding, Pendeen Birding, the Oxon Bird Log), it does mean that my blogging masterpieces are more thinly spread and I don't get to do so many entries for this blog. Lest readers think that I am some kind of blogging slacker I thought that I'd better write about something even if it's not directly related to what I've seen in the field.
It all started not on my most recent Cornwall visit but the one at the start of October. I was with Dave Parker in the Drift hide and he kept getting texts from RBA about various local birds which would inevitably arrive long before I got the corresponding Bird Guides text. Dave confessed that he'd switched from BG in the end because of this tardiness so this got me thinking that perhaps I too should at least investigate. Accordingly on my last trip down to Cornwall (the end of October one) I took up the RBA free (though you have to pay for the texts) seven day trial of their text service. On the way down to Cornwall I had both the BG and the RBA services running concurrantly so that I could compare. It immediately became apparent that the RBA texts were way ahead of the BG ones, the latter often arriving up to an hour after the RBA one hit my phone. Needless to say I switched off the BG ones that evening and signed up properly for RBA then and there.
The text service is very fast: the texts go out at the same time as the pager message so you can't really ask for more than that. What's more you can apply various filters to which text messages you receive including all the usual parameters such as Where, When and What. You can even enter a list of birds that you either want or have seen and it will use that as a filter for messages. In short it offers all the control that you might need. Why haven't I gone the whole hog and got myself a pager? Well, I carry my phone around everywhere with me, I don't want to have to lug a second gadget around as well. Also for much of the time I don't need instant messages: when I'm at home I'm not likely to twitch anything at short notice apart from local birds and fortunately I'm in the loop regarding county news. It's only really in Cornwall that I want the instant news so the text service is ideal for me. If you're happy to carry a pager around then the main consideration is cost. The pager service costs more than the text one but you then have to pay for the texts (10p + VAT per text) so if you're going to be interested in a lot of messages then the pager may be your best bet. There are also advantages with using texts in that if you are in a signal black spot your text will get through to you once you regain a signal whereas I understand that you just miss the pager message.
There is now an additional alternative which is the phone app. Both Bird Guides and RBA have now released iPhone apps and have or are about to release corresponding ones out for Android O/S phones. I've tried both the BG and the RBA ones and they basically do the same thing in allowing you access to the day's bird news as if you were on their web page but instead via your phone. In addition they give you links to site maps and will use the phones mapping services to plot a route for you if required. I find the RBA App faster in updating though this comparison might not be fair as I was using the old iPhone O/S for the BG one which did seem to cause a few other problems. The RBA one has a great search function which allows you to enter a list of species that you are interested in which you can then search against which is it's a great way of filtering the news for what I'm interested in though unfortunately it doesn't save this list when you switch off the phone. On both apps you can also browse the gallery of photos and get directions to the site etc. In short this is a great way to keep in touch with bird news which I'm sure is going to become more and more popular. RBA have gone even further in using Push technology to send out Alerts for bird news. For the less tech savvy this means that the news appears like an SMS message rather than you having to go and ask the app for news. This offers a real alternative to either a pager or the SMS service. I did a trial of it and there is a bit of a lag with the Alert messages which come between 5 and 10 minutes after the corresponding SMS message so in the end I decided to stick with the SMS but it's certainly worth considering and once you've paid the annual fee there are no per-message costs at all. 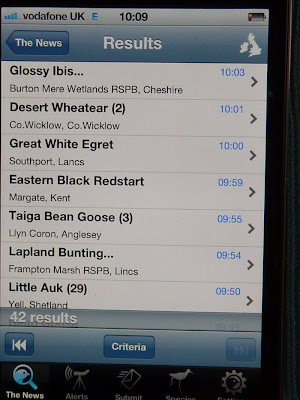 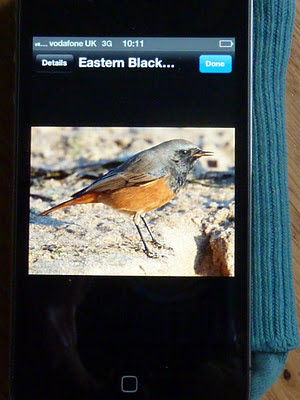 A couple of screen shots from my iPhone of the RBA app.
I've not yet mentioned the web-sites themselves. The daily news is laid out in pretty similar ways on either site but there are a few noticeable differences:
1. Bird Guides seems to be the service of choice for photographers with far more photos uploaded to their gallery than RBA which is surprisingly scarce on the photo front. They also have the Photo of the Week competition which attracts some absolutely stunning entries each week.
2. Bird Guides seems to have more weekly articles.
3. When you click on a species link in Bird Guides it gives you a little write-up of the salient identification issues as well as photos. RBA more or less assumes that you know what you're doing on the ID front and just gives the photos.
4. If I could make one change to the RBA web service, it is that it would allow one to filter news against a saveable list - you can do this for their SMS text service so it can be done. As mentioned above, you can do it for the RBA app but annoyingly it doesn't save the list and I don't want to have to type it out fresh each day so saveable lists would be much appreciated.
In conclusion if speed of news is paramount there you have to go with RBA really and with the SMS and App options in addition to the pager you're bound to find a service that suits. For photography and more general web-browsing I think I prefer the Bird Guides site on balance though not so much that I'm going to fork out for access to it in addition to the RBA fees and some of it can be accessed by non-subscribers anyway.
Posted by Adam Hartley (Gnome) at 14:25