I've been eyeing the reports of the common yellowthroat at Rhiwderin, near Newport with some interest for a while. The reason is that it looked a likely candidate for a Gnome twitch: it was within my self-imposed two hour travel cut-off, it had been around for a while and was being seen each day and the crowds would have died down a fair bit by now. However, as I'd been away in Cornwall a couple of weeks ago I felt that I needed to put in a solid week's work last week before taking a day off so soon after my holiday so it wasn't until this week that I decided to have a crack at it. What's more I'd bumped into Tom "the Wickster" Wickens at Port Meadow last week and he was interested in seeing the bird too, so on Tuesday morning I picked him up from Oxford station at 6:15 and we headed off in the Volvo towards Wales.
As we sped along the M4 we discussed the prospects for the twitch. Having done some research on the bird, it seemed that it could be very elusive at times and a posting on Bird Forum said how it had only been seen for a few seconds by a few individuals the previous day. Both Tom and I were thinking that it could be a rather long and frustrating twitch, staring at unmoving bushes for long periods of time (which neither he nor I are particularly fond of). We therefore mentally steeled ourselves for what could ultimately prove to be a long and frustrating day.
We arrived at Rhiwderin a couple of hours later at around 8:15 at the same time as a number of other birders. As we walked out to the field we could see a posse of about a eight or so birders all gathered in a rather promising small group in one place though when we got to them it turned out that this was merely because it was where the bird had been seen the previous day. Neither Tom nor I could quite understand this mentality and decided to do a tour of the surrounding hedges rather than standing in one spot just because everyone else was. We'd just done the entire length of the other side of the hedge and were looking at the dung heap back by the stile when I noticed that the twitcher contingent had moved and seemed to be looking intently into the bushes higher up the field. We hot-footed it back up the hill to find that the bird was about, creeping through the brambles along the ground and offering intermittent glimpses as it did so. A few second later and it was briefly completely out in the open within ten yards distance in all its Nearctic glory before it flitted off into the undergrowth again. 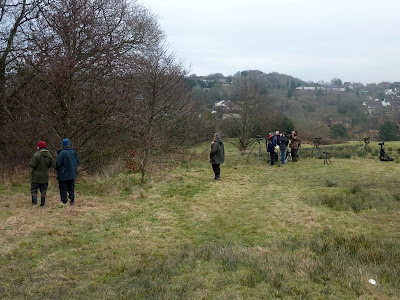 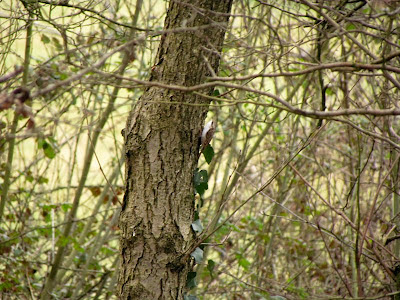 Not the yellowthroat which was so skulking that I didn't even
attempt to photograph it. However, there were quite a few
other birds around in the hedgerow including this treecreeper,
lots of siskins and a nuthatch and crossbill were heard as well. 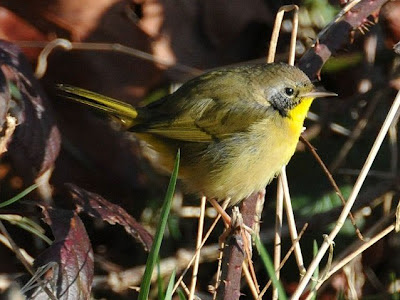 This is what all the fuss was about. Unfortunately this fabulous
photo wasn't taken by me but instead by (c) Chris Thomas
(see his great web-site: British Bird Photography)
After a while of it not showing again some people, including myself and Tom, spread out a bit further to see if we could pick it up again further along the hedge. A short while after that I managed to spot it at the back of the hedge where it gave occasional glimpses for a while before disappearing once again. After that it showed again a couple more times so after about two hours we'd seen it on four separate occasions. By now the hunger of ourselves and the rest of the crowd for sightings was starting to diminish and people were starting to stand around chatting a bit more rather than looking intently for the bird. New people were starting to arrive, no doubt keen to see the bird though they were going to have to contend with a less helpful crowd to aid them in seeing it. Tom and I decided that we were happy with our views and elected to head off.
Having done my research I suggested to Tom that if he didn't mind I would quite like to nip over to the Blorenge (the site of the famous Marmora's warbler) on the way home to see if we could rustle up some red grouse. One of the largest gaping holes in my fledgling life list are the Scottish birds and certain game birds (grouse & exotic pheasants) and embarrassingly I still needed red grouse. To be more exact, I think that I still needed it as I may have seen one as a boy before my "wilderness years" when I stopped birding but to be honest I just couldn't remember. Anyway, I'd read on Bird Forum that the Blorenge was a good site for them and as it was on the way home if going via the A40 I thought that I would give it a punt if Tom were game. He was happy to have a go so some half an hour later we pitched up at the Foxhunters car park by the radio mast only to discover that the entire mountain top was covered in a rather thick fog. This didn't look at all promising but we thought that we might as well give it a quick go seeing as we were there and at least we would get a bit of a walk before the long drive back home. Accordingly we yomped off into the foggy heather. 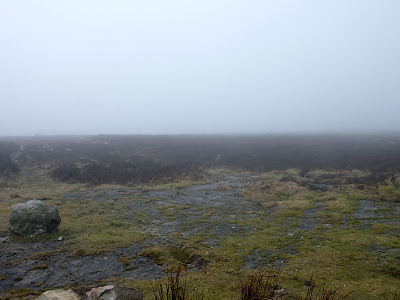 Foggy Blorenge - not looking good for grouse hunting
After a while Tom managed to spot what he was sure were grouse droppings (which look like little cylinders the same as goose does). Well, at least now I'd seen something grouse related though I wasn't so Packham-esque as to take a sample home with me. We walked down the path a bit more before deciding to go "off piste" and we started to walk across the heather. After a while we began to worry that we might get a bit lost in the fog but as we stopped to get our bearings we heard the distinct sound of a distant grouse calling. Well, at least I could now put it on my year list (which allows for "heard only") though not my life list which requires an actual sighting. We headed towards the sound but to no avail. After a while we started to head back towards the car when suddenly Tom picked out a couple of grouse in flight which I managed to see through the gloom. Result - and under these conditions quite an achievement! Now all we had to do was to get back to the car. We had a discussion and both agreed on what felt like the right way back and headed off, sure enough shortly finding a path which took us safely back to where we'd parked. 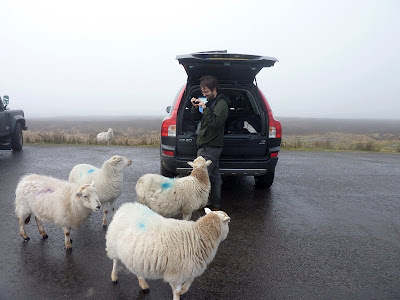 The Wickster seemed to be worryingly attractive to the local sheep
Flushed with success we headed back down the A40 towards Oxford where Tom decided to do some more work on his county year list and I chose to go home to enjoy a well-deserved cup of tea and to bask in the warm glow of a successful morning's birding. 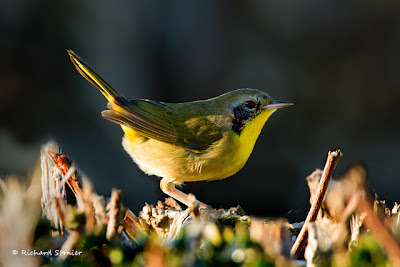 I leave you with this absolutely stunning photo
taken by (c) Richard Stonier (see his wonderful web-site)
Posted by Adam Hartley (Gnome) at 20:09