My apologies to people who have stumbled on this article having Googled some of the words in the title if this is not quite the racy stuff they were looking for. For the rest of you, rather than being a trip report, this article is an amalgamation of various snippets and thoughts about my birding.
Cormorants
Firstly, I thought that I would just follow up on my previous entry about cormorant sub-species in the county. After I'd posted the blog I spoke with Ian Lewington, our much-esteemed county recorder, about cormorants and he explained that actually sinensis are the commoner sub-species in the county now. Carbo is often found in the county, especially at winter on places such as Farmoor. However carbo is a cliff nesting sub-species and so isn't generally to be found in spring and summer. On the other hand the continental sinensis are tree nesting birds and our resident population of cormorants at Dix pit for example are all sinensis. He also explained that when using the gular pouch identification method one has to be careful as the perceived angle that it makes (see previous posting) depends on how its head is positioned and really to get an accurate measure one should observe the bird for a while, almost taking the average angle if you will. All interesting stuff.
Jizz
Now, I still very much consider myself a learner when it comes to birding. I've been at it for four and a half years now and whilst I feel that I've grasped the basics I know that I still have a lot to learn. I also appreciate how there's no substitute for experience when it comes to birding and actually seeing birds and observing them careful gives you more more of an edge in identification than merely looking things up in a text book. Indeed one of the most satisfying aspects of birding for me is learning and improving my identification skills. I've gone on about gulls in the past a why I enjoy them so much because they're such a challenge and I feel that I've really made some good progress there despite a couple of howlers this gulling season regarding my mis-identification of Caspian gulls. I've always felt very strongly that it's through making errors that I am forced to look more closely at where I've gone wrong and thus my errors are usually the greatest spur to further learning and improvement. There are times however when I am pleasantly reminded at just how far I've come in my birding so far, in particular with regards to the nebulous things that is jizz. I managed to find a nice red-head red-breasted merganser on my local patch of Port Meadow a while ago. Now these are nice birds but only subtly different from red-head goosander but I was pleased to say that as soon as I saw it, it rang alarm bells as it just didn't look like a goosander: it looked skinny and the bill was much more slender and has a feeling of upcurve to it rather than the more solid down-hooked beak of a goosander. I was able to point out the bird to a relative newcomer to county birding who needed it for his county list and it was interesting to see just how hard he found it to pick the bird out. It just shows how far I've come already. 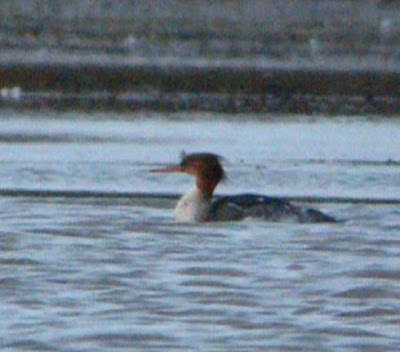 The Port Meadow red-breasted merganser
Jizz and a Shag
Now this inner feeling for jizz showed itself again the other day whilst I was again on the Meadow. I spotted a low flying bird heading rapidly southwards over the floods. It was low and quite close so I got a good view of it as it sped past. Whilst it was clearly an all-black cormorant-type of bird, my inner alarm bells immediately went off because it just wasn't the right shape or proportions at all for a cormorant which I've often seen flying over the Meadow. Instead it was small with a really strikingly skinny neck (not the thick chunky thing of a cormorant) and the wings were shorter. I watched it for several minutes until it became a speck in the distance but for those first few seconds it had just felt completely wrong for a cormorant so despite the fact that it was a flyover that I only really saw well for a few seconds I knew that it had to have been a shag that I'd seen. Not a great rarity of course but a nice bird for the county which is more or less annual but as far as I knew it was a first for the Meadow. Now whether anyone else believes me is another matter - I've made some dodgy ID claims in the past (e.g. honey buzzard over my house which I later retracted) as well as plenty of gull ID errors and I know that if some other birder reported a single-observer fly-over shag on the Meadow then (depending on who it was) I could be more than a tad sceptical. However I strongly believe that at the end of the day birding is a very personal journey of improvement and enjoyment and ultimately that's what matters so it's down on my Patch List and I'm pleased that my inner jizz radar is able to flag things up like that. 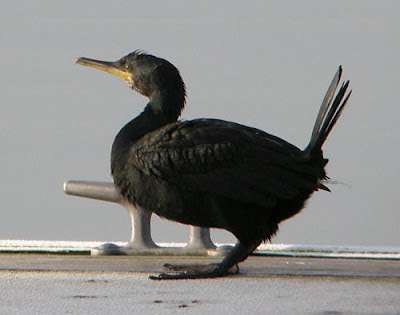 Shag
As the gull season is about over now I have been thinking of writing up the fruits of my learning from this one, especially with regards to the identification of the larger gulls. Gavin Haig at Not Quite Scilly is doing an excellent series on Caspian gull identification, starting with first winters so I was thinking of starting at the other end with adults. Partly I want to do this so that at the start of the next season this autumn, I'm able to get up to speed more quickly but also I know that even some very experience local birders find gulls tricky so it may be of use to others as well. Anyway, you've been warned that another gull post is coming though I'll spare you the excitement just yet. 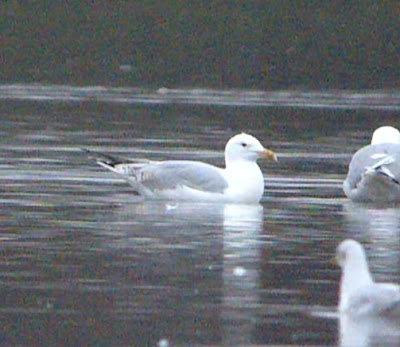 I'll whet your appetite with this bird for you to ponder over.
You can read daily patch updates including
gull reports at Port Meadow Birding.
Posted by Adam Hartley (Gnome) at 08:50