I don't often go to Norfolk (in fact I've been precisely three times previously) as it's beyond my self-imposed two hour travel limit. However, I am starting to realise (I know, I'm a bit slow to catch on) that this does rather limit me, especially with regards to seeing drift migrant species that appear on the east coast in the autumn and that if I wanted to see these sorts of birds then I was going to have to pull my finger out and make a bit of an effort occasionally. Now a collection of migrant goodies had turned up in Norfolk to focus my mind on this issue with Booted Warbler, Red-breasted Flycatcher and Barred Warbler being the highlights so I thought that I would make a bit of an effort and see how I got on with it. In the past I've usually driven up the night before, stayed in a B&B and then enjoyed a full day's birding before driving back but this time I thought that I'd have a crack at the full-on endurance all-in-one-day round trip. I set the alarm for 6am but, similarly to the Baillon's twitch, I didn't sleep that well and was wide awake by 5am so decided to get up and get on. By 5:45am I was out the door and with the Sat Nav set for Burnham Overy where the Booted and Barred Warblers were, off I went. By a little after 9am, after a quick diversion to drive once around the Wolverton Triangle (no luck of course) I arrived at my destination feeling rather tired but keen to see what was about. 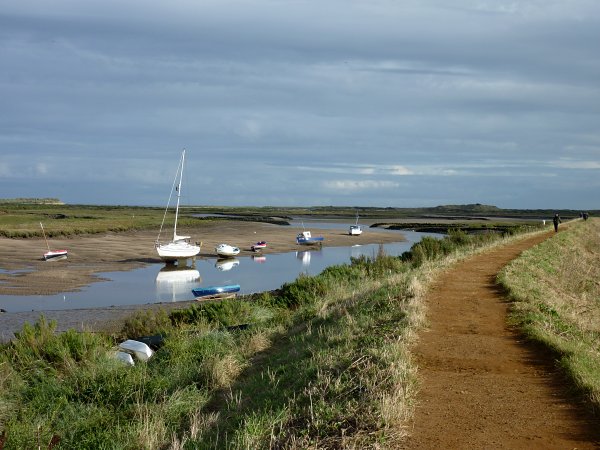 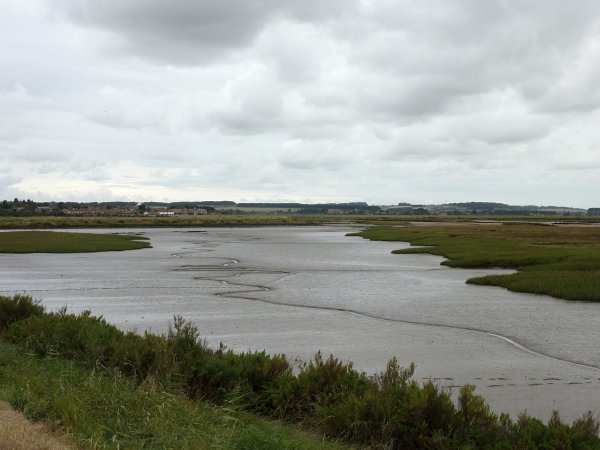 Burnham Overy is rather picturesque


The only Norfolk RBA text en route had been the Barred Warbler which was still present in the dunes there but as I was getting my gear out of the car the Booted Warbler reported in as well so it looked like I was in luck. I wandered along the bank with the estuary on the left and fields to the right. A huge flock of Pink-footed Geese flew over, honking loudly as they went, always an impressive sight. A few Bearded Tits were "pinging" away in the reeds as I walked and Redshank were calling plaintively from the mud flats. Skylarks would regularly fly over calling and the weather was pleasantly warm and sunny with little wind. All in all it felt good to be there with the possibilities of some nice birds just a short walk away ahead of me. 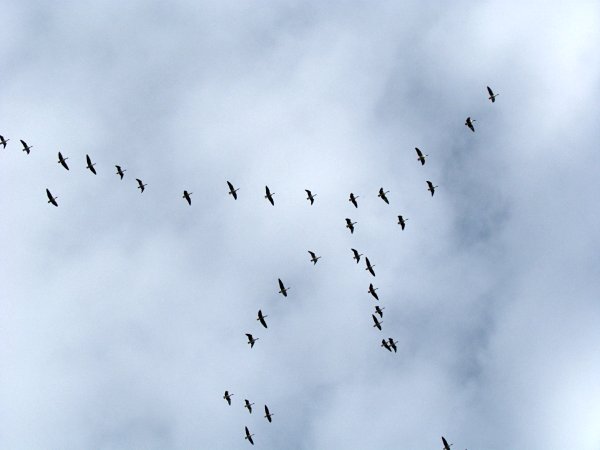 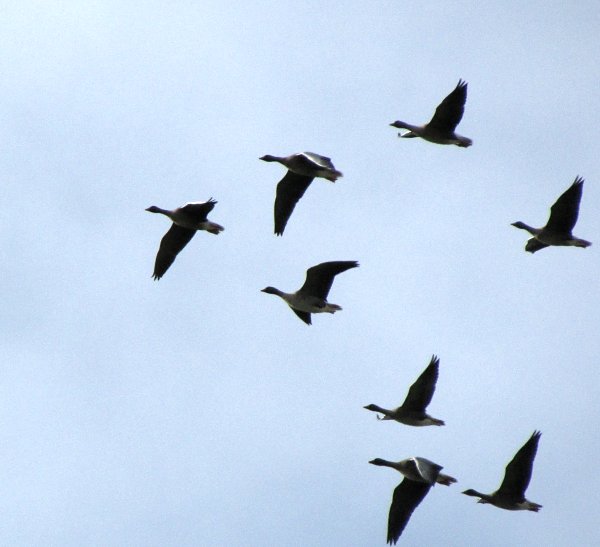 
The previous day the Booted Warbler was being seen towards the end of the bank as it neared the dunes but there were surprisingly few birders around in this area though I could see a small crowd staking out the brambles in the dunes where presumably the Barred Warbler was. Below the bank was scrub and Suaeda (I had to look up what this was, it's a succulent-leaved plant that you tend to get in coastal locations) and the Booted apparently was roaming around in this area. There were quite a few other birds kicking about with Reed Buntings and Linnets a plenty and several other warblers such as Chiffies and Willlow Warblers all to look through. Soon enough someone spotted the Booted. It turned out to be quite easy to pick out with it's remarkably pale brown colour. The bird was very mobile, continually popping up and flying off to another section which made it very difficult to try and photograph. On one occasion I had a clear view and was trying to get a shot when some SLR-toting tosser stepped literally right in front of me (and he knew I was there) so desperate was he for a killer photo. Anyway, I didn't manage a shot myself but got plenty of good views of the bird. It's shape was rather striking as well: the curve of the body went in quite sharply at the under-tail coverts which contrasted with the long stiff tail to give a distinctive profile shape. I was glad that there was no wind though as it would have been much more difficult trying to spot it in windy conditions. After a bit of background reading the previous day I'd discovered that Booted Warblers (considered conspecific with Skyes until a recent split) breed from Central Russia to Western China and then migrate to winter on the Indian sub-continent so this poor bird was way off course, no doubt driven by the strong easterlies and perhaps also a poor sense of direction. 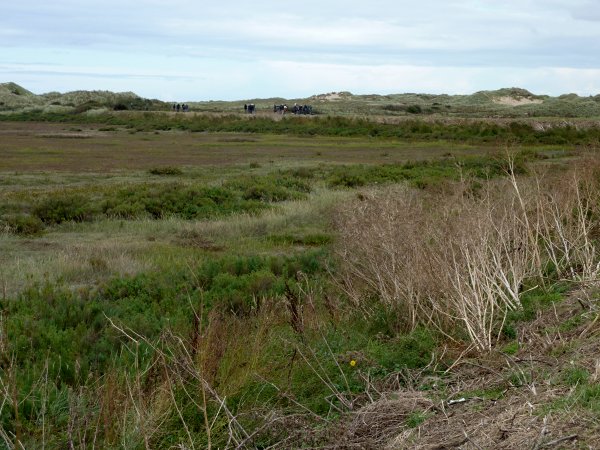 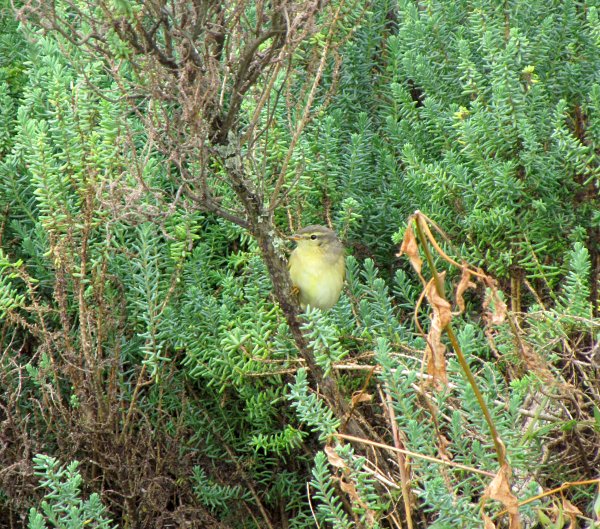 This Willow Warbler was more willing to have its photo taken


Next it was on to the Barred Warbler, located in a patch of brambles by the start of the boardwalk. Here a group of birders were staring intently at the brambles where periodically the Barred Warbler would fly out and into another patch. Apparently it wasn't really showing other than flight views but I joined the crowd and pretty soon had seen it fly across several times. They really are hulking great things as warblers go, much more chunky than the accompanying Reed Buntings that were also flying about. After a while I realised that I wasn't going to get any better views than that and so I went for a wander in the dunes where there were mipits and Wheatears flitting about. Someone else reported some Whinchats and Redstarts there as well though I didn't see any myself. 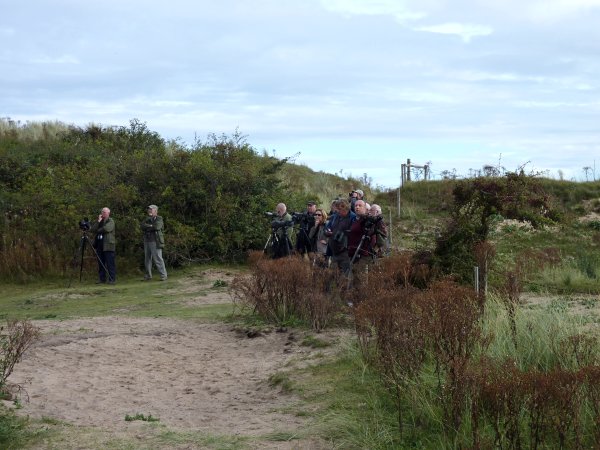 Staking out the brambles for the Barred Warbler


After a while I went back for more Booted Warbler action and then decided that I'd better move on to my next target which was to see if I could connect with any of the Red-breasted Flycatchers which were about. Yesterday there'd been three (one at Warham Greens, one in Holkham pines and one at Holme) though RBA had been ominously silent on this front despite a Gnome RFI request. In the absence of any news I thought that I'd stick to my original plan and try Warham Greens first and then Holme on the way back. Some twenty minutes later I arrived at the Garden Drove (the westernmost of the three tracks that lead north to the Warham Greens area. I parked on the hardstanding half way down and headed down the track where I soon met up with a couple of other birders. They'd been there for quite some time and hadn't managed to find the Red-breasted Flycatcher at all though they've found a Yellow-browed Warbler, a Pied Flycatcher and a Redstart for their troubles. We hung around for a while and I soon managed to see all three of their birds working their way back and forth through the trees near the copse. However, the RB Fly was conspicuous by its absence. We did spot a buzzard flying by that looked possible for a Honey though we never got good enough views of it to be certain. In the end we had to admit defeat and headed back up the track to the cars. 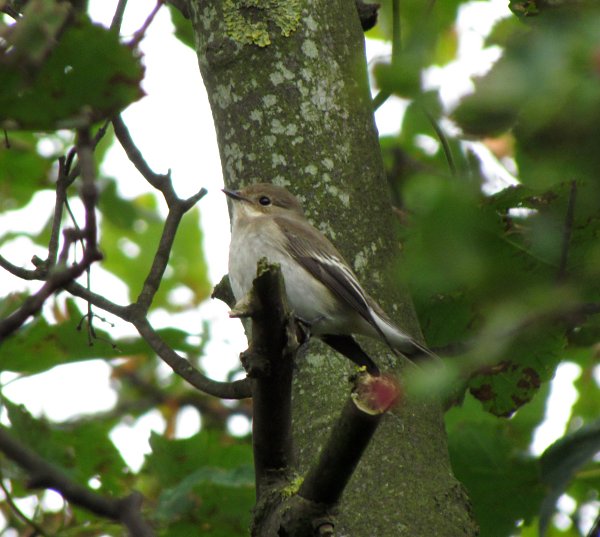 Warham Pied Flycatcher: it was hard work trying to photograph highly
mobile birds in the canopy and I failed with the Yellow-browed though
the Pied held still for just long enough for me to rattle off a few shots

My final destination was Holme though there'd been no news on the Flycatcher there either and I didn't hold out much hope. Nevertheless I thought that it would at least be interesting to pop in in order to acquaint myself with the site. Holme consists of two nature reserves: the NWT area with a car park guarded by a pay hut (thankfully closed) and at the end of the track the NOA reserve. I first parked up in the NWT car park and had a quick wander around. A couple of birders there were on the bank waiting for the juvenile Rose-coloured Starling to fly over. It had been reported that morning but they'd been there for hours without any luck. Some enquiries about the Flycatcher confirmed my fears that there'd been no sign of it that day. I therefore did a token tour around the scrub area by the car park and then drove on to check out the NOA area. There in the car park and with no realistic prospects of finding the Flycatcher I started to feel rather tired with the early start and lack of sleep catching up with me. Accordingly I had a forty minute "power nap" before deciding to head back home.I stopped off at Wolverton again and did the longer circuit around both parts of the triangles. At one point I got all excited when a game bird crossed the road but it turned out to be a Red-legged Partridge. The journey home was largely uneventful apart from getting stuck on a one junction "short-cut" on the M1 for three quarters of an hour. I arrived back at around 7pm very tired but pleased with my day trip to Norfolk and it's top birding action. 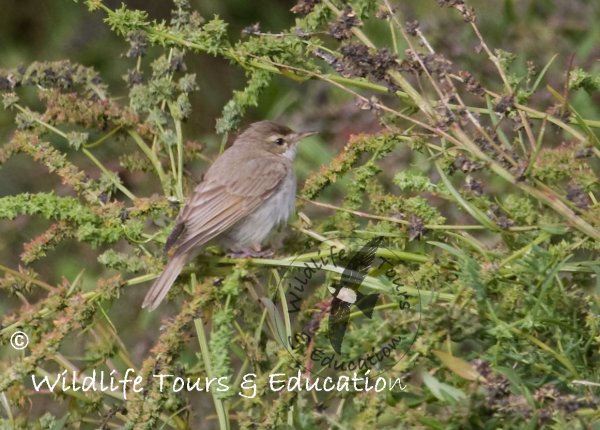 As a reminder for me if no one else, here's a picture of the Booted Warbler
taken by Carl Chapman (c) (Wildlife Tours & Education)
one of the co-finders of the bird
- see the account of the find here: Letter from Norfolk

Addendum
As I write this up I see that there's been no sign of either the Booted or the Barred Warbles in Norfolk today so it looks like I was lucky in getting them on their last days there. This only adds to my sense of satisfaction with my trip!
Posted by Adam Hartley (Gnome) at 15:33