Twitching at the Pits of Desolation

I've not been birding anywhere other than my patch for about a month now. Since I came back from Cornwall, it's been strictly Port Meadow for all my outings. Not that this has been too burdensome of course, what with the American Golden Plover and also a rather nice Caspian Gull to keep me occupied. However, even Port Meadow becomes a bit "samey" after a while and I was starting to feel the twitch itch again. Now, there'd not been much about for me to go after of late so when a White-rumped Sandpiper turned up only an hour away in Staffordshire a couple of days ago it soon caught my attention. It's initial status was "reported" on Tuesday evening but it was then seen all day on Wednesday. I would have gone then but my VLW had gone to London for the day so I was stuck holding the family fort. So on Thursday morning I was on standby with only thick fog in the Midlands preventing me from setting off "on-spec" straight away. Given the foggy conditions I decided instead to wait for news since if it was still around it should probably be twitchable for the rest of the day. A minor work emergency kept me occupied for a while until at around 10:30 the requisite RBA text came through and I fired up the Gnome-mobile and headed up the M40. Thanks to my trusty free iPhone sat nav app ("Navfree GPS" - I can thoroughly recommend it) a little over an hour later I arrived at Middleton Lakes RSPB car park with a "still present" text en route to encourage me.


It was still foggy and rather chilly when I arrived so I put on all my gear including waterproof trousers for extra warmth and two fleeces under my thick winter coat. I decided on my walking boots rather than the RBA-recommended wellies as I find the latter make my feet too cold after a while. After a twenty minute yomp through what were at times indeed extremely muddy conditions I arrived at the correct pit having warmed up nicely from my walk. A handful of birders were gathered at the scene where it turned out that the bird had last been seen about half an hour ago but it had appeared to have gone behind a rather large island on the far side of the pit and it had not been seen since. I settled down to wait and surveyed the scene. It was not the most attractive of places: the complex consisted of a series of old gravel pits now flooded with water though for some reason the bird had today chosen the one pit which was being actively excavated and two huge mechanical diggers kept up a constant racket in the background. This particular pit was made up of gravel and mud with nothing much growing on any of the islands within it. What with the thick fog, the infernal racket of the diggers and desolate landscape it had rather an air of despair about it - very Mordor! 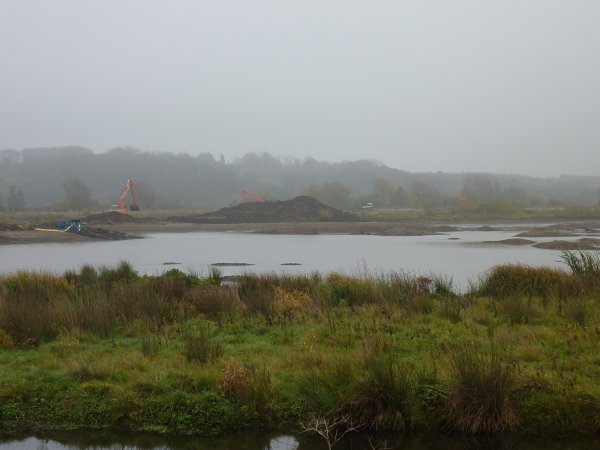 
It was at this point that I realised that I'd left my packed lunch back in the car. Now I have the kind of metabolism where I like to eat regularly, I don't need to eat very much at a time but it needs to be regular or I can often start to feel rather light-headed. I wondered how long I could last before I would have to slog back to the car to go and fetch my food and hoped that the bird would show fairly soon. To add to my growing feeling of gloom the bird appeared to have disappeared. Half an hour passed, then one hour, then an hour and a half and there'd been not a sniff of it - it was getting close to my usual two hour hanging around tolerance limit. A couple of Green Sandpiper picked their way around the islands, a Kingfisher sped by and a Redpoll flew over calling but there was little else. Periodically I would try viewing from a different angle, hoping that I might be able to spot the bird that way but still no luck. It crossed my mind more than once that if the bird had moved on to another pit then there wouldn't be much chance of finding it. This all reminded me of a twitch to Deddington in Cambridgeshire a few years ago for a Buff-breasted Sandpiper that was last seen 10 minutes before I arrived and never showed again. It was a similar gravel pit location with a similar progressive realisation that I was going to dip horribly. After a while a few of us wandered the few yards over to the North Pit where it had been all day yesterday and had a scan around. Here the numerous islands were much lower and it was generally easier to see what was about: three Redshank were the highlight but there was no sign of any Nearctic vagrants.


It was at this point that the word went up that someone had the Sandpiper! We hurried back to the original pit discover that far from being behind the far island, it had appeared on one of three tiny islets no more than a few yards across right at the front in the left-hand corner. It seemed quite happy there and spent some time working its way around the islets whilst we all watched and attempted to take photos in the gloom. I quickly decided that video was going to be the best approach in the conditions and managed some reasonable footage given the circumstances. The bird had it's trade-mark long primary projection with the feathers crossing at the end behind it, pale-fringed dark brownish coverts and flight feathers but a rather plain dark grey mantle, nape and head. The supercilium was rather muted with a reasonably slim slightly down-curved bill and white marks around the base of the bill (reminiscent of a ruff perhaps). The breast was rather grubbily streaked though the cut-off line was fairly clean giving way to clean white underparts. When it flew from one islet to the next one could see it's lovely white rump. All in all a gorgeous bird and worth hanging around in the freezing fog for. 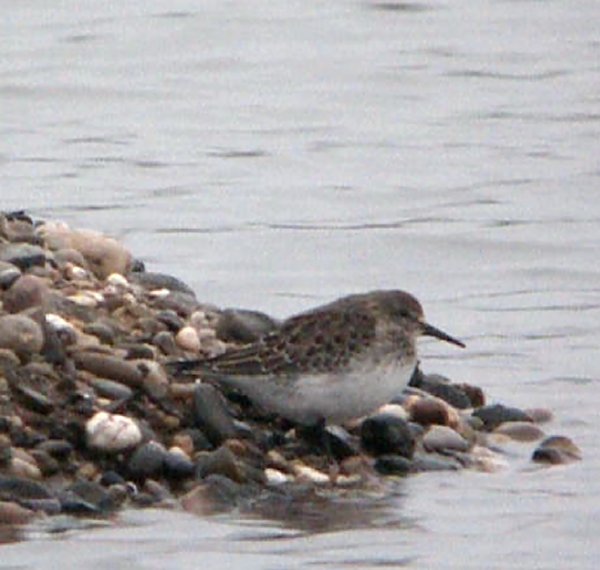 
...and some video footage. You can hear the constant racket of the diggers.


I spent some time enjoying the bird as it worked its way around the islets about fifty yards from us. After a while people gradually started to drift away and I too eventually slogged my way back through the mud to the car where I wolfed down my lunch before firing up the Gnome-mobile and setting the co-ordinates for home, arriving back just as it was starting to get dark. It would have been a very gloomy return journey had the bird not been seen but thankfully I was able to bask in the warm golden glow of a successful twitch, having snatched success from the jaws of horrible dippage at the Pits of Desolation.