As you will have noticed from the lack of posts on this blog, apart from regular visits to my local patch at Port Meadow, I've not been out birding much of late. It's all down to the weather of course, this horrible grey bone-chilling coldness that's sitting over the country at present, keeping the spring out. Nevertheless, spring vagrants had started to battle their way to our shores despite the weather: the first trickle of migrants had started with the odd Wheatear, a few Sand Martins, a Black Redstart and a Ring Ouzel appearing in the county. In the country the first overshoots had started to arrive  with a Red-rumped Swallow and a Hoopoe (that subsequently died) on the Scilly, a Bluethroat and a Kentish Plover (the latter a bogey bird for me) down at Portland. So, despite the weather, things were actually starting to kick off.


It was with this backdrop that news broke on Monday morning, via the Badger Text Alert, of a possible Ferruginous Duck on Otmoor that had been found by one of the wardens. The warden had been adamant about the ID but had only seen it briefly. Team Badger set off to investigate. Myself, I'm a bit more of a lazy twitcher: unless it's close by or on my patch I'll wait until someone else (often Badger) has checked it out first before setting off. Of course this will mean that I'll miss a proportion of birds but as my twitching brownies points are limited I have to be selective. A couple of hours go by, I'm staring out of my office window at the freezing coldness and hoping that the bird isn't found or it turns out to be a Tufted Duck or something. No such luck: Badger called to say that it was a Fudge Duck but it was very elusive, skulking around in the reeds. "Oh, and it's absolutely freezing out here", he added. Bugger! Now, I don't actually need Fudge Duck for my county list thanks to a sighting that I had a few years ago on Port Meadow. Now, it's not on any official records so perhaps it's time that I tell the story and perhaps actually submit the record. It was the autumn of 2007 and I'd only just taken up birding again. I was down on Port Meadow by Burgess Field gate looking through all the ducks with my ancient binoculars that were all I had back then. Whilst I watched a duck flew in, landed close by and started swimming actively through the other ducks. I remember it to be a really striking bright mahogany colour, not like anything that I'd seen before. I had just enough experience to think that it might be a Ferruginous Duck though I'd never seen one. It stayed for less than ten minutes before flying off. Back then I didn't know anything about reporting sightings etc so it just quietly went on my list. With hindsight I never checked anything like the undertail coverts or the nail on the bill etc so I didn't rule out any hybrid possibilities but at the time to my inexperienced eye it looked just like the one in my new Collins bird book when I got back home to check. Since then I've seen others out of county but that sighting has stayed on my county list. With that "unofficial" tick hanging over me I felt that perhaps I should make an effort as an "insurance tick" against my then-inexperienced ID. Thus it was that I packed my gear into the car, put on as many layers as I could physically wear and set off for Otmoor. Of course the bird was right by the second screen, as far away as possible and by the time I'd yomped over there I was actually feeling quite warm in all my layers and had to unzip my coat. En route I'd seen a lovely Barn Owl sleeping out on a post behind the feeders though Peter Barker later informed me that it had been there all morning so perhaps wasn't too well. I met several people coming back from the duck including Dave Doherty, Bark and Paul Greenaway, all who had successfully seen the bird. 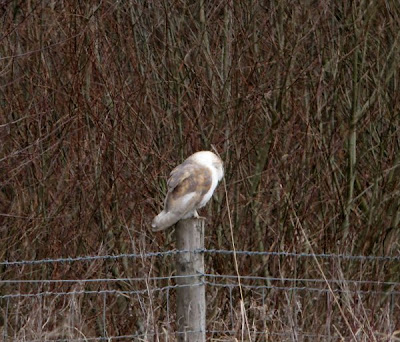 Up by the second screen I found Terry Sherlock, Badger, Roger Wyatt and an unidentified birder all huddling behind the screen and looking cold. It turned out that the bird had been seen three times in total: twice in the last channel before the second screen and once in front of the screen though it had flushed when the rest of the gang had rushed up to see it. I joined them in staring at the water by the second screen for a while with the wind blasting straight into the screen and through the viewing gaps in an unforgiving manner. Unlike Farmoor and Port Meadow, Otmoor is full of hiding places for birds and it could be skulking anywhere in the reeds and with this wind would probably want to remain hidden away in their shelter. It was a Herculean task - I wondered just why I'd bothered to come out. 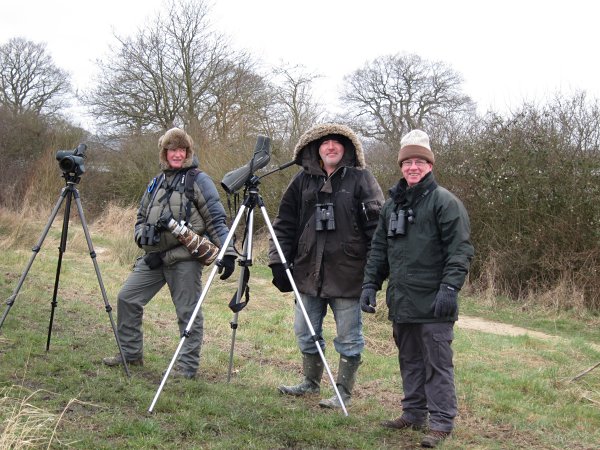 Terry, Badger and an unknown birder


After a while Roger went for a walk to warm up. I chatted to Badger about this and that and then Roger hurried back to ask if we'd seen the bird as he'd just flushed it from close by. Doh! we'd been too busy chatting and had missed it. I blamed the cold for my lack of concentration. A short time later I was getting too frozen so decided to go for a stroll to warm up and Roger joined me. We went to stare at the channel again where it had been seen most often. Of course viewing was difficult and restricted and one had to move around to see different parts of the curving channel. Roger told me that actually he'd flushed the bird from a smaller side tributary between us and the screen. At that point the unidentified birder came towards us and flushed a duck from the same tributary. He then rushed up to say that that had in fact been the Fudge Duck and this did indeed tally with what I'd seen in flight. We managed to see it in the channel briefly and Roger rattled off a few shots though it's back was to us, it was distant and it quickly swam out of view. We called over Badger and Terry and we all stood around, chatting and staring at the channel. Now that I'd actually seen the bird I was more relaxed but also starting to think about home, food and warmth. Paul Chandler came and joined the throng. The duck showed no immediate sign of reappearing and so I decided to head back to the car, meeting the Wickster and Peter Law coming the other way en route. I nipped in to the New Hide to scan Ashgrave for the White-fronted Geese but couldn't see them. Apparently there is a hidden section of the field where lots of the birds congregate so they almost certainly were there but out of sight. Back by the feeders the Barn Owl was still there, poor thing! I reached the sanctuary of the car and sped off home, happy to be out of the cold. 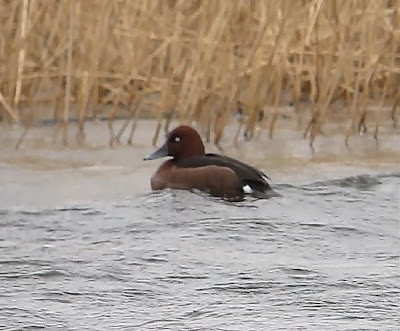 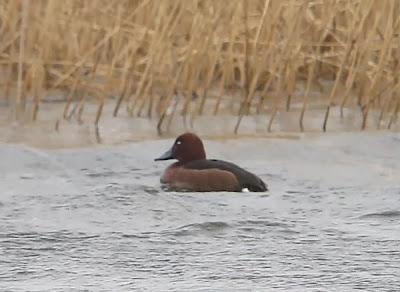 I later learnt that the bird wasn't seen again that day after my sighting so I'd been lucky and with my unofficial tick now backed up with a proper (albeit brief) sighting I could relax. Let's hope it sticks around and is more co-operative so that those who want to can get to see it. For myself, I hope that the next one of what is a rare bird in the county is found in warmer conditions with easier viewing.
Posted by Adam Hartley (Gnome) at 12:11