I got an e-mail from Cornish birder John Chapple (see his great blog here) a few weeks ago. I've got to know him over the last few years from my regular trips down there. Indeed I first met him when he and I co-found a Greenish Warbler at Treve Common, shortly before John came up with a Melodious Warbler in the same ditch. As well as birds, John is very much into the butterflies and dragonflies (a direction I am clearly following as well) and he was very keen to see Black Hairstreak, which he'd not seen before. Here in Oxon we're blessed with several great sites for this rare butterfly close at hand so I gave him some details but told him that, like everything else, they seemed to be running several weeks late this year. Last weekend the first Black Hairstreaks were seen so it was that he decided to come up this Sunday to have a crack at them and I arranged to meet up with him to show him where they were.


Sunday dawned and he'd clearly managed to jam in on some great butterfly weather with some good periods of sun forecast for the middle of the afternoon. He was driving up from Cornwall that morning but managed to make good time so I was rather caught on the back foot and left the house rather later than I should have done. We rendezvous'd at Bernwood Forest car park at around 10:30 a.m. where he and his party had been waiting a little while. Also with him was his partner Kate Jones (a Cornish wildlife photographer - see her great blog here) and Paul Browning (I hope I've correctly remembered his surname) a very keen Cornish butterfly enthusiast. I said my apologies and we set off on the long walk down to the mysteriously-named M40 Compensation Area. En route there was little of note apart from a Ringlet and a few Large Skippers. The last part of the walk is somewhat off piste though fortunately, having been there last year I was able to guide the party straight there.


The Comp Area is a great bit of habitat though in a terrible location, being literally right next to the noisy M40. Indeed the best butterfly sites there are right next to the motorway itself so it's far from tranquil. Inside the Area there were a few other people and it wasn't long before we'd at least had our first sightings of the elusive Black Hairstreak though they were brief and rather high up. The weather was perfect and it was warming up all the time and as we worked at it we were rewarded with progressively better and better views. Paul turned out to be a bit of a butterfly whisperer and had a great knack for turning up ones resting low down and offering easy views. Unfortunately I soon discovered that my super-zoom camera battery was flat and I didn't seem to have a spare with me (most careless) so I had to resort to my old Panasonic Lumix Point & Shoot which I mostly use for my mothing these days. Still the light was perfect and though the zoom was a measly 12x I managed some acceptable shots in the circumstances. 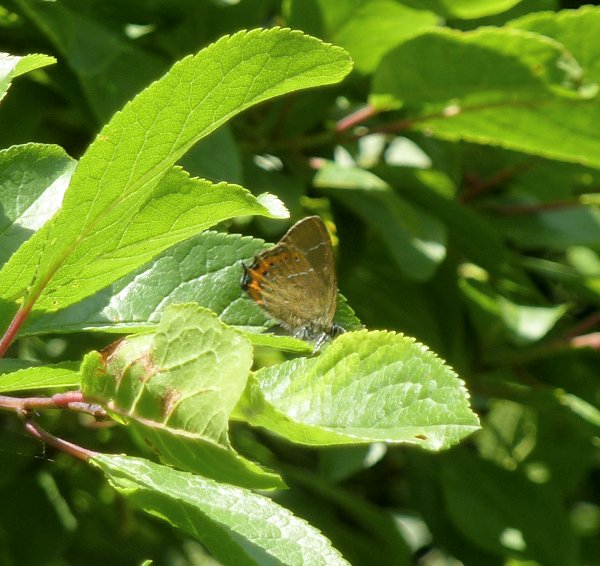 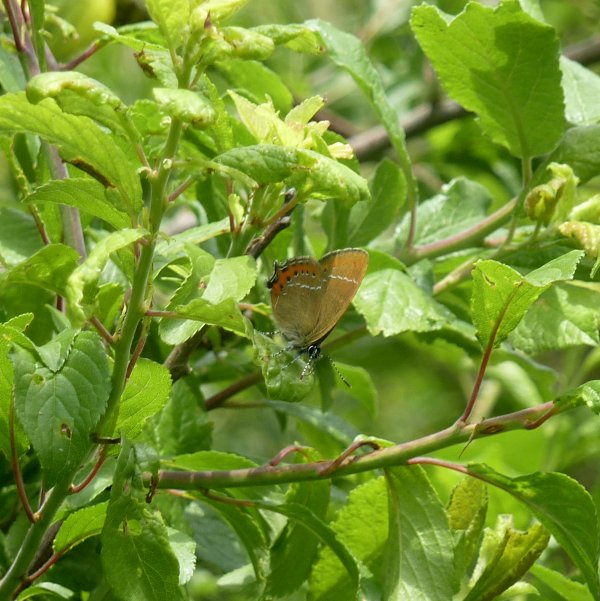 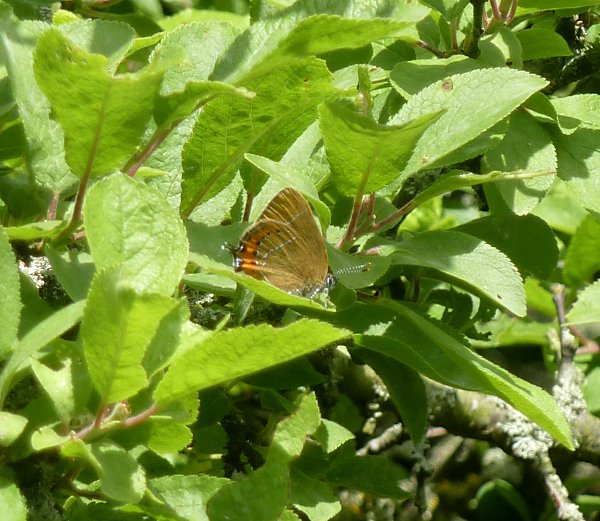 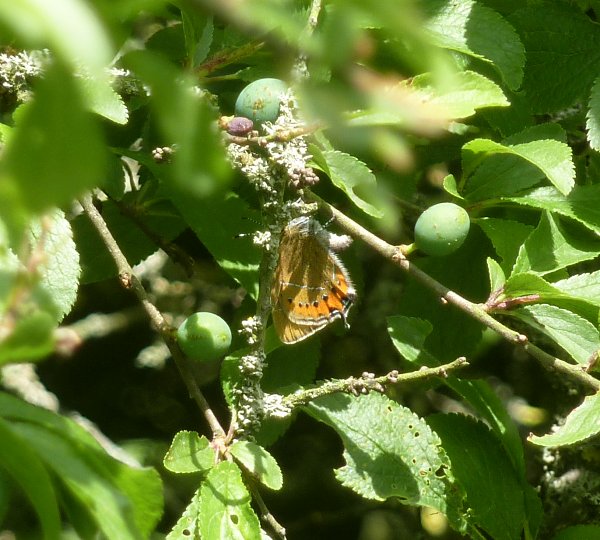 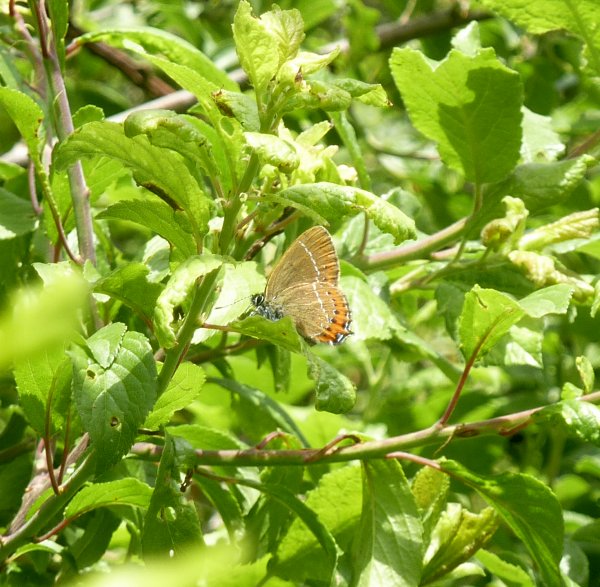 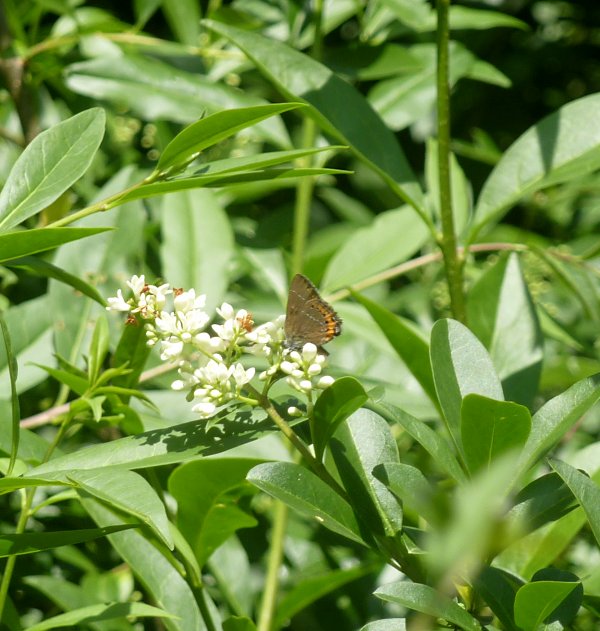 There were also plenty of other buggy wonders to delight in, including various moths and damselflies. 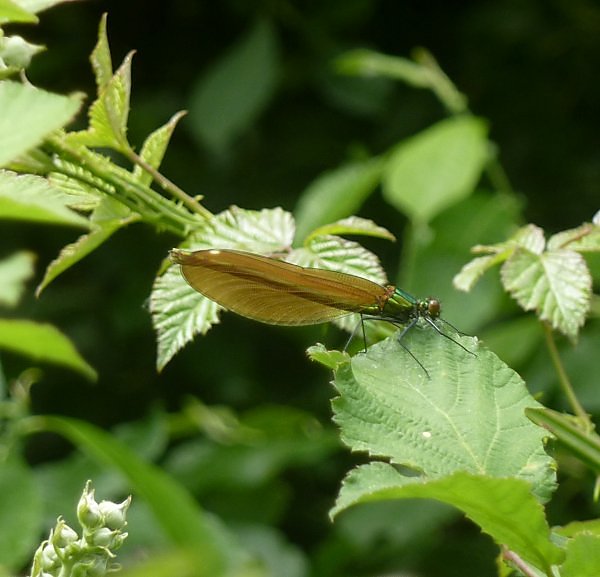 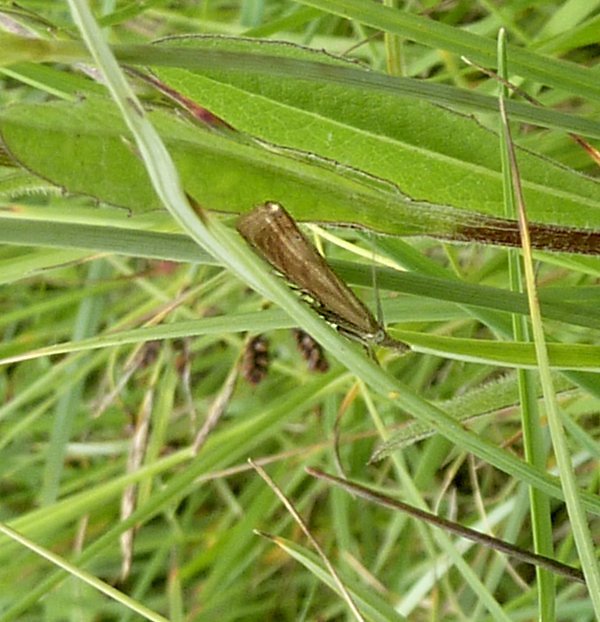 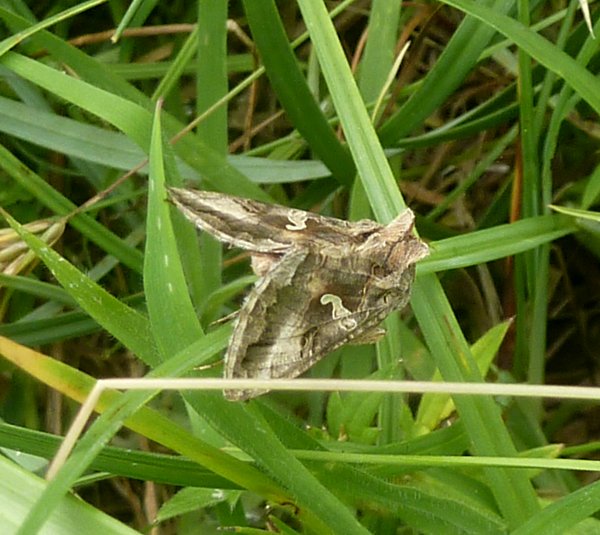 
As the day wore on more and more people turned up and it became a bit of a bun fight at the top hot spots where by now they were showing every few minutes and nectaring on the privet blossom. Ewan Urquhart arrived and we had a natter. Apparently Badger was also on his way but he'd got lost in the woods. He called me up and I gave him directions though they obviously weren't good enough because a while later he called again, lost on the final off piste section and we had to send out a search party to bring him in.


Badger and John are both into making videos and once I'd introduced them they soon started talking shop. Meanwhile, Lissie (Badger's better half) showed me some great insect binoculars she had which can focus down to 50 cm - they were really good and Lissie suggested that Luke (my seven year old) might be interested in a pair. After a while I decided that I'd had my fill so I said my farewells and wandered back to the car with a just a couple of Broad-bodies Chasers of note on the way back. 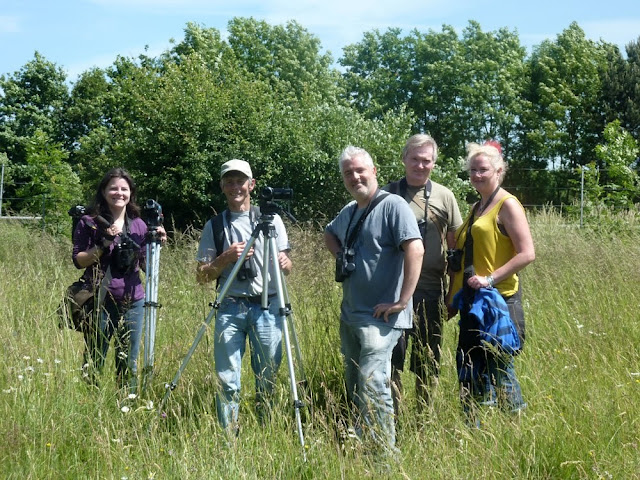 From left to right Kate, John, Badger, Ewan and Lissie

You couldn't really have asked for a better day of Black Hairstreak hunting: in glorious weather and great company we'd had several dozen sightings of who knows how many individuals. A grand day out!


I leave you with some superb video shot by John Chapple (c) (see his youTube channel & his blog). 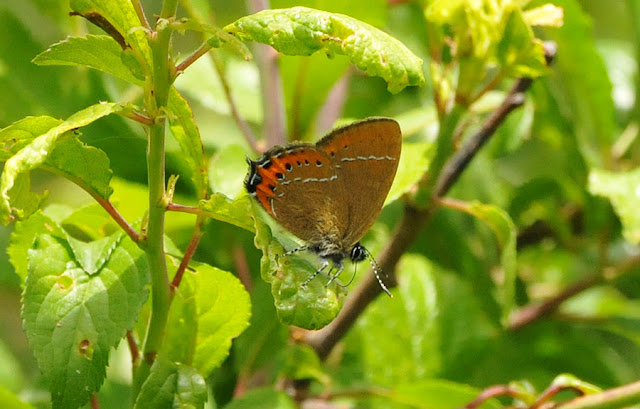