Farmoor is having a great autumn in terms of good county birds. It's already scored four Bonxies, a Gannet, a Slavonian Grebe and the recent Red-necked Grebe that I twitched a couple of weeks ago. Yesterday it struck again in the form of a juvenile Arctic Skua. The first I heard of it was when I was hanging around whilst my daughter had her Tae Qwon Do class. A Badger text came through saying that an Arctic Skua "was still present at dusk" at Farmoor. "Still present?" I pondered - that was the first that I'd heard of it. It turned out that Barry Hudson had found it at around 4pm but hadn't been sure of the exact ID so didn't want to put it out until his photographs had been checked. Meanwhile Nic Hallam had independently stumbled across it on the causeway as he was driving back from his nightly gulling session. Barry had thought that it didn't look that well so there was a realistic prospect that it might well linger tomorrow morning. A dawn start beckoned. I made arrangements to sleep in the spare room so as not to disturb my VLW and set the alarm for 6am.


The next morning I pulled up along Lower Whitely Farm lane at about 6:45am just as Ewan Urquhart was arriving. It was most interesting to see the Reservoir "waking up" with gulls streaming off it and calling noisily. Most of the gulls had of course gone by the time we could see properly and the ones that were left were speeding off as we watched. I quietly hoped that the bird was indeed unwell and would linger - that's what county listing does to you, it turns you into a bit of an uncaring monster! We scanned away but couldn't pick it out. I heard rustling in the bushes and Peter Law, Andy Last and Barry Batchelor all appeared and set up their scopes. Shortly after that Ewan said "I think I've got it" and indeed he had. Right on the opposite shore of the reservoir, hard up against the causeway was a small dark blob. However, it was a small dark blob with a distinctive high-riding rear end and as the light improved we could all make it out as the Skua. Shortly after that it flew off low and dropped down out of sight onto F1.


Ewan and I decided to drive round to the other side whilst the others elected to stay put. We nipped back onto the road and down a side road in Farmoor where we finally emerged on the north west corner of F1. There was no immediate sign of it and we got a call from the others that it was back on F2! We decided to head over to the causeway where we found it back on the water. By walking down a little way we were able to get some pretty decent views of it in the end. 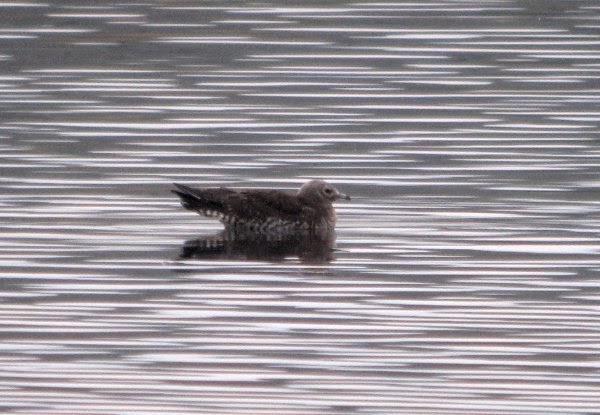 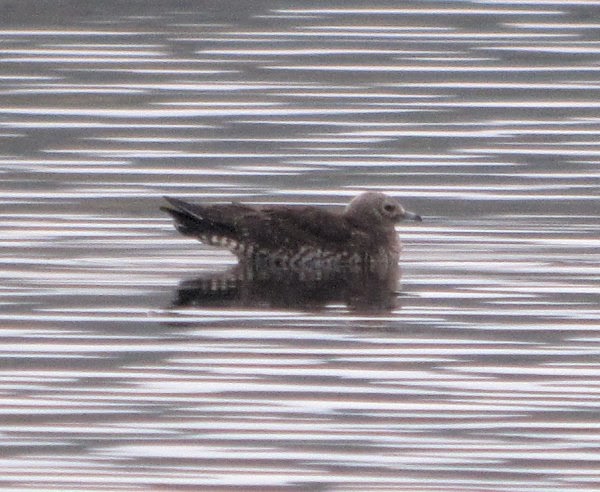 Grounded juvenile Skuas can be quite tricky to ID so I'd done a bit of reading up last night. It seems that the bill is quite a good diagnostic pointer: Arctic has a slender bill with only the tip dark; Long-tailed has a fairly short bill which is about half black and Poms have a much heavier black-tipped bill. The bill on this bird was noticeably slim, looking almost out of proportion with the rest of the bird and just the tip was black so definitely an Arctic.


After a while it flew off and started harrying the gulls. It was amazing how what looked like a very docile and indeed perhaps moribund bird suddenly shot to life, twisting and turning as it chased a couple of gulls with amazing speed. It didn't persist very long though and soon settled back on F1 with a rather inelegant splash.


By this time I decided that I needed to get back home to work and headed back, leaving Ewan to continue admiring the Skua. As I headed along the west bank of F1 I spotted the bird flying towards me and was treated to some great views as it literally flew low right over me. It made a dart for a Meadow Pipit that was flitting about and then carried on with its circuit of the reservoir. I could see why it's likened to a falcon in flight, definitely not the steady and deliberate flight of a Pom.


Back in the car I negotiated the painful rush hour traffic back into Oxford and the last I heard it had flown off at 8:45 to the North West. A great bird, a personal county tick and definitely well worth the early start.
Posted by Adam Hartley (Gnome) at 11:31

Great write up Adam
All the best
Ewan

Yes! I totally agree with Ewan.
The Oxonfeather