I couldn't help but notice that the Night Heron that had been loitering in a Cheltenham park last month had come back again over the last few days. Now this species isn't one that I "need" as I'd seen a self-found juvenile bird in Kenidjack Valley down in Cornwall a couple of years ago. However as that had been only 10 seconds of flight view I thought that it would be nice to see a more co-operative adult bird. I had intended to nip down there on Monday but it was L's sports day which took precedence. However today the builders were back and were going to do a bit more drilling so it was the perfect excuse for a bijou twitchette. Thus it was that at around midday, having dropped my VLW and B (daughter no. 2) off somewhere I sped off along the A40 west towards the well-heeled town of Cheltenham, home of the Ladies College and the much more sinister GCHQ.


Almost exactly an hour later I pulled up at Pittville Park, a medium sized public park to the north of the town which boasted two lakes, divided by the main road. According to the Gloster Birder web-site the bird was on the upper (east) lake towards the east end. As I headed over in that direction it was soon obvious from the small gathering of mega lenses where the bird was and I wandered over to join them.

The bird was hanging out on the opposite bank where there was some good cover and some helpful low branches that it could perch on. The water was nice and shallow under the bushes and it would spend a long time standing motionless in the water before suddenly pouncing. Apparently it's usual habit was to work its way back and forth along this section before retiring behind the thickest cover to rest and at night it would climb up into a yew tree to roost. It looked a great spot for it with good cover, a fence to keep out predators and lots of fish in the pond to catch. There was no path where it was so it wouldn't be disturbed by people walking by. It was on show as soon as I arrived and I took a few digiscoped snaps and just spent some time admiring what was a very handsome bird. 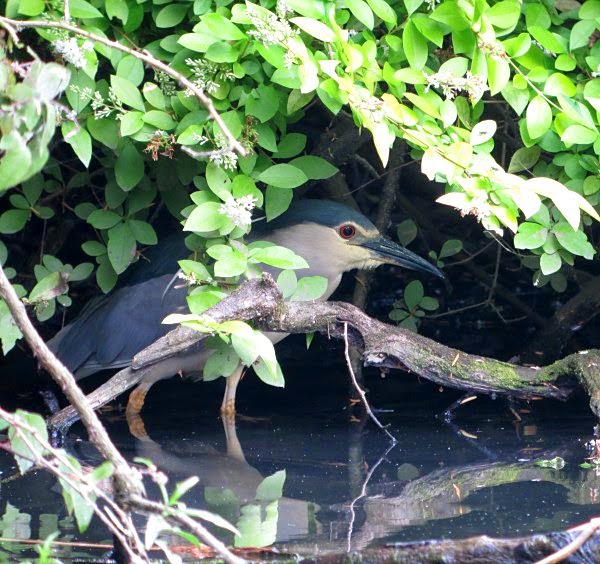 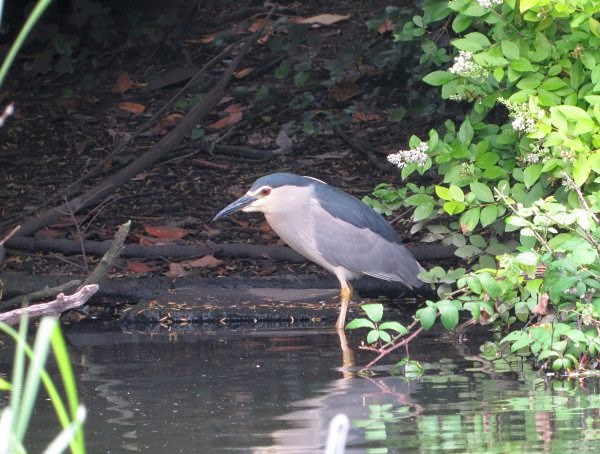 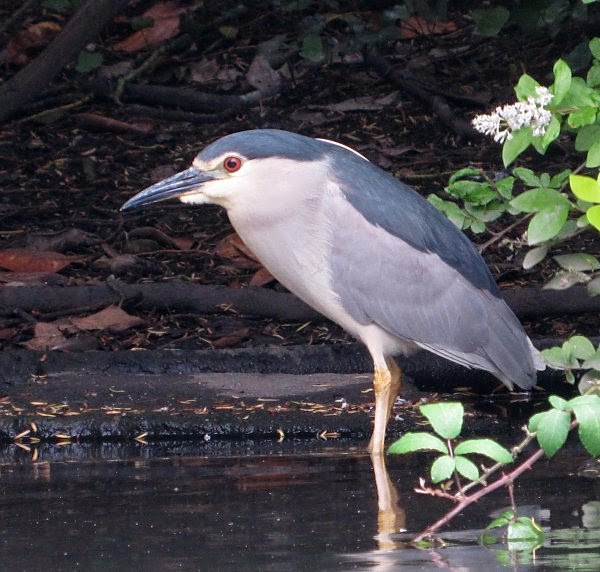 After about an hour I reluctantly tore myself away and headed homewards, stopping en route for a (rather unpleasant) petrol station sandwich. It had been a very nice little outing to see what was a lovely bird. All we need now is for one to turn up in Oxon.
Posted by Adam Hartley (Gnome) at 08:59