News broke a few weeks ago of some Bee-eaters breeding on the Isle of Wight at the National Trust Wydcombe Estate, near Niton. This is of course an extremely rare event, being only the 5th occasion that this species has attempted to breed in this country. This was in itself a good reason to visit but as this species is one that's very hard to twitch (they never seem to hang around) I'd yet to see one and so had been keeping an especially keen eye on developments there. However the first week I had too much work on, and the second week we were on our family holiday so it wasn't until the third week that I was going to be free to go. I was getting worried about missing them so despite the remnants of Hurricane Bertha shaking our shores on Tuesday last week I decided to make a dash down there. What's more, nearby (well comparatively) there was a long-staying Long-tailed Skua at Selsey in East Sussex - this would make a nice addition to my trip. Thus I put together my plan of heading off for the Bee-eaters first and then over to Sussex for the Skua in the afternoon.


I'd hummed and hawed about whether to take the car over on the ferry or to take some sort of train/bus/taxi combo on the island but in the end decided to opt for the simplest approach of just paying up and taking the car. I'd booked myself in on the 10 am ferry and having set off from Chateau Gnome at around 7:45 am I made it to Lymington at 9:30 in time to board the ferry. The half hour journey across was uneventful - I scrutinised the salt marshes by the harbour exit but there was little of note apart from a few common waders. In the ferry wake as we crossed about a dozen Common Terns would dart up and down, picking stuff out of the foamy water - a delightful sight. The wind was very strong as was to be expected but the sun was shining and I had the prospect of the closest thing to a nailed down Bee-eater ahead of me so I was in good spirits as I sipped my ferry cup of tea and watched the island inch ever closer.


I'd done my homework the previous night to memorise the route yet managed to go completely the wrong direction when I disembarked from the ferry. In the end I managed to work it out and was on the half hour journey down to the southern tip of the island. The scenery was all looking very dry and rather barren as I drove by, passing various landmarks that I half remembered from the last time I was on the island more than fifteen years ago. Eventually I found my way to the entrance to the National Trust Wydcombe Estate which was helpfully sign-posted with Bee-eater directions. 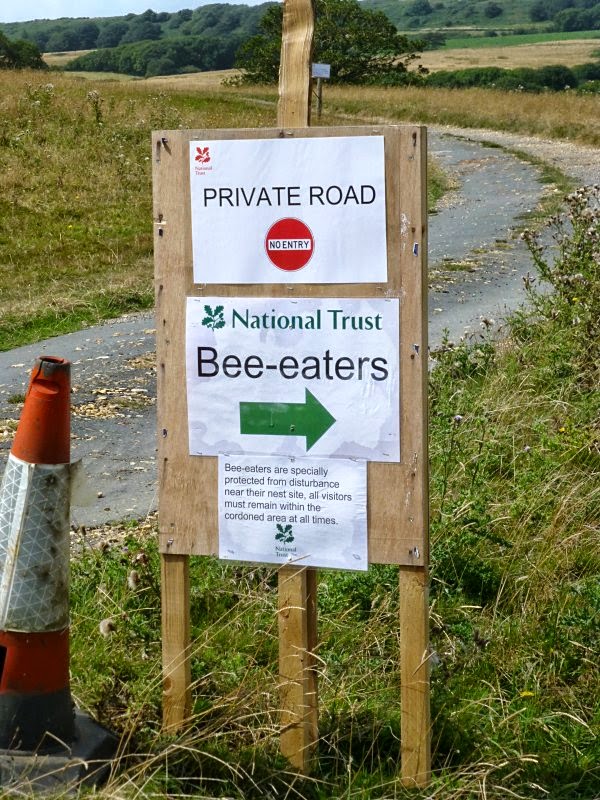 A corner of the field had been cordoned off and there was a modest gathering of twitchers in the far corner all looking (I hoped) at the Bee-eaters. 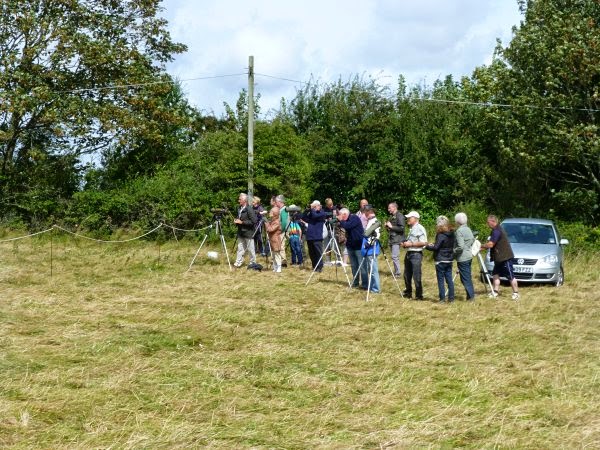 I quickly parked up and made my way over to them to find out what the situation was. It turned out that the Bee-eaters were being seen regularly every ten minutes or so though in the strong wind they were keeping lower than usual so the views weren't great.


Within a few minutes someone called out "Bee-eater in flight to the left" and sure enough there was one flying back towards the nest area with a beak full of insects. Good stuff! They were indeed showing every ten minutes or so but often very distant in a dead tree at least two hundred yards away. On one occasion one perched briefly on some telephone wires that crossed the field giving a better view. It turned out that the heat haze was really bad today and as the views were mostly rather distant it was hardly worth any photography attempts. I did have a go at digiscoping but the results were terrible even by my modest standards and I soon gave up


After about an hour there I assessed the situation. I'd rather optimistically booked myself on the 1pm ferry back having forgotten in my calculations to allow for the thirty minute crossing time. If I wanted to catch that ferry I would have to leave right then. I didn't think that I was going to get any better views in the wind and haze than I had already done and as the Long-tailed Skua was reported "still present" I thought that I'd head off to try for that. This time my navigation was spot on and I made it back to Yarmouth with time to spare. The crossing back was uneventful and I passed the time trying to photograph the Terns who were once again following the ferry


Then it was off the ferry and back towards the M27. I had just passed Southampton when ominous messages started to appear on the motorway overhead signs warning off "Long Delays on A27" which was of course exactly where I wanted to go. I ploughed on hoping that the delays wouldn't start until I could at least turn off onto a parallel road but sadly the cars started bunching and suddenly everything ground to a halt. After about twenty minutes we started to inch forward again only to find that the entire M27 had been closed off and we were being diverted off near the Portsmouth turn-off. During the stationary period I'd consulted the map and had realised that there was no alternative way to get to Selsey without going miles inland first which according to the Sat Nav was going to take at least another two hours to get to my destination. As it was getting rather late already I very reluctantly decided to abort my mission despite the RBA texts reporting the Skua as still present. I ducked off a side road and with a heavy heart headed back the way I'd come. To add insult to injury there was a huge traffic jam coming into Oxford because of the road works on the souther bypass and it took an extra thirty minutes to get to my house from the A34 turn-off.


So in conclusion a day of mixed results. I'd managed to see my main target of the Bee-eaters which was of course fantastic. However, the views had been distant and hazy which was a great shame especially for such a stunning looking bird. The second half of the trip for the Skua had unfortunately been a failure but traffic jams such as this are sadly a part of 21st century living on this crowded island. So all in all the day had been only moderately successful. You win some, you lose some - that of course is birding.

Latest news is that five young Bee-eaters have successfully fledged so there are now nine of these beauties to be seen on site. What a great result - this is only the third ever successful fledging of this species in this country! Wouldn't it be fantastic if they returned next year?
Posted by Adam Hartley (Gnome) at 10:29