After the disappointment (if I'm honest) of my low key Cornwall trip I was keen to do some comfort birding to cheer me up. I'd noticed a Siberian Stonechat (now a full species) had been present down on the south coast at Titchfield Haven for a few days so I thought that I'd indulge in a bijou twitchette as it wasn't that far and if still present, was likely to be pretty much a sure thing. Monday seemed to be a good day for this as they are generally quiet work days so I resolved to head down there that day on news of its continued presence.


Monday morning duly arrived and after I put out an RFI prompt, news came back that it was still there. I therefore cobbled together a packed lunch and headed off south along the familiar A34 on a route I knew well. I say that but I managed to find myself heading off on the western half of the M27 by mistake though fortunately I was able to duck out at the last minute on the A33 and correct my error. Despite this mistake I managed to arrive in about an hour and a half and parked up along the sea shore next to the reserve. I realised that I'd been here before (though not gone into the reserve) when my VLW and I came to visit relatives who lives nearby in Gosport. They are keen sailors and took us to see the small harbour in front of the reserve that they often like to sail to.


I popped into the reserve centre for my £3.90 entrance ticket and whom should I bump into but Oxon birder Justin Taylor, down for a quick twitch himself - what a small world! We headed off on the five minute walk to the Meadow Hide together where the bird was located. There we found a small queue of birders outside the hide waiting to get in though it turned out that you could see the twitch arena perfectly well from outside the hide and after a few minutes we'd had our first sighting of the bird. It was spending most of its time in the left hand corner of a cleared area in front of a reed bed along with four or so European Stonechats. Also present were a couple of hidden singing Cetti's, a Grey Heron, a Little Egret and a few Black-headed Gulls.


It was a very striking bird - so pale it almost looked sandy coloured with a pinkish unstreaked rump - altogether unmistakable. In the stiff wind and bright sunshine it wasn't easy to photograph but gradually as people left the hide we moved our place up the pecking order until after about an hour I decided to go into hide out of the wind to try to take some better shots whilst I munched on my packed lunch.To start with there were a couple of big lens photographers hogging the main viewing area but eventually they moved aside and I was able to get some decent digiscoped shots off. 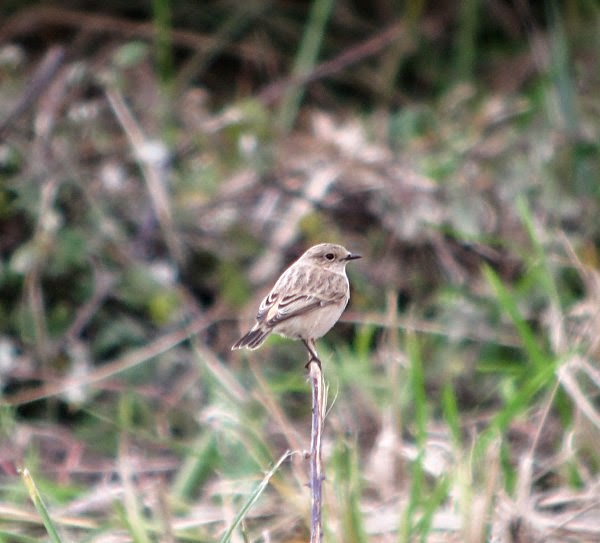 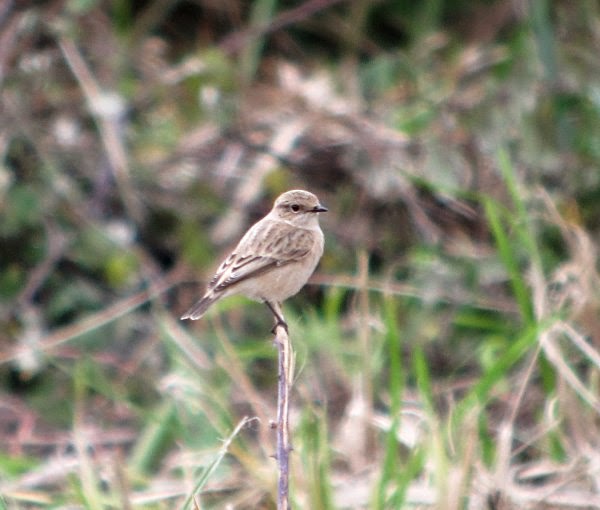 After a while I reckoned that I had some decent enough shots in the can and strolled back to the car and headed for home for the usual celebratory cup of tea with my VLW. A nice straight-forward twitch and another tick for my UK list.