This posting is a tale of two twitches. It all revolves around the long-staying Franklin's Gull that has been coming in to roost at Ibsley Water at the Blashford Lakes complex in Hampshire for the last couple of weeks. Since Franklin's Gull is not an easy bird to catch up with I was keen to see it though I'd been away down in Cornwall still when it was first found in the roost. Sadly, having been away I'd had a lot of work to catch up with so there'd been no chance of a visit for the first week. When it was still being reported over the weekend I decided to pay it a visit at the start of last week. Therefore on a wet and very gloomy Monday afternoon I set off down the A34 on the hour and a half journey to Blashford Lakes which was only a few minutes off the A31 near Ringwood.


The journey was uneventful and I arrived to find just a few cars in the car park. However on entering the hide this turned out to be because of some sort of "introduce youngsters to wildlife" evening. All very laudable but this did mean that the hide was taken up with a couple of families looking happily at the ducks. Indeed there weren't any other Franklin's seekers at all though one person did turn up a short while later who was also after it. He'd been there the previous evening when the bird had come in late though not everyone (including him) had managed to get on it before it flew off again. So there was just the two of us to look for it and my companion didn't even seem that well versed in what one looked like - not much help there then. Before the roost kicked off I had a little scan around, managing to year-tick the Black-necked Grebe there and even spotting a Duck that dare not speak it's name. Normally I wouldn't even hint at this species but the warden said that sadly the Evil Powers That Be already knew about it and were coming for it in a few weeks time. Boo!


Anyway, the gulls started to come in and were fortunately reasonably close. However as hard as I looked neither I nor my companion could find it. By 4:30 pm it was getting too dark to see properly and the warden wanted to close the hide anyway so I had to admit defeat with just a handful of Yellow-legged Gulls of any note in the gull throng. It was a rather long and weary drive back to Chateau Gnome in what was now pouring rain and wintery darkness - I was not a happy bunny.


For the next couple of days the bird wasn't sighted again and I consoled myself that I'd just been unlucky in having tried for it the day after it had departed. However towards the end of the week it started to be reported again so I resolved to have another go at it. Having thought about my failed trip I decided that the more people there were looking for it the better my chances would be. Therefore I negotiated special dispensation with my VLW to make a weekend visit which was likely to be much more popular with visiting birders. I also asked Liam Langley, a keen student birder and fellow Port Meadow enthusiast, if he'd like to come too. Not only would it be good to have some company but an extra pair of keen young eyes would also be an asset. Thus it was that on Sunday we set off on the now familiar journey south towards Ringwood.


The journey was once again uneventful though there was an ominous grinding to a half of the traffic in the opposite direction along the A31: clearly there'd been an incident of some kind. Making a mental note to find an alternative route back we pulled up in the car park to find it full of cars: clearly the weekend did indeed equate to many more visitors. In fact in the hide the whole of the front row was full of birders (including a certain Mr Bagnell of TV fame in the corner). Liam and I each found a spot in the back where we could peer over people's shoulders. At this point one of these shoulders turned round and low and behold there was Peter "The" Law who was nipping in for a cheeky twitchette on the way back from seeing the Isabelline Shrike at Hengistbury Head in Dorset. We chatted a bit and then I noticed that the body language of a couple of the seated observers a few seats along from him had changed. They were suddenly starting intently at one point and quietly saying things like "that looks like it". I pointed my scope in the same direction where there was a relatively modest number of Black-headed Gulls and scanned about. Bingo! There it was, it all it's gully loveliness, a gorgeous adult winter-plumaged Franklin's Gull. It was a very compact and petite bird, smaller than the surrounding BHG's with large white apical primary spots, a very dark mantle and a near complete dark hood, just moulted to white along the forehead and around the stubby Mediterranean-esque bill. When it flapped its wings you could see the heavy white trailing edge to the wing which contrasted strongly with the dark wing colour. 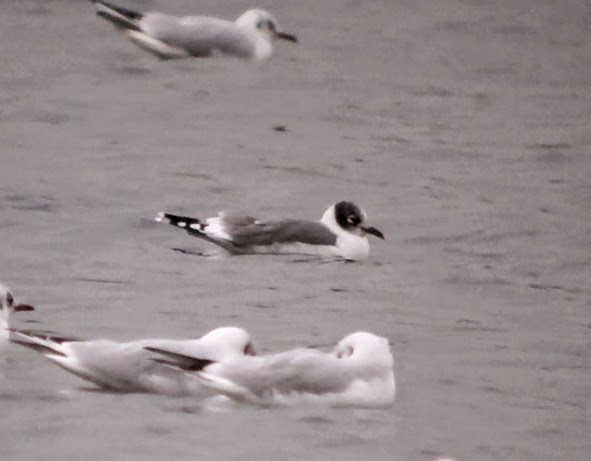 Somehow, without anyone actually calling it out, the message propagated down the line and everyone was soon on it. I tried to take some photos but as I was standing near the door I was continually being interrupted by people coming and going. Soon however, people started to leave and I was able to get a seat and start to take some shots. The bird was nice and close and the light was relatively good (I only needed ISO 400) and I busied myself with taking some snaps. 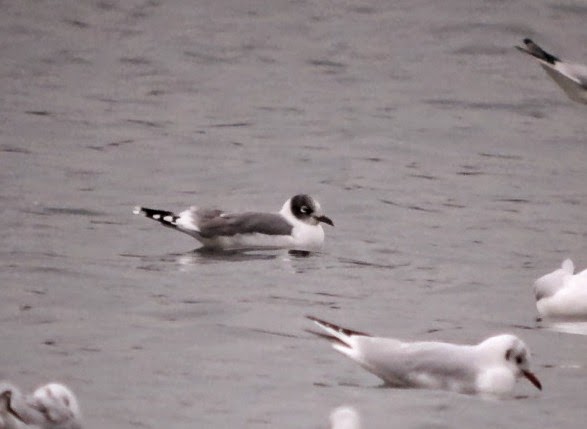 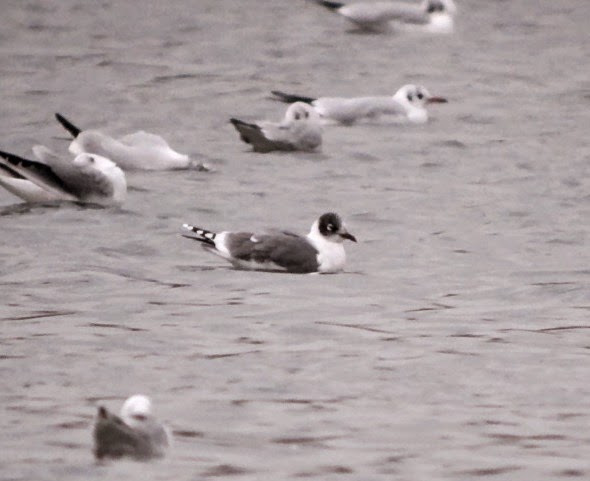 I even took a bit of video though the constant chatter in the hide and the bouncing up and down of the floor meant that it wasn't the masterpiece that it might have been!

Liam, with his usual knack, managed to pick out an interesting first winter gull. It was either a 1w Caspian or a Yellow-legged Gull though it was right at the back and hard to see properly. In the end we decided on Yellow-legged - it just didn't have that distinctive Caspian look to it. We looked around for the Black-necked Grebe again but couldn't find it though there were three Egyptian Geese and a large flock of Black-tailed Godwits of note at the back of the lake. We spent some more time admiring the Franklin's and then decided to leave early as we had to find another  route home. So it was back to the Gnome mobile and a quick glance at the map revealed an alternative route via Salisbury and the A303 which looked reasonable. The journey itself was uneventful: Liam worked on an essay on his laptop whilst I navigated us back through the busy Sunday evening traffic. We arrived back just after 6pm both basking in the warm glow of a successful outing. Unlike my previous visit, this one couldn't have been easier with the bird on show within ten minutes of our arrival in good light and at close quarters. Who could ask for more? Revenge was sweet indeed!
Posted by Adam Hartley (Gnome) at 15:14

Thought it was you. We were sitting next to you in the hide.

Sorry I missed you Karen, it would have been nice to have had a chat!