Having a Laugh in New Brighton

It's been nearly a month since my last outing and I'd started to feel those familiar urges once again whelling up within me: what with several weeks of rather intense work and my patch at Port Meadow being frozen out all last week I really needed to get out. Thus it was that I mentally pencilled in Monday for a day off to go birding. Casting around for potential outing targets two birds caught my eye: there were a pair of long-staying male Serins over in Essex (which would be a chance to get revenge for dipping this species in Rainham a few years ago) and there was also a very confiding 1w Laughing Gull at New Brighton on the Wirral peninsula. Both these birds seemed very reliable, being seen each day and whilst it was further away, in the end I plumped for the the Laughing Gull.


I always hate going on the M6 which I think stems back to some horrible journeys north in the past where we got stuck in endless jams for hours at a time. Accordingly I was a bit wary of this trip as I set off from Casa Gnome at 7:50 a.m. I treated myself to the M6 Toll road (I'm happy to pay a fiver to reduce the time I spend on the M6 itself) and in the end it wasn't too bad. The southbound M6 ground to a halt as I neared my turn-off for the M56 and there was some heavy traffic on that too but once on the M53 it was plain sailing and I arrived in New Brighton in exactly three hours as the Sat Nav had predicted.

I parked up right next to the Marine Lake which apparently was the target bird's normal location and strolled over to the pontoon which was in the shelter behind some restaurants though thankfully there wasn't that much wind today. The pontoon consisted of a central gangway heading out with three side spurs. On the furthest spur were the large gulls and a Cormorant, on the middle one were some roosting waders (Redshank, Turnstones and up to ten Purple Sandpipers) and all on its own on the very nearest spur was the Laughing Gull. It was ridiculous close: no more than 10m away and looking perfectly happy. I immediately got down to taking some photos and video. 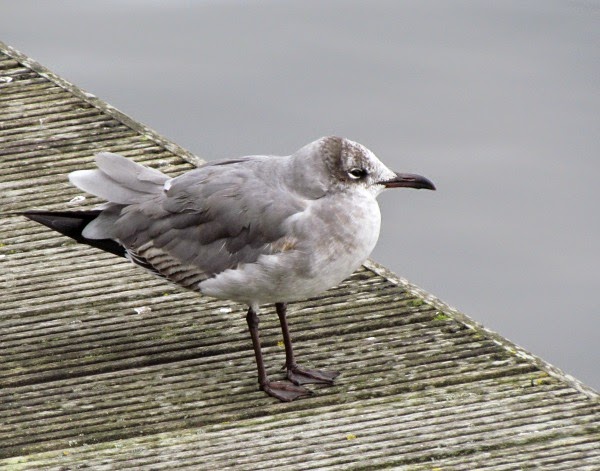 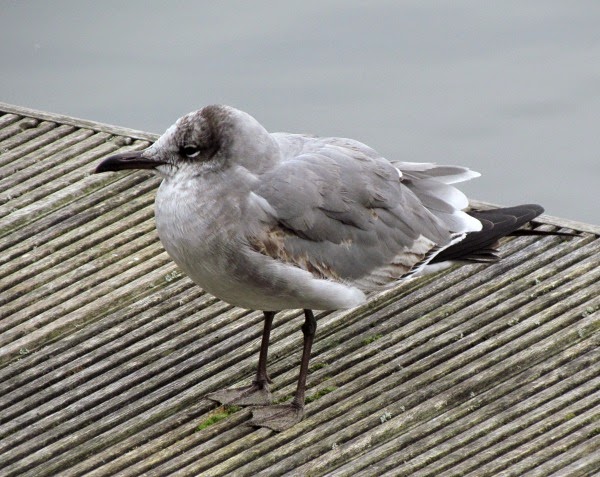 Shortly after that a birder came up carrying a big loaf of bread. He lobbed a few pieces at the Laughing Gull which immediately set upon it with gusto. However this activity attracted the flock of Black-headed Gulls which were loafing out in the middle of the lake and there was soon a maelstrom of wings as they all descended. This proved too much for the American visitor which flew off out of sight. Somewhat peeved by the needless behaviour of the other birder (who slunk off sheepishly) I decided to get myself a coffee from a neighbouring café and to check in back home with my VLW as our TV aerial had come down and she was trying to get it sorted. Ten minutes later with coffee in hand and news of good progress on the aerial front I was back at the Marine Lake.


There was still no sign of the bird so I decided to wander over to the beach by the lighthouse where it had sometimes been reported over the last few days. Here there were a couple of Oystercatchers and a few loafing gulls but no sign of the bird in question so I returned to the pontoon to finish my coffee. Whilst there I got chatting to another birder who said that he'd seen the bird flying around a couple of times and sure enough soon after it flew over and appeared to land back where I'd parked the car where someone was busy feeding the pigeons. I wandered back over there and was treated to some great flyovers before it departed again so I ambled back to the pontoon. Here I got chatting to some locals who told me about some Snow Bunting on the beach a short distance away. They were a bit vague about where exactly it was but apparently I had to walk along the sea front away from New Brighton in the direction that I'd driven in. As the Laughing Gull was currently absent I started to head off but as the tide was now right in I couldn't see any obvious spots where to see them. After a good ten minutes of brisk walking I came to some groynes and had a bit of a look around but again there wasn't anywhere obvious and I started to wonder whether they'd meant all the way back where the main road turns inland. This was a fair way beyond where I was so in the end I turned around and walked back to the Marine Lake. 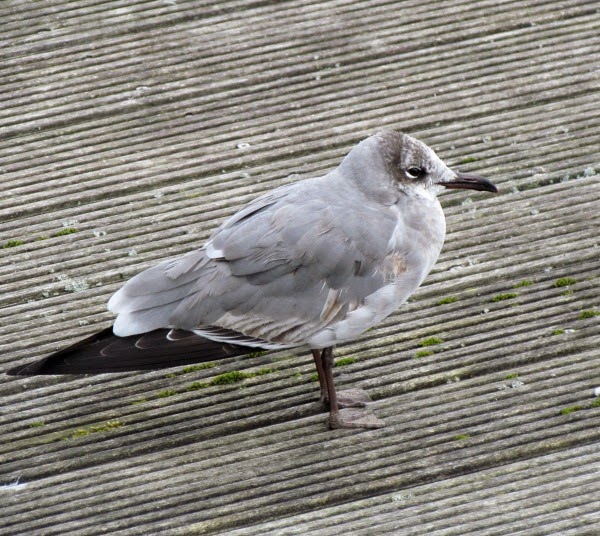 Here I found the Laughing Gull back in residence and I took some more photos before it went off for a fly-around again. By now it was getting on for lunch time so I went back to the car and got my lunch out and headed back to the Pontoon. The bird was back again but on the middle spur now and there were some new visitors in trying to take photos of it. As it was relatively distant now at some 25m away I thought that I'd encourage it closer and carefully dropped one piece of sandwich crust on the pontoon right in front of me. No sooner had I done this than the Laughing Gull came a flew right down in front of me again. However it didn't seem to like the brown bread crust that I'd offered and pecked at it a few times before leaving it. The Turnstones didn't seem so fussy though and soon came and ate it up. The new photographers were suitably grateful to be able to snap the bird from such close quarters though.

Rather than taking more photos myself I just watched the Gull as I ate my sandwiches and started to appreciate it in all its subtlety. It was interesting to compare it with the Franklin's Gull that I'd seen last autumn. Whilst they were superficially similar, the Franklin's was a very compact bird with short stubby bill and modest wings and neat white apical marks and a neat hood. This bird on the other hand was expansive: it had a long bill and a lovely long primary projection on jet black primaries. The dark grey of the mantle extended up it's nape to the start of the rather scruffy hood. It had lovely deep dark red legs and bill and a striking black terminal band on it's clean white tail. In flight its long wings gave it an almost falcon-like jizz to it. All in all a very attractive bird.


Time was marching on now but whilst chatting to one of the latest visitors to come and pay homage to this bird I finally got some decent gen on the Snow Buntings which were indeed at the beach where the road turned inland. I decided to pop in there before heading back home and set off on the five minute drive to this other beach. This turned out to be a larger beach with lots of washed up shells and seaweed and looked rather good for Snow Buntings. I walked along the obvious high tide line looking carefully but couldn't see anything. There were about a dozen Common Gulls just offshore together with one Redshank that was wading in the shallows there. At the far end of the beach were a flock of nine Sanderling, always a very attractive wader. 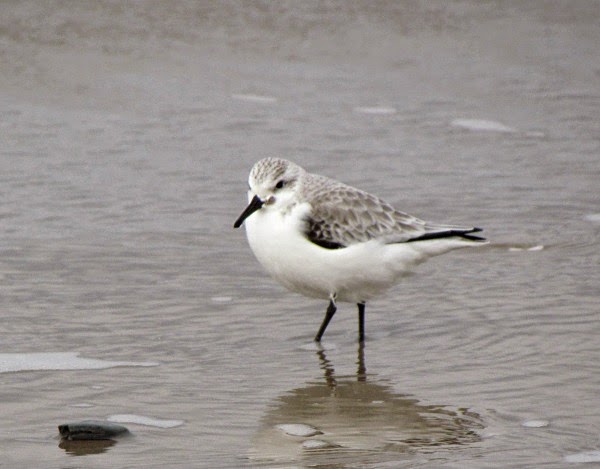 I started to work my way back along the beach and soon spotted some of the birders from the Marine Lake out looking for the Buntings as well. Fortunately they soon found them, right at the top of the beach near the road, well away from where I'd been looking. It was nice to catch up with this charming species after having missed them on my last Durham trip. I busied myself taking some snaps though the light wasn't particularly good now. 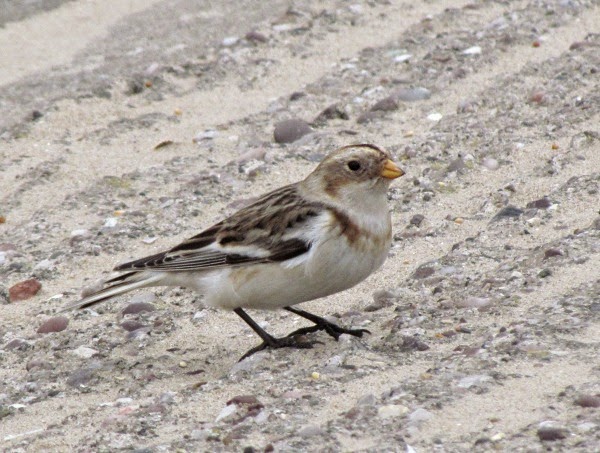 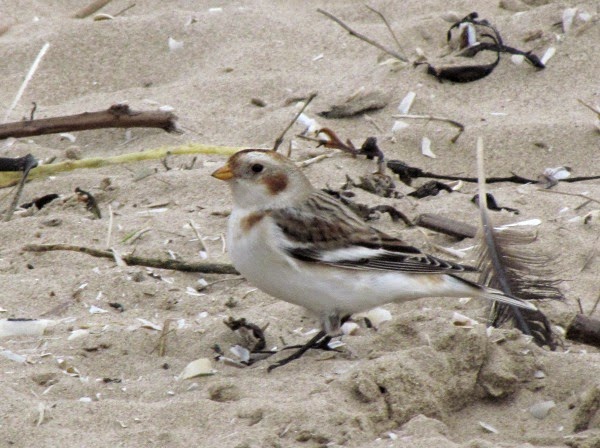 It was a nice finale to my birding trip but after a while I decided that it was time to head back to the Gnome mobile and home. The journey back was uneventful though of course the M6 was very busy in places. Still the traffic kept going, there were some interesting programmes on Radio 4 to keep me occupied and anyway I had that inner glow of contentment from my successful twitch. I arrived back into the bosom of my family at around 5pm for a celebratory cup of tea and a chat with my VLW. It had been a good day out.
Posted by Adam Hartley (Gnome) at 12:47