Readers may recall that on my last outing to see the Laughing Gull, I was torn between that bird and the pair of Serins at Shoeburyness though in the end the Gull won out easily enough. Amazingly though the Serins had continued to stick around so when I found myself with a free Monday (which is generally the worst day for the forex markets so the day I prefer to take off) I thought that it would be rude not to go and take a look, after all they were within my two hour guide line travel time. Thus it was that at about 8am I set off from Oxford into the maelstrom of commuter traffic and threaded my way around the northern half of the M25 before heading down the A127 towards deepest darkest Essex. I was relying on my "trusty" Sat Nav app which stupidly decided that rather than go on the by-pass I needed to see the centre of Southend and Leigh so I arrived some fifteen minutes later than I should have done at about 10:15 a.m.. Still  the "still present" text had come through on RBA and so it was in a confident frame of mind that I parked up at Gunner's Park at Shoeburyness, tooled up and hurried over to the pond area where they were know to hang out.


There I met four other birders all loitering in the same area: two ladies and two gents. The ladies informed me that they'd met the person who'd put out the message and that the birds had last been seen about 9 a.m. some thirty minutes before they'd arrived and that neither they nor the other birders had themselves seen them yet. I therefore settled down to wait. Given that it was blowing a gale, we all elected to stand in the relative shelter of the lee of the clump of trees and bushes next to the pond by the car park that was mentioned in just about every RBA text that reported the birds. We figured that the birds too would want to shelter on that side of the trees and that indeed had been where the initial observer had seen them. I must admit that I really don't like birding in the wind, especially for small passerines - it's just such hard work that I generally feel that it's not worth it. Indeed I wouldn't have come this morning with such a forecast except that it had been nearly as windy the previous day and yet the birds had been reported regularly throughout the day. So fingers crossed and I knew that the birds were still about so I should be OK.


There were plenty of small birds to check through with modest numbers of Goldfinches and Greenfinches, Dunnocks, Robins and Tits. There was also a very confiding Stonechat (which I tried to photograph but the autofocus managed to miss it completely) as well as a Little Egret and a Redshank along the pond margins to keep us entertained whilst we waited. Initially we were all keen and stayed faithful to the pond area but as time passed we all started to get restless and to wander off looking in other areas. I'd read that the birds were sometimes seen over the other side of the park by the estuary so I periodically wandered over there to take a look. When the tide was out the mud was covered with a hundreds of waders, mostly Oystercatchers and Redshank, with a few Sanderling, Turnstones and Curlew. There was plenty of nice looking scrubby habitat in the area and a small copse of pines but in the wind any hunkered down Serin would sadly go unnoticed. I returned at regular intervals to check on updates from the pond area but no one saw anything.


Gradually the other birders gave up and left until eventually it was just me left on my own. I decided to go for a final wander over to the other side where I found a great bit of sheltered habitat right along the estuary shoreline on the side of the cliff. There was no wind there and plenty of suitable looking weeds. Indeed I flushed a couple of birds there almost immediately though they were just Goldfinches. I searched as much as I could though time had run out for me now. I'd originally planned to be back home mid afternoon at it was after 3pm already.


Finally I had to admit defeat and trudged dejectedly back to the car and headed for home. To add insult to injury there was a huge jam on the M40 just at the Oxford turn-off and it took over an hour to get from the motorway into the city itself so in the end I was back too late to take our younger daughter to her Tae Kwan Do class about which I felt rather guilty.


So all in all a depressing failure. Sure I'd seen some nice scenery and had managed to year tick Brent Goose on the estuary itself but, being a family man with commitments, my time that I could go off on one of my birding jaunts was relatively scarce and therefore rather precious and so it really felt like a wasted opportunity to dip. Still that is part of birding of course and I tried to philosophical about it all though the truth was that the cold fog of dippage hung like a cloud over me for days.


Naturally enough the birds were still about and the rest of the week I had to endure the daily reports on RBA of the two Serins in the same location. I had no intention of contemplating a second attempt at these birds. For starters I couldn't really afford to take another whole day off especially as I was due to head up north once more to fetch Daughter 1 back down from Durham at the end of the week. However, I noticed that first thing in the morning seemed to be the most consistent time that the Serins were reported. This got me thinking and eventually I came up with a plan to head back to Essex on Sunday evening for a dawn raid on Gunner's Park which would mean that I would be back at my desk late morning and able to get some work done. So this is what I did.

Sunday afternoon I booked a room on Air B&B in Southend, about 5 minutes away from Gunner's Park and at 8pm after our son L had been put to bed I said goodbye to my VLW and set off in the Gnome mobile into the evening traffic. Whilst the M40 was a bit busy the M25 and A127 were fine and I arrived as expected two hours later at a pleasant enough B&B in a quiet residential area in Southend. There I had a cup of tea and a chat with my hosts before heading to bed, setting the alarm for about 6:15 a.m. the next morning. In actuality I awoke earlier than this so passed the time reading on my Kindle until it was time to get up, shower and then set off. All the birds were already singing as I left the house on what turned out to be a clear but rather crisp morning though mercifully almost completely windless. In fact I'd checked the weather carefully before hatching this plan - had it been a windy forecast again I wouldn't have bothered coming at all. Some five minutes later I arrived at the Park only to find that that car park was still locked (it turned out that it didn't open until 8 a.m.) so I parked up on the main road, tooled up and headed back to the familiar area of the vicinity of the car park pond.

The sun was just rising over the new estate buildings as I arrived and there was plenty of bird activity though it was the usual species that I remembered from last time. I was lucky enough to spot a Water Rail skulking around by the pond though of course it scurried back to the reeds in the centre of the pond when it saw me. There was no sign of any Serins to start with and to keep warm until the sun came up I kept on the move looking in all the bushes and scrub near the pond. A Song Thrush was singing loudly from the tree tops by the pond and there were a few Goldfinches and Greenfinches as before though no sign of the Stonechat. I kept up my efforts for about three quarters of an hour and was just starting to flag and even to start contemplating the prospect of a horrendous double-dip when I spotted something promising in one of the trees next to the pond. Bingo! There was a Serin in all its loveliness. Unfortunately it didn't stay in position for very long but soon flew off. Still, mission accomplished and I could relax. The sun was out now, there was hardly a breath of wind and it was lovely and warm as I went to get the car from the main road and park it in the now-open car park and then returned to the pond.

Shortly afterwards the Serin came back and I managed a bit of video footage of it though its face was in shadow so it wasn't great. After that the views were fairly regular: it seemed to follow a pattern of sitting in the tree for a bit and then flying down into the scrub behind where I was standing where it would miraculously disappear, blending in with the background so only its small mouse-like movements betrayed its presence. When disturbed it would end up back in the trees again. Eventually I was able to get some decent photos and video of the bird in the trees in full sunshine. It was such a relief to have great and prolonged views of this bird that had been so elusive last time round. 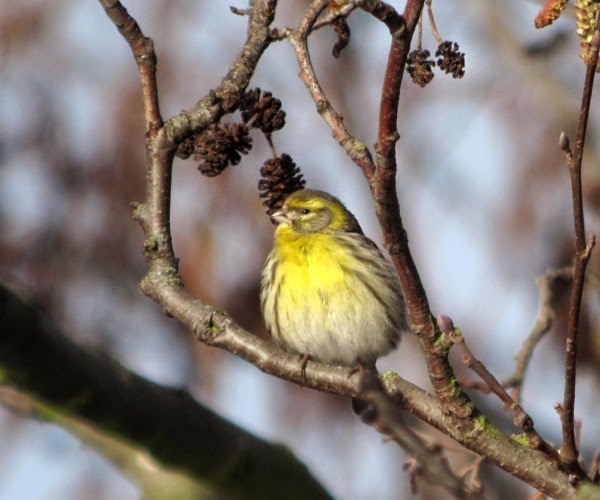 At just before 9 a.m. I decided that I'd had my fill and wandered back to the Gnome mobile and headed for home. Fortunately there was some interesting programmes on Radio 4 to keep me occupied and the journey back was uneventful. It was a bit of a shock to the system when I got out of the car in Oxford: the lovely warm sunshine that I'd enjoyed in Essex had been replaced by low grey cloud and a chilly wind. Still I didn't mind, I was able to bask in the warm glow of a revenge tick and finally able to lay to rest the ghost of the dip of this species at Rainham all the way back in January 2010.

I would like to recommend that you pick the most recommended Forex broker.