A Tale of Two Ducks

This is a tale of two ducks (or more accurately five ducks!). One was to alleviate some patch boredom and one was a full-on Code Red scramble for a county tick.

Duck 1
I was getting bored on my Patch. Whilst there had been a trickle of migrants now passing through I'd personally yet to see any apart from a couple of Little Ringed Plovers. Each day I would dutifully visit the Meadow floods in order to count the number of Shelduck that were about today (it varied between 4 and 12), check that the two Oystercatchers were still there (they usually were) and to see how many Redshank were about today (betwen 3 and 7 usually). This is the nature of patch birding of course but too much saminess can be bad for the soul.

To inject a bit of variety last Friday I decided to pay my respects to the long-staying female Long-tailed Duck that had been loitering in the county for some time. It was initially located at Dorchester but had recently moved to Cassington GP's just up the road from me. So to make a change from my Port Meadow patch duties I decided instead to go and look for it. I parked up in Yarton near the church and ambled down the bridleway looking out for early spring flowers as I went. The weather was rainy and windy so I'd donned my full waterproof gear to protect me from the elements.

In less than ten minutes I was at the appropriate pit though there was no obvious viewing point. I found a gap in the hedge and a quick scan with the bins soon located it on the far side in front of an island. I tried some video footage but the wind and the distance made for poor shooting conditions. It was spending a lot of time asleep though did wake up briefly for a preen.

After a while it decided to slope off elsewhere and I decided to return home for a cup of tea. Still it had been a nice little diversion to see what is already my third Long-tailed Duck for the county though they are always nice birds to see.

One week on and I'd only been thinking the previous day (as I was trudging around Port Meadow in the rain) that it was about time that I had a county "Code Red Scramble" again - that moment of great excitement when something good turns up in the county and it's all systems go to try and see it. In my day dream I was going through what birds at this time of year (still rather early in the spring season) might in reality actually be plausible and I came up with Ring-necked Duck as a possibility - April was after all a good time for this species. The last record in the county had been in April five years ago when an elusive drake turned up on Otmoor one evening (there was also a record of one on the Thames at Iffley the following winter but no one seems to know much about that one). Anyway, this was still a species that I needed for my paltry county list and I certainly wouldn't say "no" should one turn up.


Amazingly I had less than twelve hours to wait before I was rudely woken up by a text coming through at 7 a.m. on Saturday morning. Now normally I have my mobile switched off at night but I'd forgotten to switch it off before going to bed. I had been meaning to have a lie in: it had been a hard week of work coupled with the fact that the rest of the family were now in Easter holiday mode and were consequently going to bed later which left me stuck in the middle going to bed later and still getting up early for my work. Mumbling an apology to my VLW I fumbled for the phone to see that it was a message about four (FOUR!!??) Ring-necked Ducks at Pit 60, found by Dave Doherty though currently not in view. I got dressed and stumbled downstairs to collect my thoughts. Four was a really good record: usually they turn up as singletons and this was a good count even by national standards. Apparently there had been some multiple bird records in Ireland or on the Hebrides or somewhere at some point but for mainland Britain this was a really good record. A quick text exchange found that there was currently no sign of them so I headed back upstairs and read my book until my VLW was awake and ready for her morning tea. During this time I got a message that they'd flown off so "that was that" I thought and my VLW and I spent some time putting the world to rights whilst sipping our tea. However this domestic tranquillity was suddenly interrupted when another text came through: the birds were back and on view from the hide at Pit 60. Time to scramble the Gnome Mobile! I suggested to my (less than pleased) VLW that I'd do the morning shopping on the way back and I hurried off to get my gear together and to fire up the Volvo.


Pit 60 was about twenty minutes away as the Gnome Mobile flies. From past experience I knew that parking at the top of the lane left a long old slog so I decided to risk going down the lane where there was a spot for a couple of cars half way down. Fortunately one slot was still free and I parked up and hurried down to the hide. As I approached the hide door I mused that this moment when I opened the hide door was like the famous Schroedinger's Cat thought experiment of quantum mechanics: suddenly the unknown status of the birds (were they still there or not?) would collapse into a single known outcome when I took a look. OK, so I'm a real science nerd (I do have a doctorate in theoretical atomic physics after all) and that theory is not applicable in this case anyway (for reasons I won't bore you with) but still it was with nervous excitement that I opened the door to find several of Oxford's finest all sitting there in a relaxed frame of mind and calmly watching the birds. Relief flooded over me and I got down to the business of seeing the birds for myself (tick!) and then taking some photos and video. 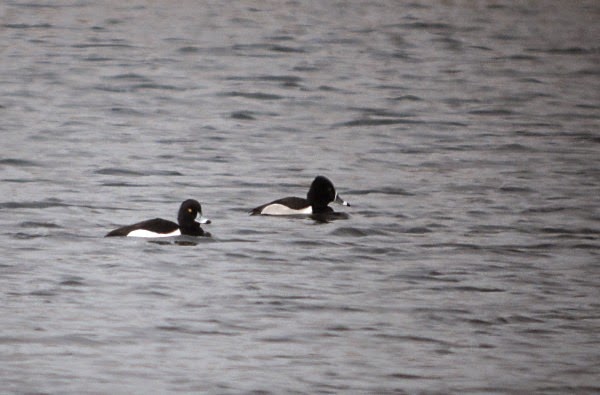 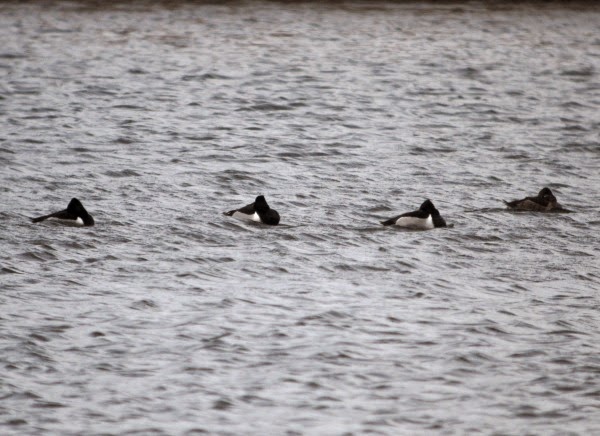 There were indeed three smart drakes and a female all looking splendid in their spring finery and all actively diving and looking happy. However, in order to try and limit my haemorrhaging Brownie Points I knew that I didn't have long to stay so got on with taking my photos and video. They were rather distant though the light was good and there was no wind so the process was relatively straight-forward. I chatted briefly with the birders there (Mark Chivers, Terry Sherlock and Ewan Urquhart) and then as other birders started to arrive I said my farewells and started to head back towards the car, calling my VLW as I did so to ask here to text me the shopping list. I did take a bit more time as I went back and stopped to admire the Violets that were now coming out everywhere. A Blackcap was warbling from the hedgerows and Chiffchaffs were singing: spring was springing and I was a contented bunny as I headed back to the Gnome mobile and then back to Oxford to do the weekly shop.

In speculating about the origins of these birds Ian Lewington had in a radio interview on BBC Radio Oxford suggested that they may have come over last autumn and over-wintered in Spain or Morocco and were now making their way north again - in other words doing their usual north-south migration but on the wrong side of the Atlantic. Anyway, wherever they were from it had been great to see such smart birds and in such a good number. What's more, whilst it had certainly been a bit of a Blitzkrieg Twitch it had injected a welcome bit of excitement and variety into my dull patch birding life. Moreover, I had a shiny new county tick to cherish. The first of many this year I hope though it's going to be a hard push to match the six that I had last year. I wonder what will turn up next.