Hooded Merganser has a rather uncertain status in UK listing. It is of course the age old problem with water fowl of determining their provenance - so many collections have them that there are the inevitable escapes and just how do you tell the genuine vagrant from the escapee? It is now generally considered that the following points need to be looked for

1. It appears at the right time of year when wild birds might well be on the move, perhaps in the company of other wild duck that have moved in
2. It is unringed and the feathers aren't clipped or damaged
3. It is wild and wary of people
4. It departs in good time to continue it's migration


As far as Hooded Merganser is concerned, I saw the then first winter drake at Radipole which has decided to take up residence there and has subsequently been declared an escapee by a committee of wise birders. Now I think that this decision may be a little harsh. After all it was first seen to fly in off the sea and collapse exhausted in a storm drain before relocating to Radipole. There it soon learnt to copy the behaviour of all the Tufted Duck there and ignore the many passers by and even take a bit of bread now and then. I must admit that I've always thought that the so-called bread test was a bit of a joke. Does this mean that all the Mallards on my local canal are all escapees because they come to bread. Of course not! Birds, tend to take their cues from others around them and it's quite understandable that a completely lost young bird who's navigation system is clearly up the spout (since it got lost in the first place) might decide to stay and enjoy what's clearly a rather easy life for a duck there. So, as far as I was concerned, Hooded Merganser was on my list. Now, I understand that if you want to start comparing lists with other people then you need some kind of committee to decide what's countable but as I list purely for my own pleasure I'm free to make up my own mind and I was happy enough with it. Or was I?


The acid test is of course if another bird turns up nearby and is easily twitchable - if I were completely at ease with my tick then I wouldn't feel the need to go and see any other birds of this species. Yet when a female Hooded Merganser turned up not a million miles away in Wiltshire I was indeed tempted. It seemed to pass the first three points on the list above and as it was a quiet time of year with not much to see I hadn't been on a Gnome outing for some time now. Why not pay it a visit as a bit of an insurance tick? I decided to give it a go.


I was working on Thursday morning but would be free of commitments by around 2 p.m. and as the bird was just over an hour away I should be able to get there in good time to see it. Reports on RBA were remarkably thin on the ground and with only one "still there" first thing that morning I put out an RFI and was soon rewarded with good news. So at 2 p.m. I set off in the Gnome mobile along the familiar A420 that I usually use when heading to the South West. The traffic rather ground to crawl towards the end and it turned out to be a minor prang which took time to get past and rather added to my journey time so it wasn't until around 3:30 p.m. that I arrived at the car park opposite the park entrance and tooled up. The car park was remarkably empty and there was just one returning birder as I got ready who reported that the bird was showing well albeit rather distantly. I yomped off into the park where I could see the lake ahead of me and just two people standing on the bank with a scope.

I headed over to these two and enquired about the bird as it was not obviously in sight. They informed me that it had climbed out onto the bank "by the green plastic bag" and had just a minute ago ducked out of sight. Of course all twitchers know all to well the old "just gone out of sight" syndrome where it never appears again so I started to feel a bit worried about the whole situation - I'd assumed that this was going to be "a walk up to the lake and tick it" situation. Whilst I set up my scope to take a look the other two decided to leave and I could hear them muttering something about "going to roost now" as they departed. Whilst it seemed rather early for roosting the fact was it was rather grey and cloudy, in fact distinctly gloomy and if the bird had enjoyed a full day's feeding it might well be starting to considered settling down for the night. Mentally I was kicking myself for having decided to visit so late.


I got out my scope and tried to scope the "green bag" area on the far bank. There was a clear area by the bag under some trees but no obvious sign of the bird at all. I looked all around the lake, there were a few Goosander dotted about the place, the odd Mallard and Moorhen and a modest roost of Black-headed Gulls out in the centre but that was about it. The trouble was that the area on the far bank was at a bit of an angle so I walked along the bank looking for a break in the trees and reeds where I could get a better view. I found a spot and set the scope zoom to the maximum. "Was that the bird tucked up on the ground there with its head under its wing?". I couldn't really make it out - I thought that I saw it move for a moment but in the poor light I wasn't sure.  It was all very frustrating. What to do? There was no one else here apart from a few dog walkers and a heavy despondency started to settle over me.


A dog walker came by and asked if there was anything interesting about so I explained about the bird. As she seemed to be local I then asked whether it was possible to get around the other side of the lake. She explained that there was a gate there and a footpath which headed off into the woods but one wasn't really supposed to head over to the lake. She then said that she sometimes walks that area and as there were no sheep in the field at present it would probably be OK. Hmm, I decided to risk it. I walked as best I could over the rather muddy and slippery grass, through the gate and along the north side of the lake. However, despite having a good look around in the general area for quite some time I couldn't see any sign of the bird. Dejected at having dipped by all of one minute I once again berated myself for having been so stupid in visiting so late in the day and started to trudge with a heavy heart back the way I came. As I was walking back I cast an idle eye over the birds still on the water. "What was that unfamiliar shape and colour next to that Mallard there?" I raised my bins and Bingo there it was! I couldn't quite believe it but it was swimming around some thirty yards away. Relieved I started taking photos with my new super zoom though the light was terrible and the bird clearly had roosting on its mind as it kept tucking its head up. It was quite a striking thing though with it's large hood and bright red eye giving it a somewhat alien reptilian appearance. 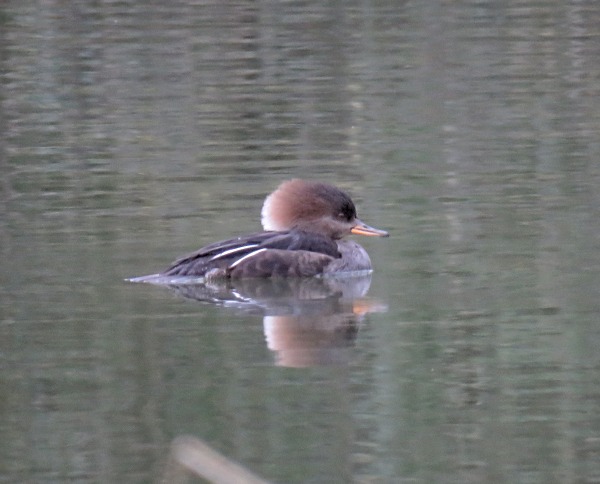 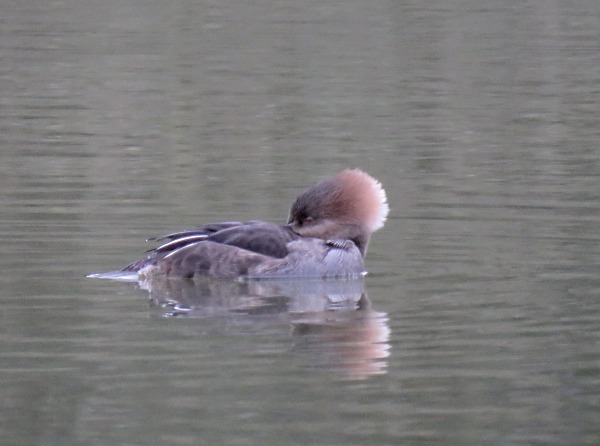 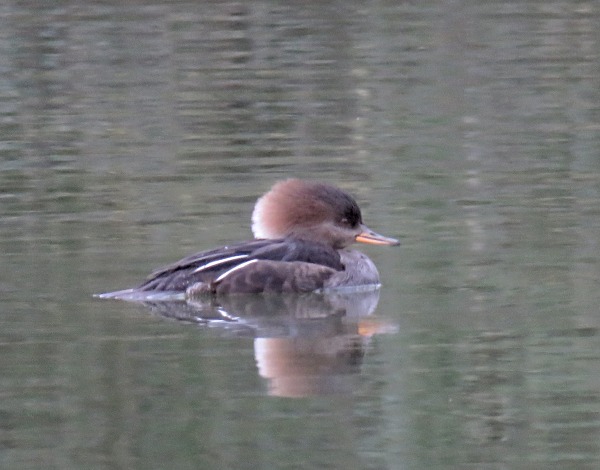 As I'd spent so long not seeing the bird I didn't have a great deal of time so once it tucked its head down again I decided that I needed to head back. After all I'd promised my VLW that I'd be back for dinner and there'd be rush hour traffic to contend with. I therefore yomped back to the car and fired up the Gnome mobile. There was indeed a fair amount of traffic but fortunately it seemed mostly to be going the other way and it didn't take any longer that usual for the return journey. Not that I minded as I had somehow snatched success from the jaws of horrendous dippage. With an insurance tick under my belt I could now hold my head high and claim to have Hooded Merganser on my list without suffering the scorn that the Radipole bird tends to attract from some birders.

As you say what goes on your own list is a personal choice and definitely agree about ducks and bread. Strange that isn't an issue when gulls do it but it is when ducks do. Anyway glad you enjoyed your trip into darkest Wiltshire.

Hi Malcolm, the bread test is a bit ridiculous really. It was nice to get down to that part of the country again - I was last there for the Red-flanked Bluetail a few years ago.

I have yet to have the pleasure of seeing the Hooded Merganser up close and personal, as it were. I have only seen pictures in magazines and of course on the telly. If I may be so bold, do you think you will ever have guided escorted tours to witness this fine specimen in the wild?