New Forest Frolics - the Sublime and the Tortuous

In my last post I was banging on about not seeing Scarce Blue-tailed Damselflies. Since then I'd been thinking that perhaps I ought to make the effort to go and see them properly at a site where they can reliably seen. To this end I started browsing and making enquiries and managed to get some reasonably good gen on a site in the New Forest for them. I was putting the finishing touches to my plans when Peter Law got in touch saying that he'd in fact been to see them at the weekend there and would be happy to go again as a guide. This seemed like a reasonable plan so despite the fact that we would be out in some remote heathland on what was forecast to be about the hottest day of the year, we decided to go ahead and so it was that at 8:30 a.m. I picked Peter up from the Redbridge Park and Ride at the southern end of Oxford and we headed off south down the A34.

The journey itself was uneventful and we eventually pulled up in a small car park on the edge of a large expanse of heathland next to a small stream. Given the hot sunny conditions, I smothered myself in sun cream and made sure I was well covered up whereas Peter went for a more light-weight clothing option. We set off along the banks of the stream, soon spotting our first Golden-ringed Dragonfly and a Broad-bodied Chaser. Beautiful Demoiselle flitted along the banks and the odd small trout would scurry away up the shallow stream as we approached. After some twenty minutes or so of walking we crossed the stream and soon found a boggy flush with a small stream running through it. There was lots of Marsh St. John's Wort growing as well as Round-leaved Crowsfoot, Bog Pondweed, Water Purslane and Water Starwort. Almost immediately we spotted a male Damselfly which did indeed turn out to be a Scarce Blue-tailed - result! The diagnostic blue tail pattern was in marked contrast to that of a Common Blue-tailed and in the flesh they were easy to tell apart. We set about taking some pictures though I had to discard a load of them until I finally thoroughly checked by camera settings and realised that they were completely wrong. Eventually things were working properly and I was able to get some shots. 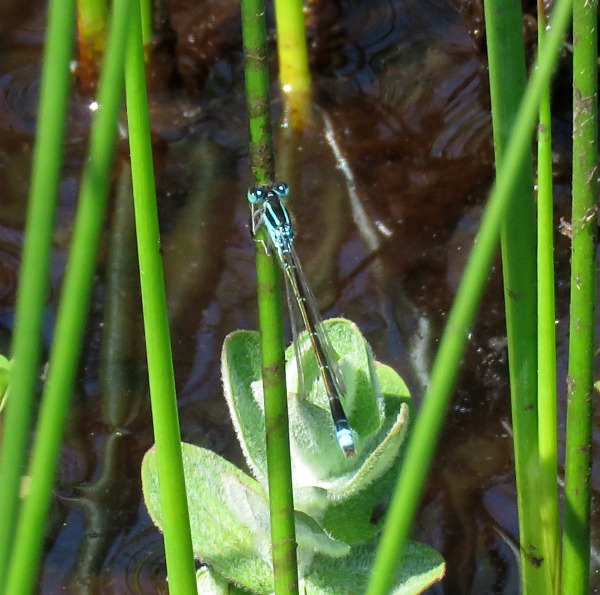 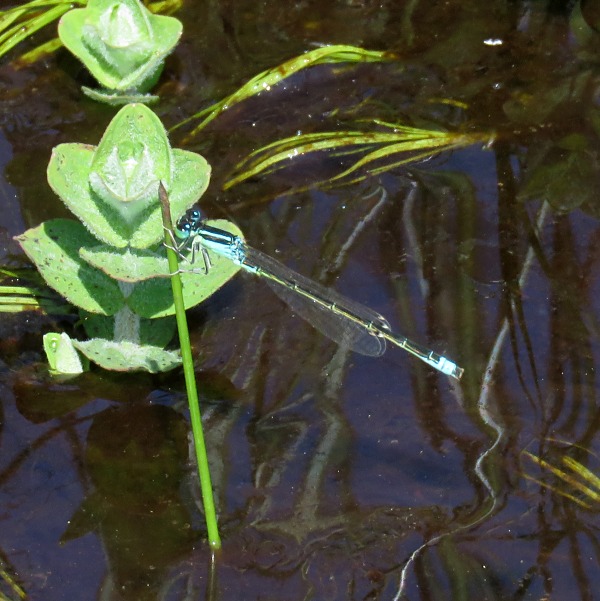 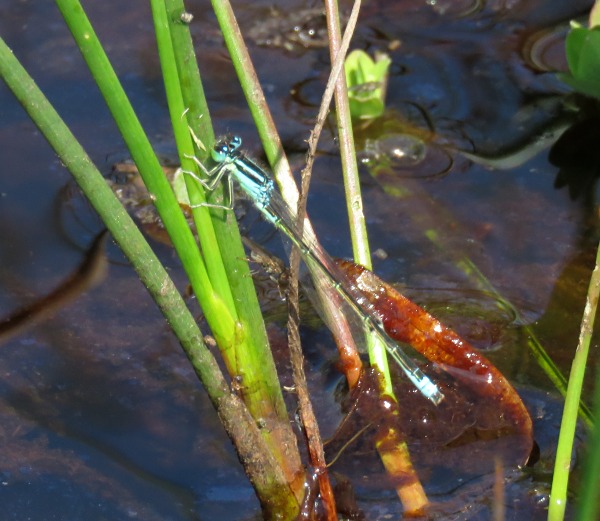 Having been there a few days previously, Peter was soon content and sat down in the sun to wait for me to finish. I had a good explore all around the bog and managed to turn up quite a few Keeled Skimmers and some Small Red Damsels as well as a couple of Common Darters but surprisingly, apart from the one area where we'd started off, I couldn't find any more Scarce Blue-tails at all. No matter, we'd seen what we'd come for and seen it well. Time to move on. 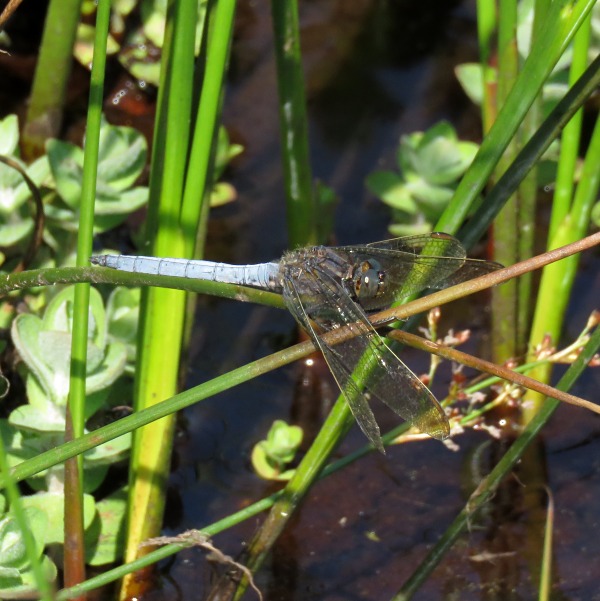 The second part of the plan was more speculative. Over at the other end of this large heathland area there was a known hot spot for Common (or more accurately Moorland) Hawker. Peter had visited the area previously and we thought that we'd try to find the area again. Normally Peter comes in from the other direction so we were hoping that we'd be able to find the area which consisted of some rather small now-flooded old bomb craters (from days when they used to carry out munitions testing on the heath). The obvious way to get there was to head along the stream and then pick up one of the main pathways there but we in our foolishness (I think that it was largely my idea) decided to head across country instead. This turned out to be a long and very tortuous slog through lots of bog. There were some compensations in that we saw lots of Silver-studded Blues and at one point when we were crossing a stream Peter thought that he saw a female Common Hawker fly past though he later decided that it might have been a Golden-ringed. Eventually we made it on to the main path and from then on our progress was a lot quicker. We heard a Tree Pipit and saw a pair of Wood Lark as we slogged our way on in the heat but apart from that it was rather quiet.


Eventually we descended into a wood and finally came to a place where a stream crossed the path. At this point we turned off and followed the stream until we came to a large boggy expanse. This was supposed to be the area we were looking for but the trouble was that Peter didn't recognise it at all. We floundered around in the bog and eventually located one large bomb crater pond that was occupied by a male Emperor that saw off any interlopers very quickly. One or two other large dragonflies did try to access the pond but were chased off so quickly that it was impossible to see what they actually were. In the end Peter headed off to the shade of some trees to have his packed lunch and eventually I joined him. We were both rather disconsolate at having slogged our way across difficult terrain for a good couple of hours only not to find the correct location. I got out my iPhone and checked some recent e-mails where I'd asked someone for advice on where to go in this area. It turned out that according to this other person's advice we should be a bit further north. We decided to head over in that direction to see if we could find an area that Peter would recognise.

The journey was fairly straight-forward until we came to a very boggy stream area which we needed to traverse. It took quite a bit of trial and error before we were able to find a way across and there was a fair bit of cursing and nearly falling over on both our parts. Eventually we made it over and Peter thought that this new area looked more promising. We headed around some trees looking out carefully for these mythical craters but all to no avail. When we found ourselves back at the start of a boggy area Peter decided that he really didn't know where these wretched craters were and metaphorically threw his hands in the air. "Let's work our way back along this area here that we've not yet walked and if we still can't find them we'll give up" I suggested. We'd walked for no more than a couple of minutes when we came across a nice pool. What's more there were several more right next to that one. "This is it!" Peter declared - we'd at last found the bomb craters! Now that I'd seen them in the flesh I realised that from just a short distance away you couldn't tell that they were there so you really needed to know where to go or you would miss them completely as we so nearly had.


I decided to take charge of the map reading on the way back and soon navigated us back onto a main track. For speed of walking I took us along a large wide track that ran along the ridge of the whole area and it was easy going though we were both by now very tired from being out in the strength-sapping heat all day. We found a family flock of Wood Larks and spotted the occasional Golden-ringed Dragonfly but apart from that the journey was uneventful. A little over an hour later we were back at the car, both exhausted from all that slogging around in the heat. We de-tooled and I cranked the air con up to 11 as we set off, stopping for some cold drinks at the first petrol station. There was a lot of traffic on the roads now as it was the rush hour though thankfully all the jams were in the other direction and it didn't take us any longer than usual to get back to Oxford. At the Park and Ride we parted company and I headed home to Casa Gnome for a shower and then a well-deserved cup of tea.


Looking back on the trip, much of it was excellent, especially seeing Scarce Blue-tailed Damselflies so easily. There were also lots of lovely heathland and bog plants that I'd papped en passant which had been great to see. It was just a shame that the journey to locate the bomb craters had been so tortuous and so unfruitful. Peter said that it was the first time that he'd been to that site and not seen any Common Hawkers so we could only presume that perhaps it was a bit early in the season for them. Whether I could countenance another trip to the area again any time soon remains to be seen - it may have all been too much for me!