Last year the best Oxon bird of the year, a Little Bunting, arrived in the normally unproductive month of January and this year the same month has once again pulled a bit of a county Mega rabbit out of the hat in the form of a Green-winged Teal. For some reason this species seems to be rarer in Oxon than the other relatively common yank duck, namely American Wigeon. In fact there have been several of this species during the ten or so years that I've been birding in the county yet this was the first Green-winged Teal during this time. It was first found by MC on Monday last week down at Pit 60 and reported as a "probable" since a hybrid had yet to been ruled out. In fact it wasn't firmed up until last light by which time it was too late to make the trip over there. I therefore had to wait until the next day where, due to work commitments first thing I decided to wait on news and then to head off mid morning if it was still around.


Fortunately, it was still reported first thing so it was that some time after 10 a.m. I found myself hurrying down the muddy tracks towards the Langley Lane hide on Pit 60 in the company of JD. There was no one in the hide itself so we had to open up the slats and find it for ourselves. Not that it took very long and JD had it almost immediately in the extreme left hand corner from where we were looking. It was very actively moving about and indeed all the Teal were rather flighty and the flock of four Eurasian Teal that it was associating with soon moved to the middle of the pit where there was more swimming around before they all went behind some reeds. A Peregrine on a distant pylon then put them all up and down again so that they were scattered throughout the middle of the pit and we had to start the whole search again.


At this point a couple of other county birders popped in and we tried to find it for them. We managed it in the end though due to the wind direction they were unhelpfully facing directly away from us and it was hard to pin our target down from this angle. In the end the others managed at least "tickable" views before the bird disappeared into the reed bed at the far end out of sight. The other two took this as their cue to leave whilst JD and I headed to the other hide to see if we could winkle it out again. With no luck there either I decided to head off and walked back to the car a happy bunny, basking in the warm glow of a new county tick.

I wasn't able to take any decent video at all so here's some superb footage
courtesy of Badger, the Video Master


Whilst in the area I thought that it would be positively rude of me not to pop into the nearby village of Northmoor to pay homage to the resident Hawfinches in the church yard there. In the sunny conditions I managed good views of them almost immediately - far better than the brief distant views of this autumn just gone. I took a few snaps with my super-zoom camera and then headed for home. It had been a most rewarding morning's county birding. 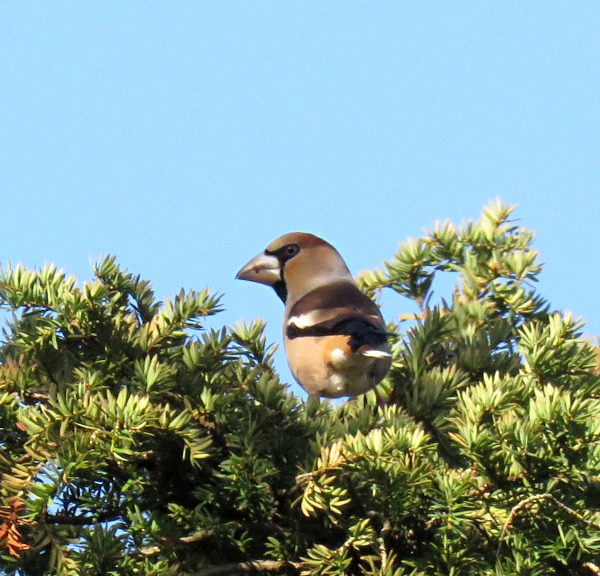 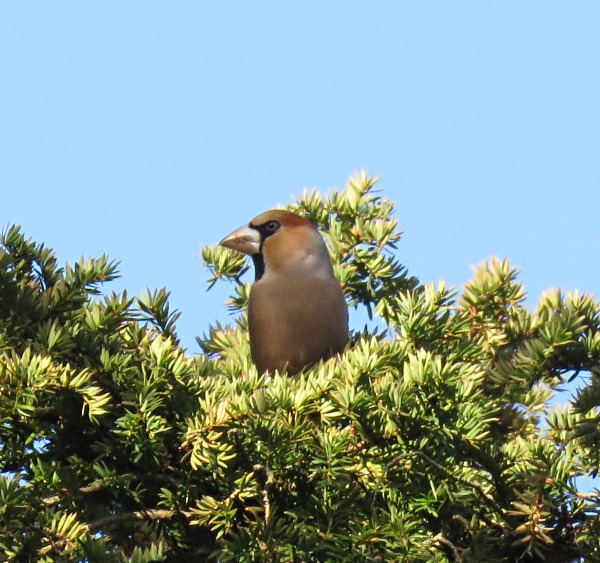 As a footnote, the Teal wasn't actually seen again after we saw it so I was actually very lucky to catch up with it in the end.
Posted by Adam Hartley (Gnome) at 21:32