About this time last year I went to pick up Daughter Number Two from Swansea University and had decided to stop off en route at Kenfig Nature Reserve to see if I could see any Fen Orchids. This rare and diminutive orchid only grows in two places: in Norfolk and in the dune slacks of south Wales at places like Kenfig. That time I'd not seen any and had presumed that I'd been a bit too late but there had also been the nagging possibility that I'd been looking in the wrong place. This year my daughter wanted to be picked up a bit earlier, in fact right in the middle of the peak season for Fen Orchids so my thoughts naturally turned to having another go. This time, to be on the safe side I got in touch with someone in the wonderful Native Orchids of the UK Facebook group to ask for directions and he kindly said that he would meet me there to show me himself. So it was that a couple of weeks ago I found myself heading west on a gloriously sunny Sunday morning towards the Severn bridge and over the River Severn into Wales. Given the hour and the day of the week there was little traffic and I made good time, indeed arriving a little early for my rendezvous with AP, my guide for the day. He turned out to be a wonderfully amiable and extremely  knowledgeable orchid enthusiast. Together with another friend of his who was doing some reconnaissance for a field trip that he was running that afternoon, we wandered along the sandy tracks towards the main dune slack enjoying the sights and scenery on a beautifully sunny day. I was pleased to note that the slack was the same one that I'd been to the previous year so at least I'd been in the right general area last time. The slack itself was awash with orchids, mostly Southern Marsh though with several Early Marsh in amongst them, including the beautiful red coccinea subspecies.

We started off not looking for Fens but instead Northern Marsh Orchid. There'd been a bit of debate in the FB group about whether NMO actually occurs at Kenfig. AP was sure that it did as he'd seen some a couple of weeks ago on his last visit but he wanted to show his friend to make sure. Eventually we found several specimens as well as some Common Twayblades. We even managed to find a hyperchromic subspecies with extremely rich colouring.

Having satisfied themselves about the NMO, the companion had to leave for his field trip so AP and I went in search of the elusive Fen Orchids. I'd been keeping half an eye out for FO as we'd tramped about the slack but hadn't spotted any. AP told me that the wardens had been getting worried about the decreasing numbers of FO over the last few years so had intervened to create some new habitat. Apparently there is a natural cycle with the dunes: a fresh sand scrape is gradually colonised and as it starts to get stabilised by grasses etc the vegetation gets thicker and there's more competition so it's harded for the more diminutive plants such as Fens to survive. So they'd dug a few fresh scrapes to create a sparsely vegetated area and this was where we were headed. As soon as we got there we could see loads of Fen Orchids. Over the relatively narrow area of the scrape there must have been at least fifty. I thanked my stars (and also of course AP) that I'd thought to ask for guidance as otherwise I'd probably never have found them in this small strip. 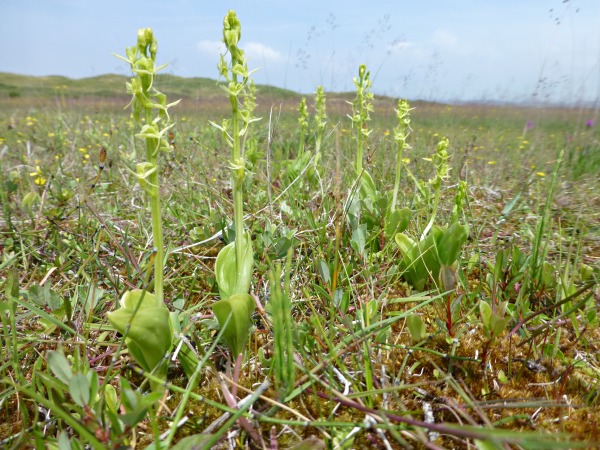 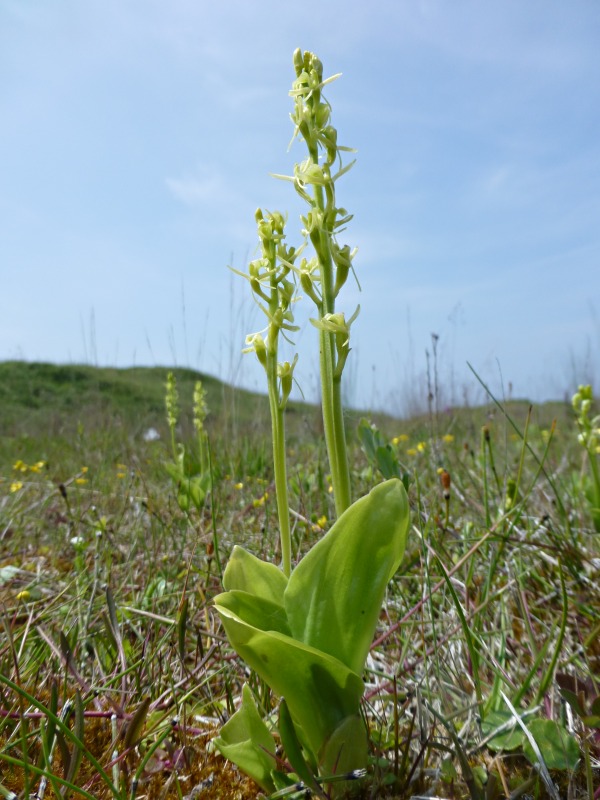 Time was marching on and I had one eye on the clock, thinking that I still had to get to Swansea, load up the car and then get all the way back home again. However, AP had mentioned in passing that right by the shoreline one could find Sea Stock, a rare coastal plant that is only to be found along the southern coast of Wales so I waited patiently until he'd finished his photography and then he took me over to see them. There were loads of dragonflies buzzing around in the pools as we went (mostly Broad-bodied Chasers) and as we neared the beach suddenly there were Pyramidal Orchids everywhere. AP soon found some Sea Stock though it was far too early for it to be in flower.

Kenfig was a wonderful place and truly one could spend all day there but as time was marching on we then turned around and headed back to the car park. I thanks my companion profusely for all the help that he'd given and we went our separate ways. I headed back onto the motorway and within half an hour I was pulling up at my daughter's student accommodation. She'd got everything already packed and ready to load in the car so it was a relatively quick turnaround and we were soon on our way back home. The return journey was uneventful and the time passed quickly enough as we caught up on each other's news. It had been a good day out and I'd finally got to see some Fen Orchids.
Posted by Adam Hartley (Gnome) at 08:41