Hang up the Bunting for the Ortolan

I've been playing a bit of a game with myself over this autumn passage season: if something comes up on the pager that I "need" and I were hypothetically to drop everything and go for it then would I have got it? The rules are simple, I allow myself 15 minutes or so from actually seeing the news to "get ready", I then allow the usual length of time to get to the location and if there is subsequently some positive news on the bird then I assume that I would have got it. This armchair twitching is a way of playing along (a bit like Fantasy League Football) when in practice I'm too busy or it's too far for me to contemplate going for a bird in real life. One of the reasons for playing this is that there are certain relatively common species which somehow still elude me and I was wanting to know if I really dedicated my autumn exclusively to birding then how many of them could I finally get? One such species on my list is Ortolan Bunting. Whilst this species is reported every autumn in reasonable numbers it's actually remarkably hard to twitch. A good proportion of the reports are fly-overs which are of course no good at all and in fact some are recorded during the night and identified by sonogram the next day. What's more, occasional birds that are actually seen on the ground seem often not to stick around and in my twitching game, despite this being a really good autumn for them, there have been a whole series of misses. In fact, there's only been one occasion where I would have connected: had I dropped everything to head off to Spurn one morning then I would have got a pair which stayed around in the stubble field north of Clubleys Field near the Warren a while ago. Since then there was a promising report of three birds in a stubble field in Sussex that I hypothetically dipped on so it was proving really hard to get this bird.


Finally on Friday something more promising turned up: a bird north of Cosham in Hampshire actually proved to be a "game tick" as it was found mid afternoon and then stuck around for the rest of the day, even "showing well". Could this actually be one of those rare Ortonlans that stick around? The next morning it was report again at first light and then again forty five minutes later. Now whilst normally I wouldn't be able to contemplate a weekend twitch, it so happened that my VLW was presently away looking after her ageing mother and would not be arriving back until later on in the day. This meant that I was left looking after our twelve year old son L with help from one of our grown-up daughters who'd not yet gone back to Uni for the autumn term. Fortunately she wasn't due in work until mid morning so it would mean that L would only on his own for a couple of hours were I to have a crack at this bird. He seemed happy about it so it was that shortly after 8 am I was in the Gnome mobile and heading off down the A34 towards the south coast.


There was no news either way on the journey until I hit the M3/M27 junction where negative news came out (present till 8 a.m. when it flew off and no further sign by 8:45 a.m.). What to do? I did seriously contemplate turning around at this point and heading back for home. However it was only another twenty minutes or so to the actual site and I felt that at the very least I'd like to see the field in which an Ortolan Bunting had been. A bit strange I know but it would be a chance to see a part of the country that I wasn't so familiar with and to stretch my legs before the slog back home. I accordingly headed on towards Portsmouth and was rewarded for this choice when no more than ten minutes later a "still present" message came up! "Wow, I might actually get to see this bird!" I thought as I quickened my pace. My turn-off came soon enough and I navigated my way through the suburbs of Cosham before the Sat Nav took me on a steep road up to the hills that tower over this area that make up the Ports Down area. Turning down a narrow road I was greeted with the familiar sights of cars parked everywhere that a car could reasonably be squeezed in. This was clearly the spot! I added my car to the collection, got tooled up and hurried down the hill to a bend in the road where there was a gathering of about thirty or so birders all standing in the corner of a field. A quick enquiry revealed that the bird had last been seen about fifteen minutes ago before flying down into the stubble in the field in which we stood though in the long grass and stubble it was completely hidden from view. At the very least we ought to see it fly out I thought though I have seen birds do disappearing acts in situations like this before so nothing was certain. I found a position in the twitch line and waited.


More people arrived and joined the throng, all intently watching the field and the favoured Hawthorn bush in the corner where it liked to perch. PL from Oxon arrived shortly after me - to be honest I'd been half expecting him as he and I have similar twitch distance limits and are not a million miles apart in terms of what we still need to see. We chatted away quietly as we waited.

Gradually I started to get impatient and not a little bit worried. It had been getting on for three quarters of an hour now with no luck. A very distant Bunting had appears on some telegraph wires in the next field which had got some members of the crowd rather excited and in the haze and because of the distance it wasn't so easy to see what it was. I could tell that it wasn't an Ortolan as it had a noticeable supercilium and eventually the consensus was reached that it was a female Reed Bunting. A few Chiffies were flicking around in the hedgerows, Wood Pigeons and the occasional Stock Dove were flying over and a Sparrowhawk quartered over the fields before disappearing. Eventually a young man made his way down the twitch line asking if people might mind if a bijou flushette were organised as it had been getting on for an hour now. Of course no one minded as we all wanted to see the bird. So a party of a few birders headed off around to the far hedge and slowly and gradually worked their way down towards the area where the bird was seen. "This was where we discover that the bird has done a disappearing act" I worried, but I needn't have done as soon after a shout went up as the bird flew back up into its favourite bush. Here it sat contentedly enough having a good preen and giving really great views to the assembled crowd. I clicked away with my digiscoping gear though conditions were rather hazy and very contrasty so it wasn't that easy. 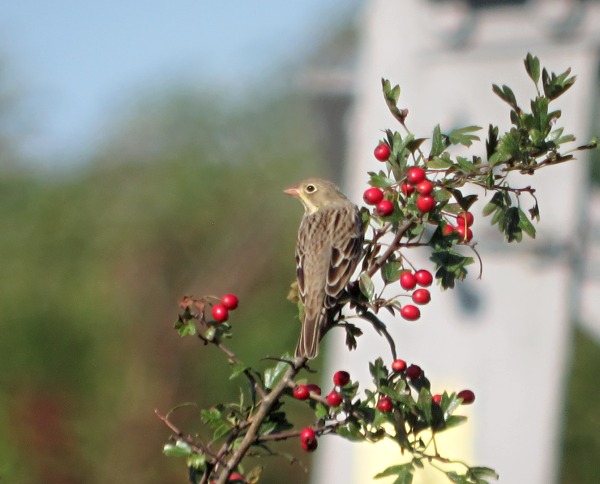 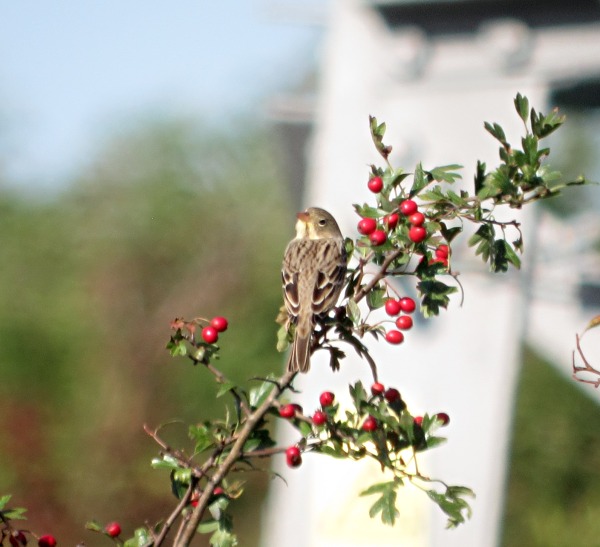 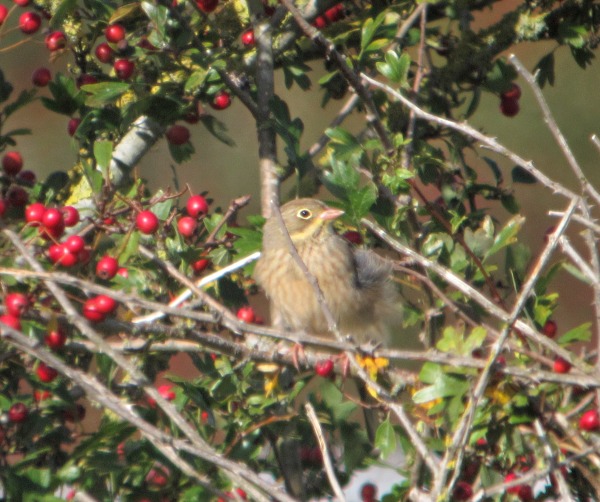 The bird sat happily enough for quite some time and with my son in mind, I decided that I'd had my fill and chose to head off back home. According to PL a little while later it flew back down into the field so was none the worse for being nudged up into the tree. Meanwhile I headed back though the traffic, which had been light on the way down, had got a lot worse with a jam where the two M27's merged with the M3 and another one near Newbury thanks to a county show. What's more getting into Oxford was the usual nightmare that it is on a Saturday so the whole return journey took forty five minutes more than it should have done. Still I was back in time for lunch and L, who'd done his homework and then spent the entire rest of the morning gaming was happy enough. It had been a successful twitch and this hard to get species was finally in the bag.