Getting Rustic in Wanstead

After a year and particularly an autumn that everyone has been complaining about as unusually poor on the twitching and rarities front, suddenly in the last couple of weeks thinks have kicked off big time. With rares (and indeed firsts for Britain in the form of a White-rumped Swift up in Yorkshire) landing everywhere I had definitely been woken from my twitchless torpor and was keeping a keen eye on my RBA app for something appropriate to go for. The Grey Catbird down in Cornwall very nearly tempted me but it was just a bit too far, especially since I was going to be down there at the weekend anyway for a family half term holiday, so instead I decided to hang on and hope that it stayed long enough for me to see it. However, when on Tuesday evening a Rustic Bunting was found at Wanstead Flats in London this certainly piqued my interest being well within my preferred (though these days not very strict) two hour travel limit. Accordingly I decided to wait on news the next morning.


The next day it was reported just after 8 a.m. and then again at around 10. That was good enough for me but unfortunately a bit of unfinished work kept me at my desk for longer than I would have wanted so it wasn't until around 11 that I finally left. There was no further news until I hit the M25 where the dreaded "no further sign by 11:30" was reported. What to do? Recalling that I was faced with the same dilemma last time when I successfully twitched the Hampshire Ortolan, I declined the option to turn back immediately. My thinking was that by heading on to the site at the very least it would offer those already there a chance to refind it and if there was still no sign then I could fairly quickly give up and head back home. Mentally I downgraded my expectations on this twitch and soldiered on through the heavy traffic.


By the time I got to the M11 there was a "still seen at 11:32 though elusive" message. Perhaps there was hope yet! I negotiated the rather heavy traffic and shortly after 12:30 pulled up in the main car park on Wansted Flats. This was not a location that I'd been to before though I knew of it from the bloggings and photos of Mr. Jonathan Lethbridge, the Wanstead Birder. It turned out to be a large flat scrubby area plonked in the middle of a sea of Victorian housing. I could see how this might attract birds: in the ocean of concrete that is London this would be an attractive island of green. I tooled up and spotting some some milling birders in the general direction I was expecting, I hurried off to join them.


After a brisk five minute walk I asked the first birder I met what the situation was. He explained how the bird had been feeding in the area of burnt gorse for a while before suddenly flying all the way over to the car park, then back to here and then off towards some trees a good distance away. "No one really knows where it is at all" he concluded gloomily, thereby confirming my fears for this twitch. I soon met up with PL (I would have been surprised had he not been here, frankly) and also SJ who had twitched by train. They had arrived a good half hour before me and sadly had not seen the bird at all. We all milled around for a bit and then I decided to have a wander around to see if I could find it. To the raucous accompaniment of the resident Ring-necked Parakeets I wandered around scouring the scorched earth for Buntings. I'd been no more than a few minutes on my circuit when I noticed a change in the demeanour of some of the birders who were no longer milling but instead were actively scouring a burnt clump of gorse. I started to hurry over as a call from PL confirmed that it had been seen. It turned out that it had flown in calling and had landed in the aforementioned clump where it was presently lost to view. The assembled birders gradually worked their way around the clump, looking for that angle which would reveal the bird when it flew up into a branch and someone called it. I hurried over and got my first glimpse of it, with it's back to me, for a few seconds before it flew off a short distance. We all followed it as it made a couple of hops like this before settling in a patch by a couple of trees. There it flitted down to feed (it may have been seeded here) and back up into the tree several times before having a good preen and generally offering great views. Naturally I had a go at some digiscoping but the results were largely of record shot quality. 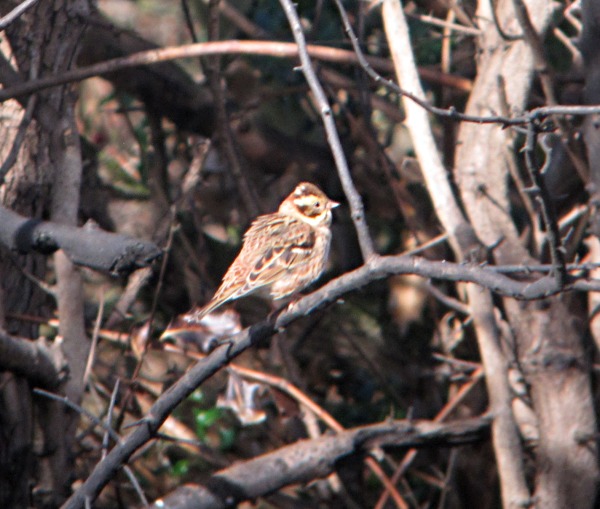 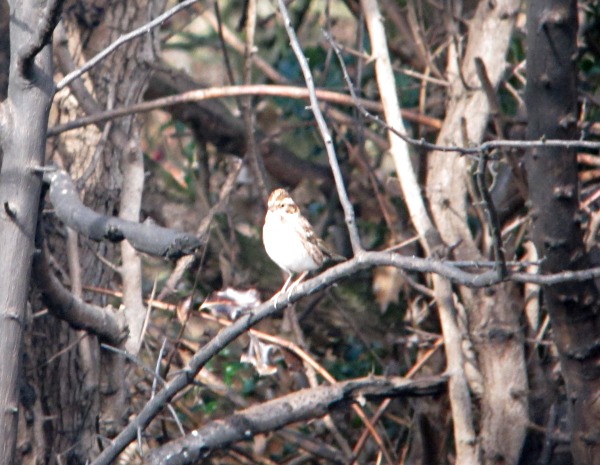 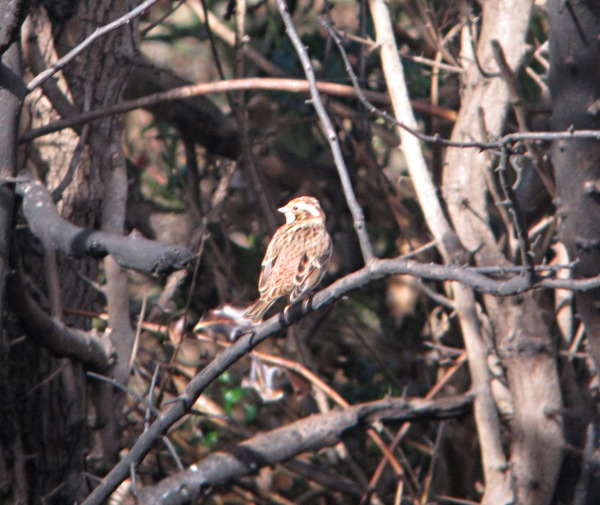 The bright light made things rather contrasty (hence the poor photos) though it was easy enough to see the diagnostic rusty flanks that made it a Rustic as well as the other more subtle features that marked it out from your common or garden Reed. After perhaps ten minutes of this it then flew a relatively short distance and landed in another clump out of sight. "Good enough for me" I thought and the Oxon crew took the liberty of some high fiving and indulged in some relaxed post-tick banter.


A few seconds of video of the Rustic Bunting

Having seen the bird relatively quickly I decided not to hang around but to head back as I had more work to finish off. Accordingly I had a quick half-hearted and fruitless wander around the clump where it had appeared to go down in before heading back to the car and de-tooling. I then headed off via a little detour to a petrol station that I'd noticed on Google maps from the night before when doing my pre trip research. Then it was back into the maelstrom of London traffic and the M25 and M40 where I arrived back just before 4 pm for my post twitch celebratory cup of tea.

I’d must check with you here. Which is not one thing I often do! I enjoy reading a put up that can make folks think. Additionally, thanks for permitting me to comment! casino games