My title puns are getting more and more contrived! Anway, it's all been rather quiet on the birding front in Gnome world of late. This is partially because of the lack of anything decent that I really "needed" and also partially because work is increasingly taking up most of my time now. I can only drool with envy when I read various other blogs where people have the time to go off seeing this and that. Unfortunately, that's not presently where I'm at with my life and I'll just have to put up with it.


There was a brief flurry of excitement on the Oxon county birding scene yesterday when at just before 6pm news broke of a Manx Shearwater at Farmoor found by DJ. Now this species has a history of turning up in Oxon in September. In fact since 2001 all three records have been in September:

Sep '04  Farmoor, with it or another returning a week later
Sep '09  Farmoor, spent all day there
Sep '17  Bicester, taken into care


The first one was before my time, the last one wasn't twitchable and I was otherwise engaged with family activities all day for the '09 one so was the perfect opportunity for the "grip back". I checked with my VLW who was just about to start the dinner but fortunately it was something that would keep so off I sped to Farmoor. After a bit of huffing a puffing up the causeway I was soon watching my first county Manx Shearwater. I'd been told by DJ and TS (who was also there) that it had been in very close just before I arrived but the large number of sailing boats that were out on the water kept pushing it about and it would fly a short distance before settling again. By the time I got there it was a fair distance out. I tried to do some digiscoping of it but my camera battery chose that moment to die so I wasn't able to do that. So instead below are some gripping photos taken by TS 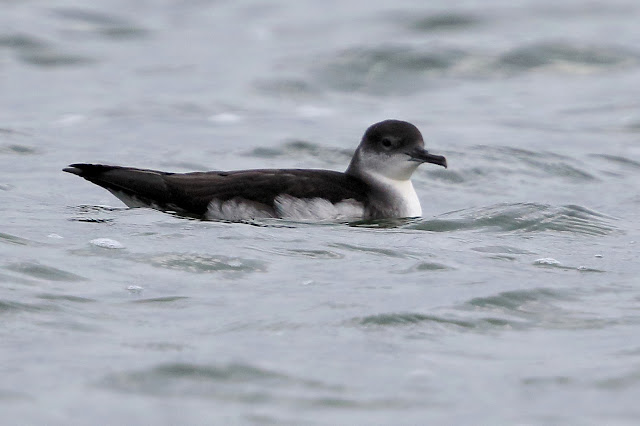 The others soon left and I decided not to linger very long so soon started to head back just as various other county birders started to turn up. It was nice finally to get a county tick on the board for this year - let's hope something else good turns up soon.