There are a couple of species that are recorded almost annually in the county yet which are incredibly difficult actually to see. For both these species the records are usually post factum single observer records, often from people who aren't regular birders or sometimes just photos sent to the county recorder asking "what's this bird which was in my garden recently". Each year I think "this year we'll get a twitchable one" but each year I am once again disappointed. Well, finally this was the year, for both species in fact: Hoopoe and Red-footed Falcon.


Three weeks ago on a Thursday news broke at around 11 am of a Red-footed Falcon right on the border between Oxon and Bucks at Piddington. The original source of the news was a Tweet by a worker on some railway embankment works who'd taken a picture of what turned out to be a female Red-footed Falcon looking for worms that were being dug up by the earth works. The modern world being what it is he was soon contacted by various keen locals asking for more information. He then asked his site manager who told him in no uncertain terms to delete the Tweet and that no access was going to be arranged for birders. In the end he deleted his whole Twitter account, such was the interest that he had inadvertently generated.


There was a certain amount of intense discussion within the Oxon birding community about the bird and some people seemed to know more details about where it actually was than others. What's more with COVID19 restrictions having only just relaxed to allow travel within your car for your "daily exercise", there was some debate as to whether twitching should even presently be contemplated. However as it was not thought possible to view it in anyway we all marked it down as yet another tantalising yet untwitchable record. A couple of enterprising young county birders even cycled out there and one or two county birders did go to case the joint by car but by mid afternoon the general conclusion that it was a non starter.


That lasted until about 5:15 pm when one of the young birders reported that he'd seen the falcon in flight from one of the two railway bridges that cross the line either end of the works. That was enough to kick the most twitchy county birders into action and a posse of Oxon's keenest duly sallied forth. Now, I'm not personally in the "go on any chance" kind of twitching camp and tend to be in the second wave of visitors once things are more confirmed, so I stayed at home - it all sounded too speculative for me. However, a team of county listers looking to unblock a long-standing county blocker (the last Red-foot was at Merton Borrow Pit in 1997) are a resourceful bunch and they eventually managed to work out a way to see the bird. However, due to COVID restrictions and the difficult nature of the viewing area where social distancing of any kind would be impossible with any numbers it was decided not to publicise the news to the wider community but instead to use the old fashioned grape vine quietly to pass news on to locals who were interested in seeing it. News duly trickled down to me so the next evening after work myself and a couple of other locals arranged a visit. Even though there's been no news for about a couple of weeks now, I'm not going to reveal any viewing details in case the bird should turn up again but suffice it to say that we all got reasonable views of this lovely bird and I even managed a few ropey digiscoped images. 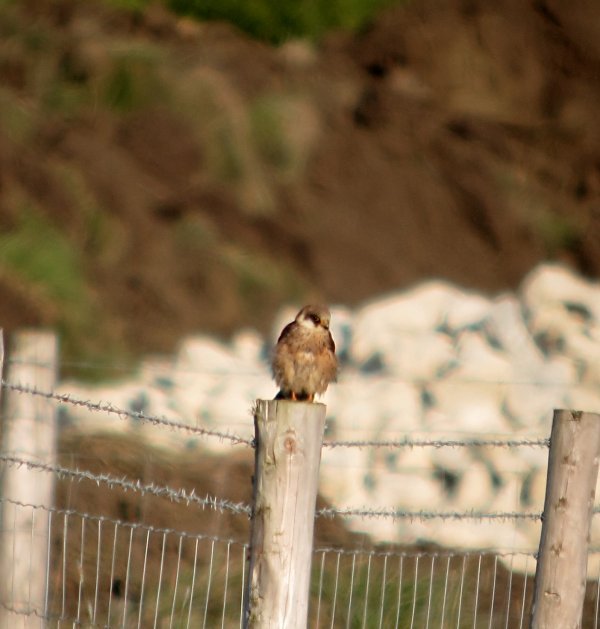 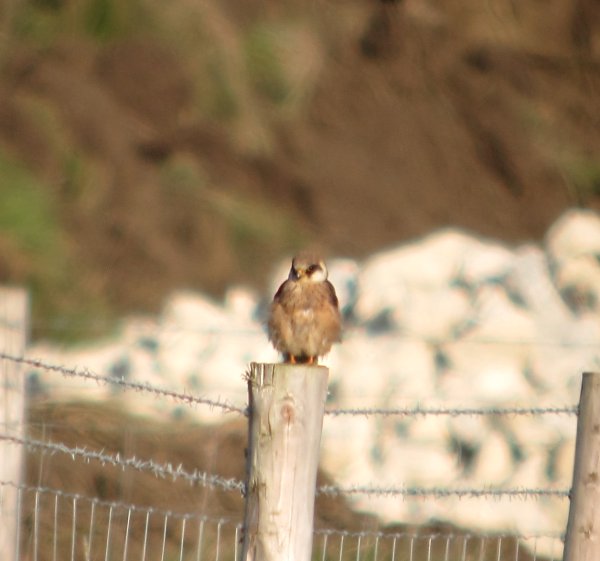 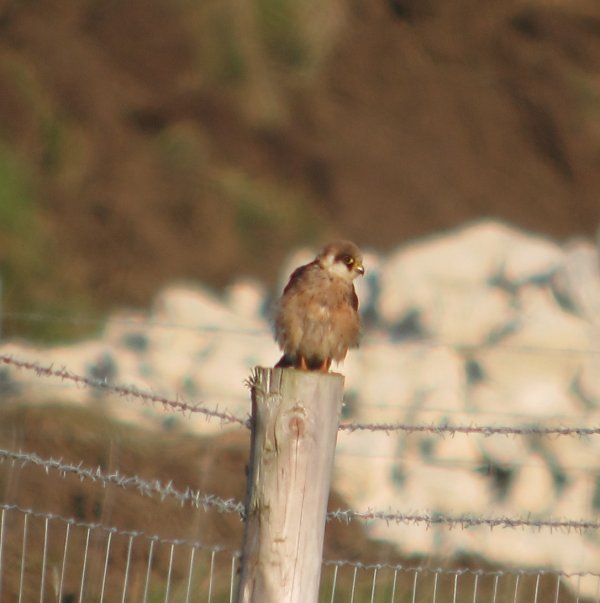 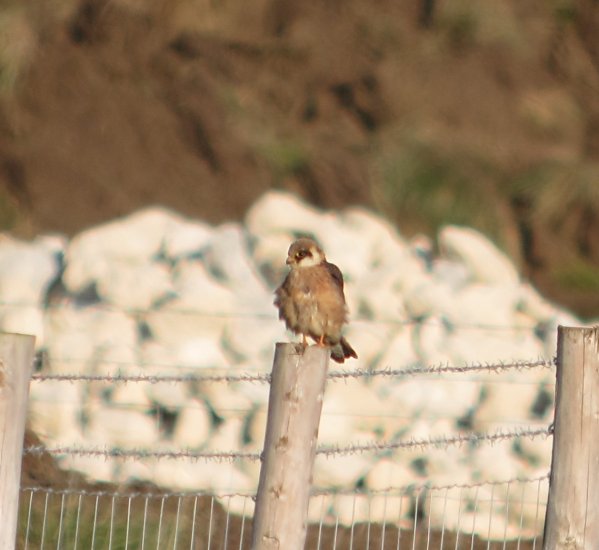 The following Monday news broke of a Hoopoe found again close to the Bucks county boundry, this time by the Bucks county recorder who it turned out actually lived in Oxon in Twyford just south of Banbury. The bird had apparently been seen a couple of times on the front lawns of a residential close though seemed rather flighty. I was working until 5pm so could only watch developments from afar anyway but there didn't seem to be any concrete news with just occasional reports of brief glimpses. It turned out that Badger was on site though as 5pm approached he told me that it has not been seen for an hour and a half so I was half expecting there to be no further news. However, shortly after 5 pm just as I was just switching off my company laptop for the day, he reported that it had been seen again briefly so off I went on the half hour journey north to Twyford.


Just as I was arriving CO was leaving and wound down his car window to report that it was showing incredibly well at the moment. I rushed to get my stuff together and sprinted down to the small crowd of half a dozen only to discover (of course) that it had just flown off. I was told that it was showing about once per hour so resigned myself to a long wait but in the end it was a little over five minutes before it flew back down onto its favourite lawn though it seemed to be spooked by something (the people standing staring at it I think) for it immediately flew off again. At least I could relax now and with the relief that comes of having seen the target, I started chatting quietly with the others. The bird made one more brief appearance but didn't seem to want to settle. Gradually people started to drift away until it was just Badger and myself. Having seen how flighty it was I decided to sit down and Badger was positioned behind a bush so we now offered a much lower profile and this seemed to do the trick as the bird came back, had a wary look around and then began to feed. In the end this lasted for more than ten wonderful minutes as it methodically worked its way all over the small patch of lawn, regularly digging up leatherjackets and tossing them down with gusto. 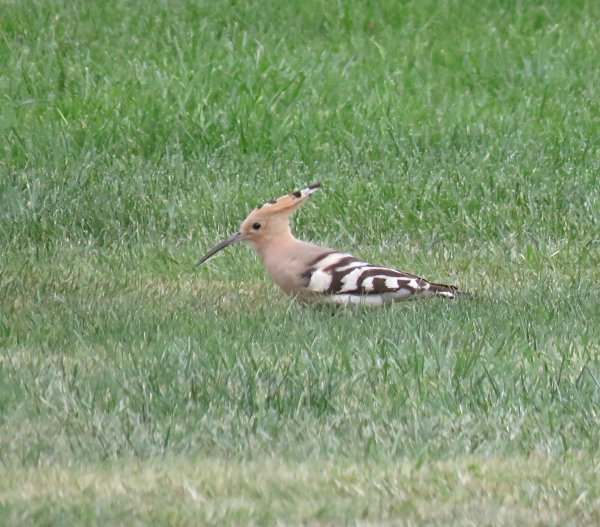 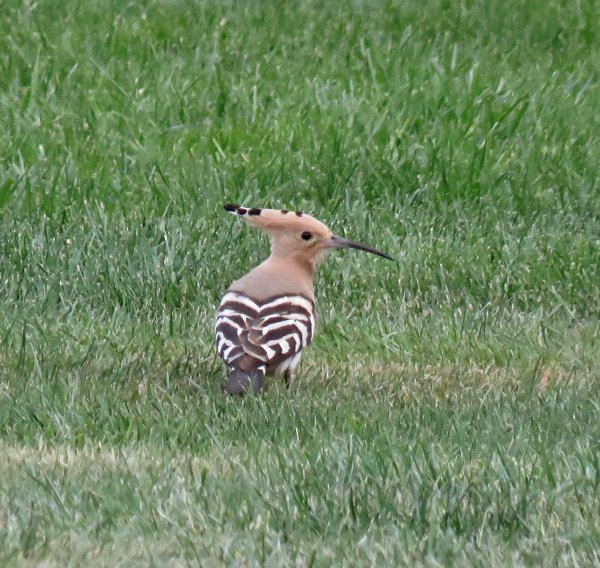 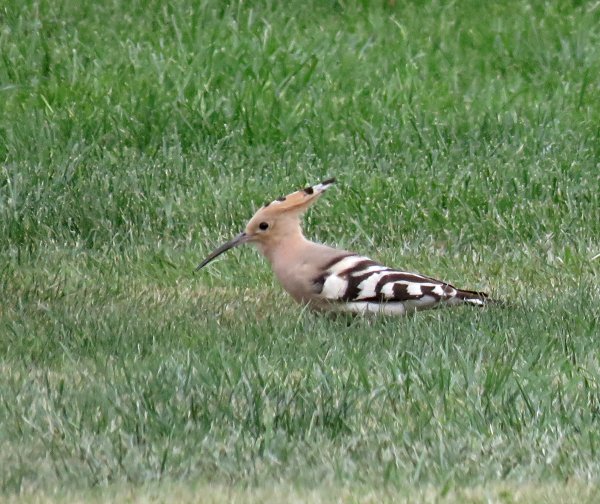 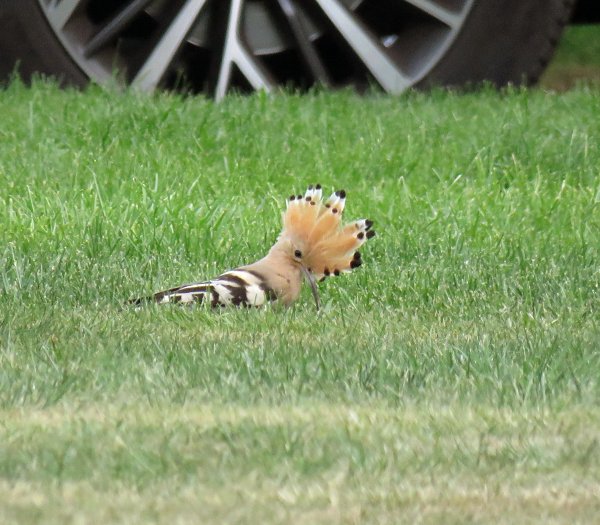 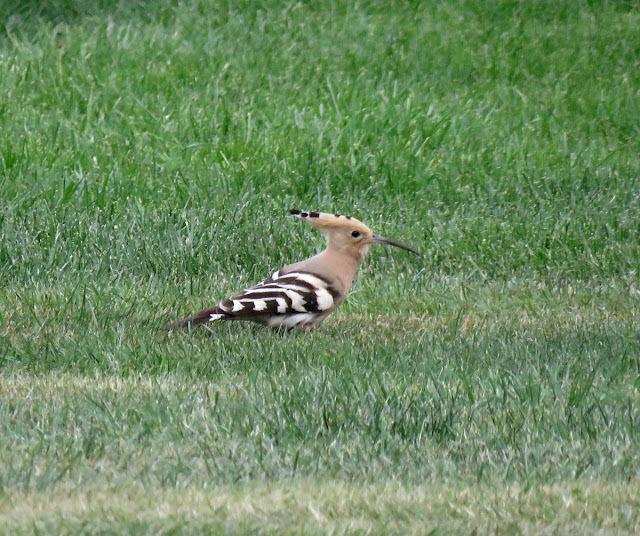 Eventually both Jason and I had taken all the photos and footage that we could with the equipment we were using (I was deploying my Superzoom camera and he was on his camcorder). He decided to go and get his digiscoping gear but before he could return a neighbour popped his head out his door right next to the bird and that was enough to spook it. It flew off to the end of the road, landed on a roof and then flitted off to another lawn. 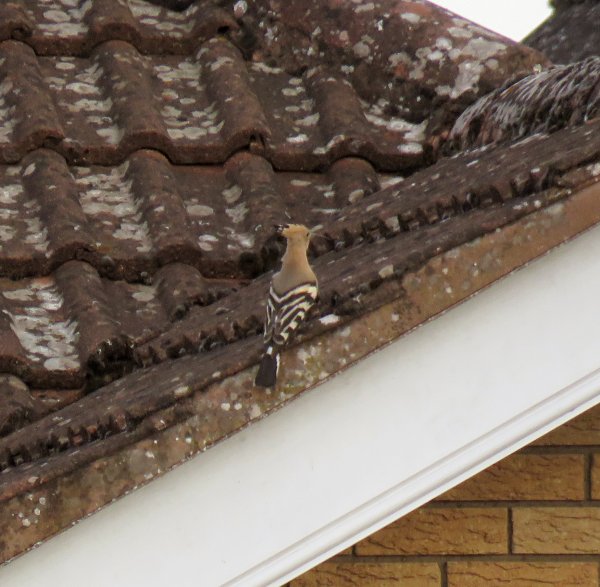 That was good enough for the two of us and we duly headed off, very happy with our views. The bird ended up staying one more day enabling plenty more county birders to connect with it. It was well and truly unblocked!

Lovely shots of the Hoopoe! The merits of how twitching happens especially during this time makes for an interesting debate.
Greetings from Sri Lanka!