I've been getting increasingly frustrated by my lack of good birding of late. As we all know, it's been a thoroughly weird spring as far as the weather is concerned and it's made for some unusual birding as well. I've been working my patch at Port Meadow hard and the year list (133) is such a good total that I'm now entertaining the possibility of a end of year record. However, just at the crucial time it was too dry and the vital floods that tempt all the lovely spring passage waders have dried up. Thus it is that my patch birding has died a death. The other strand to my birding is my little sorties that I make occasionally should something tempt me near by. As regular readers will know I'm somewhat fussy as to what I generally go for: I don't like to travel too far and I don't like to dip so I generally wait until something is nearby and well established before taking the plunge. However the list of trips that I've made this year is depressingly small and April and May, in which I'd normally expect quite a few outings, have been very quiet. A couple of weeks ago my VLW was going to London for the day, leaving me holding the fort. It was this day that the Dusky Thrush hit the pagers (well, strictly the night before) and I did suggest to her that I could take Luke, our six year old, out for a day trip to Margate. However, as both our daughters were in the middle of their exams, it was felt that I should be around to support and help them with their revision. Nevertheless, the possibility of my going the next day was agreed upon so I followed developments in Margate with a keen interest from afar. The bird was happily showing all day and so I reasoned that as long as it was still about on Sunday I should be able to get down there to see it at some point. Therefore I waited on news on Sunday morning rather than heading down there for first light. A smart move as it turned out of course as the bird did a bunk overnight. Nevertheless, this miss just added to my general level of frustration at my lack of birding action.


What all this frustration did do though was to crank up my level of alertness so that rather than being happy to wait for something to turn up and become well established etc. I was champing at the bit to head off at the slightest excuse. Thus it was that when a Roller turned up at Broxhead Common in Hampshire on Saturday I was very keen to go. Normally I don't contemplate a weekend sortie as it's generally considered to be family time. However, as my VLW had been away rather a lot I'd accrued quite a few brownie points and she seemed amenable to the idea. Of course we had to do the weekly food shop first but as the bird has supposedly been around for two days previous and was being reported regularly on RBA I was fairly relaxed about it. Back from the shopping some time after 1pm, I quickly knocked up a packed lunch and headed out in the Gnome-mobile for Hampshire.


It was located near Farnborough, always an awkward spot to get to: somehow between the A34 south and the M40 west so some wiggling around is always called for. I chose to head south first down the A34, then once into Hants I cut across to Newbury, Basingstoke, nipped up the M3 for one junction and eventually arrived about one and three quarter hours later at Broxhead Farm Road. Scattered cars jammed into every area that could conceivably be considered a parking place showed me that I was at the right spot. Given that it was later on in the day I figured that some of the parking may have been freed up nearer the bird location and as luck would have it I found a spot right next to the start of the footpath. A walk of no more than 50 yards and I came across the twitch, now numbering about thirty or so birders though there was no one that I recognised there apart from Jonathan Lethbridge (The Wanstead Birder) complete with children - a life tick for me though I've chatted with him on Twitter occasionally. Everyone was intently watching the Roller which was on show right from the start. This is how twitching should be - none of this hanging around staring at bushes for ages. The bird was at the back of a large clearing, by the edge of a wooded area and was flying between different perches where it would sit for a while before moving again. And what a stunner it was. About the size of a Jay, but a brilliant azure blue body with a cinnamon brown back. When it flew it revealed a riot of deeper blue lesser coverts, azure greaters and black flight feathers. I quietly enjoyed this exotic beauty and set about trying to squeeze some photographic footage from the heat haze. This turned out to be quite problematic, particularly when it was on its lower perches where it would become nothing more than a brilliant blue fuzzy blob. Higher up was better and it actually gave reasonable views through the scope. 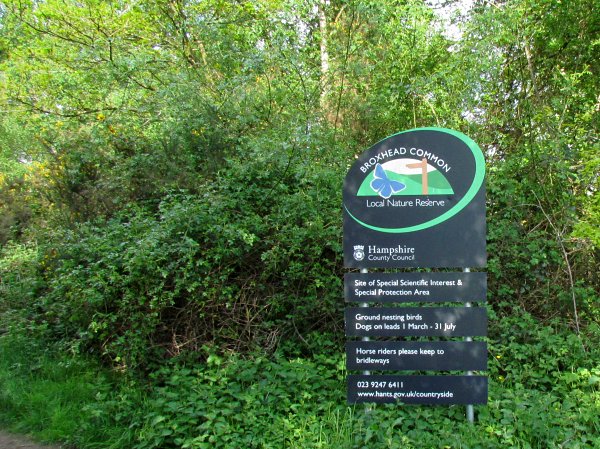 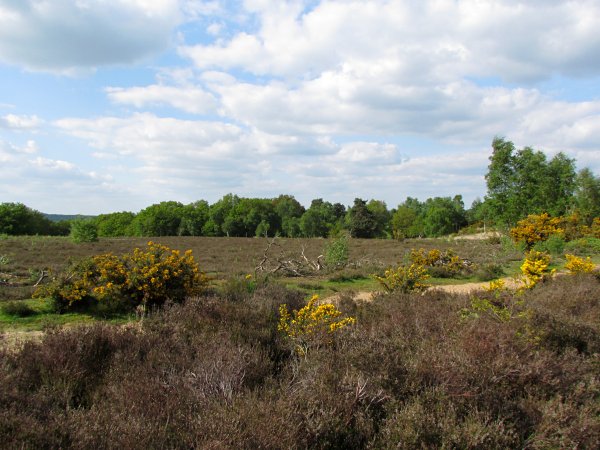 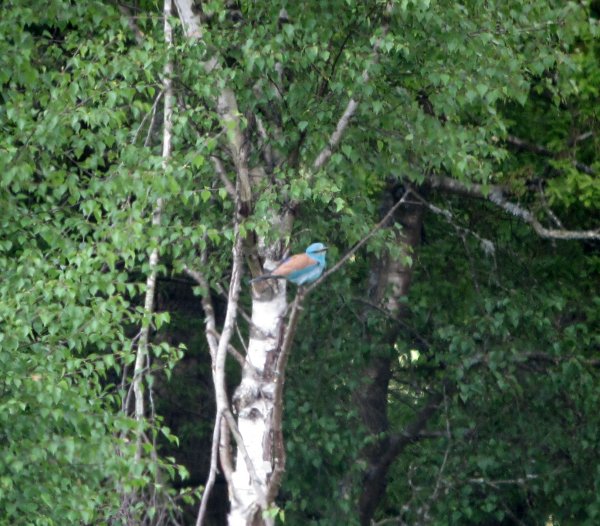 
After about half an hour it flew off in a big circuit behind some trees to the south. Some people went off in search of it but many, myself included, who'd already had good views were content to stand around waiting to see if it would turn up. I spent some time watching a couple of Woodlarks that were flitting around - not a bird that we generally have in Oxon so I always get excited when I see them. A raptor went up and got a good grilling from the assembled crowd before being identified as just very pale a Common Buzzard. I listened to the general hum of conversation, a London birder was talking about the number of celebratory Stella's he and his mates were going to indulge in that evening. Suddenly I picked the Roller up again in flight and called it out to those near by. It settled in a tree about one hundred and fifty yards away where it stayed for a good ten minutes before flitting off again. At this point I was content that I'd seen enough and so wandered back to the car and headed back home, this time trying the M3, M25, M40 route which, though further in distance, turned out to be some ten minutes quicker. I arrived back home in time to cook the family dinner (which I usually do on Saturday night), thereby clawing back a few of the brownie points that I'd spent that afternoon. It had been worth it though - what a stunning bird it had been. What's more, it left by 9:30 the next day so had I adopted my usual tactics of waiting until a weekday I'd never have seen it. Clearly, there are time when it pays to drop everything and go. 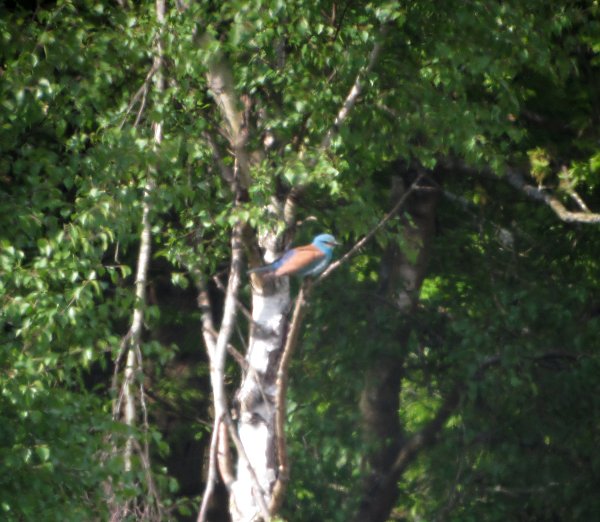 Long-time readers of this blog will remember that I got into moths last year as an antidote to the summer doldrums and that I then discovered that actually I really enjoyed mothing. Not that my garden is particularly good for moths, in fact its rather a moth desert, certainly compared to other gardens. Steve Goddard in Wolvercote also traps and regularly catches two or three times the numbers that I do and also gets a much wider variety of species. Nevertheless, mothing has certain advantages: it can be done from the comfort of ones own home, it involves the same tricky getting to grips with ID issues as birding, it involves listing and it can be done in the summer months when the birding is quiet. Not that it will ever replace my birding which will always be my first love but it's nice to have some diversification. Anyway, it rather seems that summer has come early: now that we're finally getting some decent weather all the bird action has dried up. I've not been on an out-of-county twitch for quite some time now and I'm starting to get itchy feet - I really could do with a nice juicy twitch. Talking of drying up, the flood waters on my beloved Port Meadow patch are going the same way. It's been such a dry spring that they're almost gone now, just at the crucial start of May period when one can expect the best birds. No wonder I've turned to the moths already. Actually, I've got involved with the Garden Moth Challenge, one of these multi-contributor blog/competitions that seem to be all the rage this year thanks to Twitter. I was rather reluctant to start with as my garden is so poor for moths but I decided in the end that at least it will give me an incentive to get mothing more regularly and indeed so it has. The rules are simple: it's a year list tally of all moths and butterflies within one's garden so I've dusted down the trap and have been running it most evenings when the weather has warranted it. It's also been interesting to read what other people are catching and to discuss our catches on Twitter each morning.


Last year I didn't start mothing until the second half of the year and so I missed a lot of the early moths so there's been plenty to catch up on. For much of April all I caught was various combinations of a few spring moths.


When the warm weather really kicked in, it was noticeable how suddenly the spring moths disappeared and were replaced by Carpets, Pugs and micros. Well for me at least, other moth'ers were reporting all sorts of lovely exotic specimens but I seem to get stuck with the interesting small stuff!


The best that I can hope for in my garden is to find something that adds to the Upper Thames Valley moth recording area year list. So far I've managed to add Caloptilia rufipennella. In addition the V-Pug and a Cnephasia sp. may well both be as well though I'll have to wait for their next update to find out if anyone has reported one before me. In the mean time I'm having lots of mothy fun in my garden whilst waiting for the birding to kick off again. Now that we've got some rain and wind forecast for the next few days perhaps that will be enough to get things started on the bird front but in the mean time at least I've got my moths.