There have been a few outings which I've been meaning to write about for a while now, all local stuff but still worth recording in my "diary". The first was a rather nice Water Pipit which turned up at Farmoor at the start of the month. The reservoir is the best site in the county for this species and I've seen a few over the years there but with nothing else happening one Saturday late afternoon and with the light already starting to fade, I hurried along the causeway and all the way around to the north west corner of Farmoor 1 (basically about as far away from the car park as it's possible to get) where I spent some time watching this rather nice bird in the company of just one other person. The light was rather poor by this time but I managed to take some record-shot video footage


The next bird of interest came along a couple of weeks later when a Scaup was reported at Farmoor. At the time someone commented (on the Oxon Birding Blog), asking why it wasn't in fact a Lesser Scaup though I'm not sure how many people saw this comment (I certainly didn't). The next day someone e-mailed me with some more photos, taken at the end of the day in poor light of the bird but at least they were done at close range and the bird certainly looked like a Lesser to me. I forwarded them to "Lew" (Ian Lewington our esteemed county recorder) and he agreed. The word was put out and I mentally prepared for an outing to Farmoor the next morning, particularly since Lesser Scaup was a bird that I still needed for the county. The last records had been a couple of birds in 2007, one at Appleford and one at Sonning Eye GP, both reasonably long-stayers but as I'd only just started birding back then I wasn't doing a county list at all and hadn't bothered to go and see either of them.

The next day rather than being there at first light I waited on news, partially as I've never been a huge fan of the early start and partially as my VLW was away at present so I was left looking after our eleven year old son so I didn't want to leave him alone in the house for longer than necessary. I'd more or less given up hope by mid morning when there was still no news but eventually it was found, in the south west corner of Farmoor II. I therefore hurriedly set off, parking at Lower Whitely Farm to minimise the walk and a short while later I was looking at my first Oxon Lesser Scaup. The great and the good of the county (well at least those lower down the county listing table) were all there and we passed the time in some general chit chat and banter whilst photographing the bird. 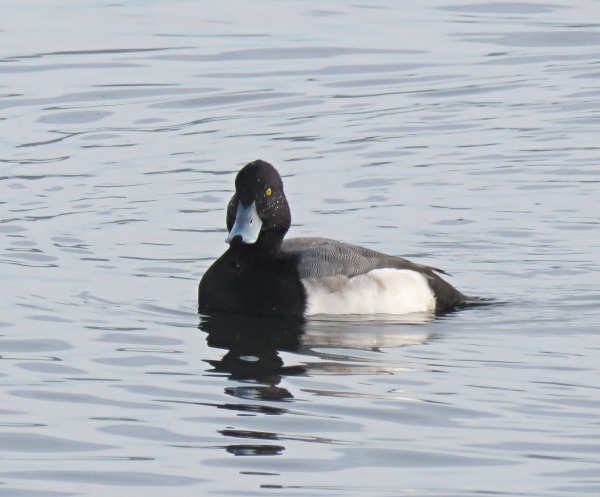 All was fine until later on that day I got word that Lew was starting to have doubts about the bird. Apparently there were certainly things which didn't quite tally so he was going to take a look for himself then next day. Anyway, to cut a long story short, it turned out that it was actually a hybrid (either Scaup x Lesser Scaup or Scaup x Tufted) rather than the real deal. The main reasons why were:
1. it was too large, being larger than the accompanying Tufted Ducks rather than about the same size
2. the vermiculations on its back were too fine and didn't become progressively coarser along its back as they should do
3. most importantly of all it didn't have the correct wing pattern of much fainter wing bars on the outer half of the wing. This is a well-known diagnostic for Lesser Scaup though I hadn't personally had time to check it out during my relatively brief visit.

So the Lew giveth and the Lew taketh away again and I still "need" Lesser Scaup for Oxon. Oh well!

The third local bird to report is of course the Hawfinch. All birders with any interest in what's happening nationally must by now be aware of the irruption of continental Hawfinches into this country this autumn. Indeed I'd been keeping my eyes to the skies for some time around my patch at Port Meadow though so far in vain. I'd even visited nearby Wytham Wood on three occasions as they have a large Hornbeam plantation there though to no avail. Finally, a reliable spot was found in the county where they could be seen though how they were discovered in the first place is quite a mystery as it's a very unremarkable location down a minor road off the A40 near Eynsham Hall at Barnard's Gate. Anyway, I've made a couple of trips there where, in the company of a number of other birders, both local and from further afield, both times I've had distant views of several of this pleasingly massive Finch as it perched in the tree tops a good 150 yards away. I did try to take some digiscoped photos though on both occasions the wind, the poor light and the long distance has meant that they've been little more than record shots. 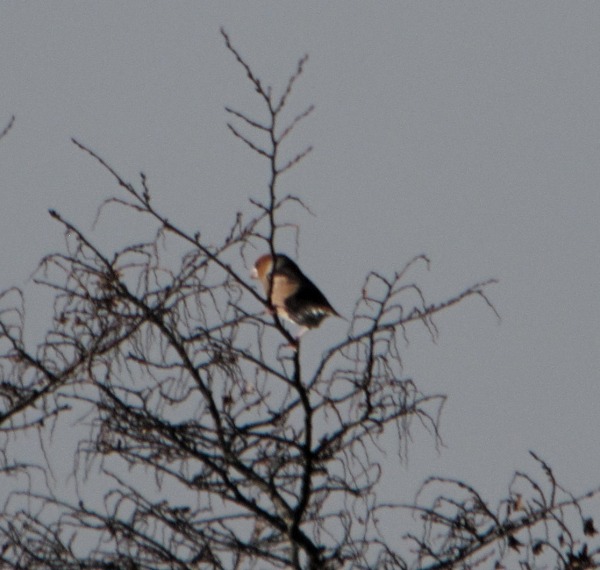 I still live in hope of seeing a fly-over on my patch and with any luck a better location might be found where closer views can be had. Still its very nice to have this bird graving our county with its presence for a while.