Last of the Autumn Lady's Tresses

Just a bjiou postette relating to the weekend. I'd noticed on Steve Gale's North Downs and Beyond blog that he'd seen some Autumn Lady's Tresses (a small but beautiful Orchid) up on Epsom Downs by the grandstand early on in September. Now my parents live at the bottom of the road leading up to Epsom Downs and as it happens we were due a visit there for a gathering of the clan to celebrate everyone's birthday. In theory we're supposed to meet up once for each person's birthday but in practice everyone is so busy that we're lucky if we manage one or two meetings a year. Anyway, we'd managed to find a mutually acceptable date so this weekend we all (i.e. my brother and his wife, and my sister and her partner) converged on the parental home. After much feasting and exchanging of gifts we decided on our customary walk up to the Downs where I suggested a minor detour to look for this orchid. Thanks to helpful instructions from Steve I managed to find a few of them still in flower though the others were less than impressed when they turned out to be so small (they're only about 15 cm high). Still I was pleased to see them and it made a nice little bonus to the day's activities.

First off, I first must 'fess up to a hitherto unreported out-of-county outing recently though the result was some horrible dippage so I've been reluctant to blog about it. I went to Slimbridge to try for a juvenile Purple Heron there last week. I arrived at the hide five minutes after it was seen, I stayed for three hours with my eyes glued to the area of Juncus it was hiding out in to no avail and then I left only for it to be reported on RBA again about five minutes later as I was walking back to the car. I ran back to the hide and tried for another hour but it never showed again. To cap it all on the way home there was a road closure and subsequent horrendous traffic jam. Not a good day!

You often don't appreciate something fully until it's gone. This is proving all too true as far as my patch on Port Meadow is concerned. I'm incredibly lucky to have it no more than a few minutes walk away from my front door which is so handy yet I often take it for granted. Obviously the patch isn't actually "gone" but with no flood water at all I am reduced to slogging around Burgess Field (or Birdless Field as I've taken to calling it) in the vain hope of finding a migrant or two. The lack of variety or indeed birds at all has been taking its toll and so I've started to make some trips elsewhere within the county just to see something. Farmoor, is nice and close being only 20 minutes away so I've made a couple of trips out there. Whilst to many its an ugly concrete bowl (and indeed it is) it does has some redeeming features: there's a lot of sky and water there, the sound of the waves lapping against the shore can lull you into thinking that you're somewhere more remote and of course it is good for birds. I find that I can do the round trip to the reservoir, walk the length of the causeway and back and get back home in a couple of hours so it doesn't take too much of a chunk out of my day.


The first time I visited it was wonderfully overcast and several Black Terns were gracing the reservoir as well as a gorgeously dainty first winter Little Gull; there was even a handful of waders with a Ruff, some Turnstones and the ubiquitous Dunlin all to be seen. The Hirundines were zipping about everywhere in the gloom and when the weather is overhanging like this there's always the sense that something really good could drop in at any moment though of course it rarely does. Still it was great to see a nice mix of birds, especially the Black Terns which I'm not likely ever to get at Port Meadow 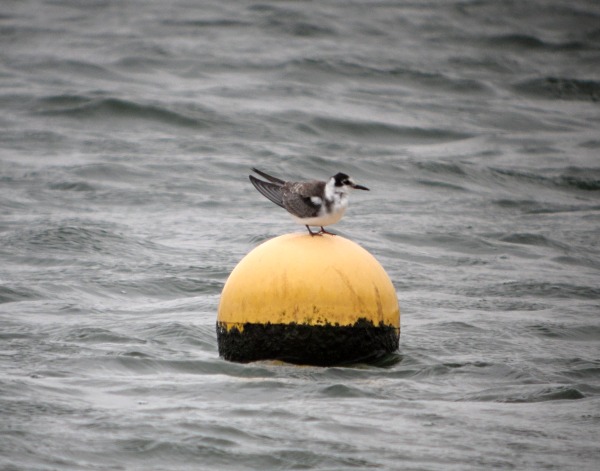 I'm still visiting the Port Meadow most days but on Monday I found that when I'd walked through Birdless Field without seeing a single bird at all I'd come back feeling really down, a sure sign that I needed to get away from the Meadow again. Accordingly yesterday I went to Farmoor for another visit. Nothing had been reported there over the last couple of days but once again it was nice to be somewhere different. There were only four Dunlin along the causeway, some starting to moult to their winter plumage but I felt that the change of scenery was doing me good. I met up with a birder from up-county who was just starting to get back into the hobby and we birded the causeway together chatting amiably as we went.


At the top we parted company and I headed back down the causeway whilst he went around F1. I was just trudging back to the car when I spotted a Wheatear sitting quietly on the grass just at the top of the car park area. It sat perfectly still, pausing contemplatively on its perilous journey southward and I took some time just to admire its understated beauty. Indeed it sat so still that I was able to get my digiscoping gear out and take a few shots. Suddenly a car drove by as I looked away and when I looked back it had gone. It's often quiet moments of appreciation like this as much as chasing down rarities that make birding the enjoyable pastime that it is .

Regular readers will have noticed that there's not been much activity on this blog for a while now. In fact since the largely birdless family holiday in August I've not been out on any trips at all - this hasn't been for lack of keeness, there just hasn't been much for me to go for. With the insect season now over it's all down to birds and it's been fairly quiet on that front apart from a wave of drift migrants that hit the east coast a while back. I could only look on with envy as a few weeks ago all down the right hand side of the country a wave of Wrynecks, Icterine and Barred Warblers and Red-backed Shrikes were washed up on the coast. Gradually one of two of these birds have been filtering down through the country and indeed Oxon has been blessed with a total of three different Wrynecks already this autumn which is a great tally.


One other such inland bird which has caught my eye over the last week or so was a Barred Warbler which turned up at Staines Moor, not more than an hour's drive away. Now, I don't "need" Barred Warbler - I've seen one in Norfolk (albeit just in flight a few times) and I even found one for myself down at Pendeen though that was only on show for a few seconds. So whilst this would be nothing more than a year tick, the prospect of getting what were by all accounts prolonged views of what is normally a skulking a secretive species was rather tempting. So when Monday dawned bright and sunny and with a US bank holiday meaning that the financial markets would almost certainly be lifeless, it seemed like a no-brainer to go and pay it a visit. After completing some tasks for my VLW, at around 10 a.m. I was speeding down the M40 towards Heathrow Terminal 4 and Staines Moor, an area I know well as my mother-in-law lives nearby in Stanwell. Of course I also know the Moor itself from the Brown Shrike that turned up there a few years ago. At the time I remembered it as a rather nice site with lots of good habitat and so it proved when I completed the fifteen minute walk from the car to the Moor.


There was a small group of birders staking out a large Hawthorn to the north so I crossed over the River Colne and wandered over to join them. Even as I approached I could see the Barred Warbler, standing out like a saw thumb in the top left-hand side of the tree and indeed it was on show more or less constantly the whole time I was there. The nice thing about larger Warblers is that they move relatively slowly compared to their smaller cousins and as this one seemed happy to stay out in the open it was relatively easy to track. I busied myself with taking some digiscoped photos as it worked its way through the Brambles and Hawthorn. They certainly won't win any photographic prizes though at least you can see what it is. 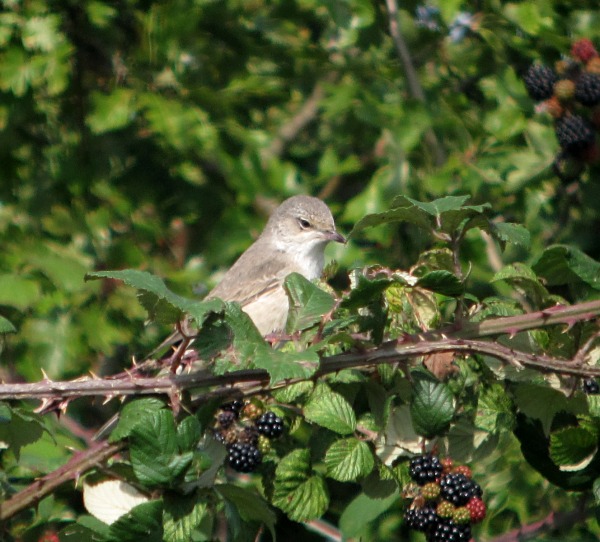 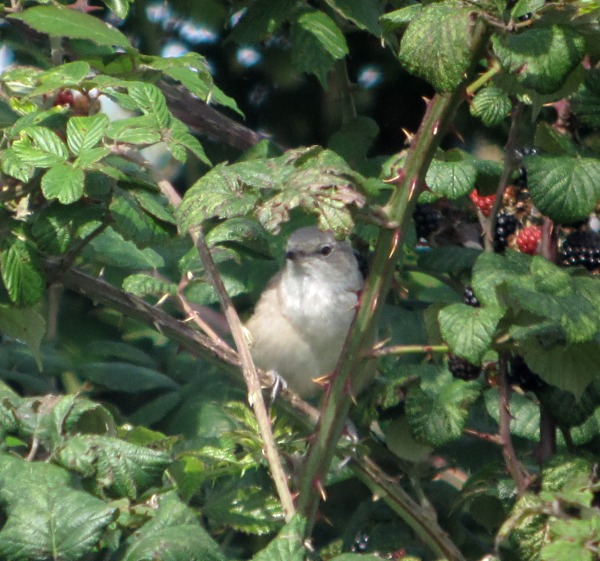 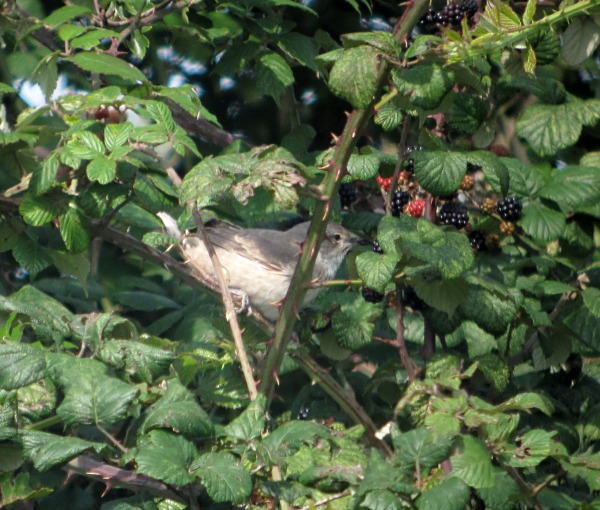 As well as the star attraction there were several Whinchat in the surrounding area which were nice to catch up with - I've yet to see this lovely chat on my local patch this year. A couple of Hobbies were hunting overhead and a Kestrel and Sparrowhawk were also on show. To add to the day list I'd also heard Ring-necked Parakeets calling as I'd pulled in to Staines Moor, another year tick.


There were never huge numbers of birders there, perhaps a dozen at most at any given time so it was nice and peaceful. Just as I was starting to think about leaving someone arrived to join the twitch line looking rather anxious. I told him where the bird had been though it had just ducked out of sight at that moment. He worriedly told me that he'd come down a couple of days ago but that it hadn't been seen again all that afternoon so this was his second attempt. "It should show again pretty quickly", I told him and of course after that there was no sign of it for a good twenty minutes. I started to worry for my new companion as this was rather out of character for the bird which hitherto had been constantly on show. In the end to help him out I decided to walk around the back of the Hawthorn clump to see if it had moved around there. Around the other side there it was, right out in the open and preening itself on a bare branch, showing the best since I'd arrived. Of course I'd left my camera back around the other side. I called over the other birders who came around to see it and I went back for the camera though it had ducked in again by the time I'd returned. At least the new birder had managed to see it though. It showed on and off for a while before it flew to a more distant bush and then back again and finally ducked back into the centre of the clump.


I'd seen enough now and time was marching on so I decided to head back to the car. On the way back I met another birder watching a pair of young Little Owls sitting in one of the fields. I took a quick photo though in the heat haze it was rather blurry.

Then it was back to the Gnome Mobile and off home in time for a late lunch. It had been good to get out again on what had proved to be a very enjoyable bijou twitchette.