There's not been a great deal about of late to tempt me on a Gnome sortie. As I don't have a great deal of free time presently due to work commitments I don't generally go out of county unless it's something really good (usually a life tick or something). However, I'm prepared to go short distances for something interesting and this week there have been a couple of very local birds in my home town of Oxford. Anything within walking distance has to be fair game and when Thomas Miller found a female-type Black Redstart loitering around the back of Christ Church College I thought that I would go and take a look. So last Sunday when my VLW said she wanted to nip into town for some shopping I decided to accompany her and to go and take a look for my self. It turned out to be easy enough to find, in amongst the first set of ivy on the south facing wall of the college that overlooks Christ Church Meadow. It seemed very much at home, treating the wall like a cliff face that is its more usual home. I was reminded of the bird a few years back that took up temporary residence in the courtyard of Lincoln College and like the bird today, spent its time picking insects out of cobwebs and from the ivy that was clinging to the walls. I spent a pleasant half an hour taking photos with my super zoom camera though the distance was just a bit too great for them to be of top quality. 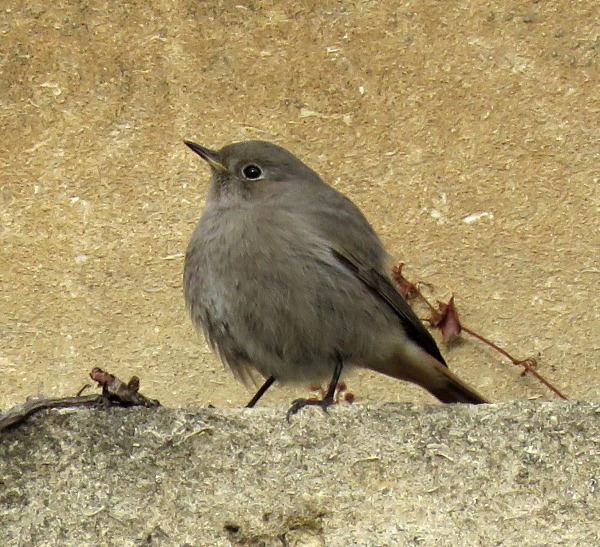 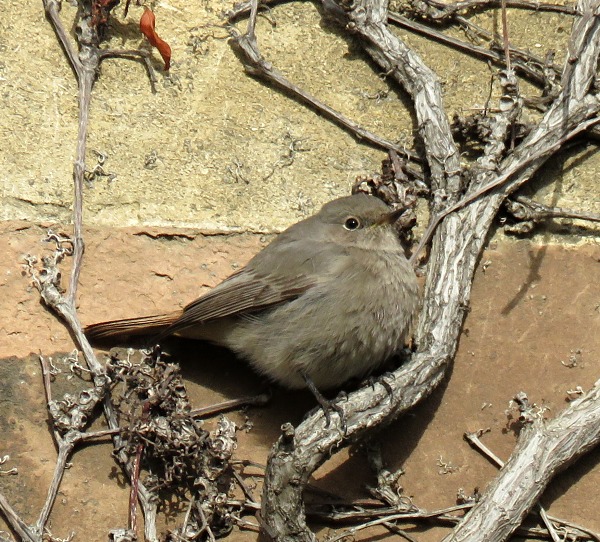 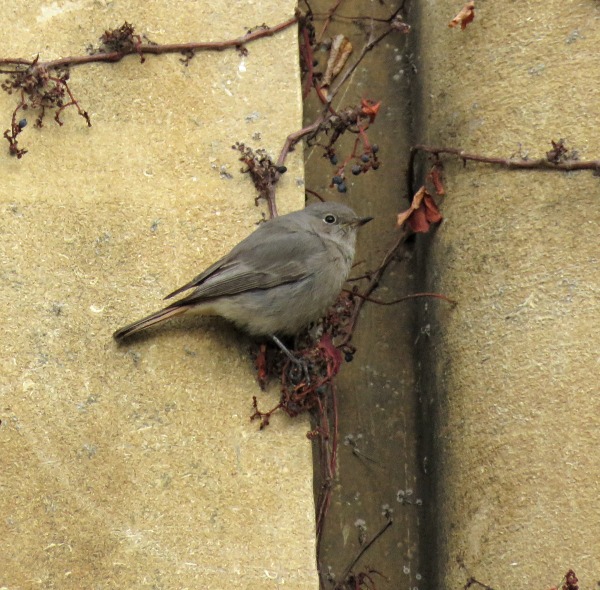 A day or two later a pair of Ring-necked Parakeets were reported a couple of times in University Parks. Now this species is not yet that common in the county with a small colony down in Henley the only stronghold. However over the years there have been various sightings and the last couple of months of last year there were several sightings about Oxford itself including one that flew over my head near Port Meadow. Anyway, it seems that there are now two of them and that they've gravitated towards the University Parks which is obvious habitat for them. I'm rather hoping that they are going to get established there now. I know that some view them as pests but for me they are a very colourful and enjoyable addition to a city's birdlife. Anyway, so this week my computer power supply took it upon itself to blow up on Wednesday evening and with no computer I wasn't able to work on Thursday. Therefore, as it was a beautifully sunny but very cold day, I decided to take a walk down to the University Parks to see them for myself. Once I'd got to the Parks I wandered slowly over towards the river, souring the trees as I went but it was just the usual mixed Tit flocks to be seen. The pond itself was frozen over with the usual Mallards and Black-headed Gulls all loafing around waiting for their next batch of hand outs from visitors. It's great fun to throw bread at the gulls and watch them catch it in mid air and the braver ducks will feed from your hands but I was breadless today.


I was just passing around the back of the pond by the river when a strident bird call woke me from my reverie. "That's a funny sounding Parakeet" I thought to myself before my befuddled brain engaged properly and I realised that the Kestrel-like call was that of a Lesser Spotted Woodpecker. It had flown right overhead but right into the sun so I'd not been able to see it at all. However it called again and then started drumming on the far bank somewhere. I hurriedly tried to find it in the nearest treetops but wasn't sure if it was there or in the next set of trees further back. I therefore hurried over to the Rainbow Bridge and crossed over. It drummed just once more but then fell silent so I wasn't able to track it. I hung around for a bit but there was no further sign so I went back to the bridge (where I'd still be in earshot) and started to look for my original quarry which I'd been told, usually loitered in the trees near the bridge. There was no sight nor sound of any Parakeets to be had and no further sound of the Woodpecker either. I wanted to hang around a bit more in case either bird should call again so I decided to tramp about in the overgrown wet Meadows to the right of the path where I'd read a Woodcock had been flushed a few days ago. I spent a good half an hour tramping about to no avail, with nothing more than damp feet from my leaky boots gained for my efforts. So I headed back towards the bridge where I heard the sound of a calling Parakeet and lo and behold, there was a single calling bird. It didn't settle before flying back towards the centre of the park. I followed it but disappeared without my being able to get a photo.

With time marching on I decided to head back home. On the way I met a fellow birder who was asking about what I'd seen. I told him about the Parakeet and it turned out that he worked at St. John's College where he saw them in the college grounds from time to time. I am assuming that it's the same pair touring the city centre rather than other birds. I also mentioned the Lesser Spotted Woodpecker which he was most interested in.

The University Parks used to be a know hotspot for seeing this species though there haven't been any reports there for quite a few years. Sadly the bird today had been heard for no more than five minutes and with no further sight or sound of it in the ensuing hour or so it was in all probability just passing through. In addition Greater Spotted Woodpeckers tend not to take kindly to their presence and this larger species has been reported regularly in the subsequent days by people looking for the Lesser Spotted. Indeed the last time I was lucky enough to find a Lesser Spotted (on the Trap Grounds by Port Meadow) it was again there only for a few minutes before I watched a Greater Spotted chase it off. Therefore, I don't hold out a great deal of hope of it being found again though the habitat was fantastic. Let's hope that despite the odds it makes another appearance.