Waiting for Something Good

Since my last entry I've been pounding the patch, waiting for something good to turn up. I was rather disappointed that the hoopoe hunt came to nothing and am starting to feel "twitchy" about seeing something new so I shan't be surprised if I find myself heading off somewhere in the near future if nothing good turns up in the county shortly. In the mean time it's been a matter of catching up with the various spring migrants as they turn up. Many of the birds I know will turn up at the patch and I supplemented this with a recent lunch-time visit to Otmoor.

I've managed to get the complete set of 10 county warblers all within my patch which has been nice. Lesser whitethroat and cetti's aren't always guaranteed though the last couple of years now we've at least had them passing through. The last warblers in were the garden warblers and Burgess Field in my patch is now alive with warblers everywhere. 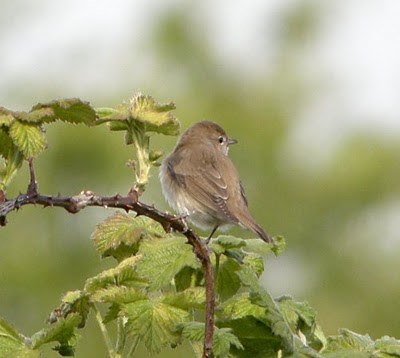 Digiscoping warblers is tough at the best of times but this garden warbler stayed put long enough for me to get a few shots off.

There were some summer birds that I wasn't likely to get on the patch so I decided on a lunch-time run to Otmoor as a change from running around the patch. I was hoping to find a whinchat or two and therefore chose a day when there would be no firing range activity so I could visit the Saunders Ground and the Pill where I saw some whinchat last year. I also feel that this area is not watched as heavily as the other areas so it would benefit from a visit. I was amazed at how lush and verdant it all was and there were warblers everywhere you looked or listened. There were plenty of butterflies to be seen with brimstones, small whites, orange-tips, peacocks and small tortoiseshells all on the wing. I first headed over the Saunders Ground where I was rewarded with the sight of a marsh harrier zooming low over the hedge with something quite large in its talons being pursued by a red kite which was mobbing it and trying to get it to drop its catch. However the kite was far too slow to keep up with the harrier which sped off to the next field to eat in peace. There were no whinchat to be seen but a pair of garganey on the Pill itself was good compensation and I also heard a distant calling curlew and a cuckoo. Back along the bridleway and a turtle dove was purring away and two were briefly glimpsed. I had my first visit to the new hide which is very impressive and spacious inside and the Ashgrave floods were looking good though ideally they could benefit from a bit more vegetation around the scrapes. A cracking male wheatear was making use of the new posts in Big Otmoor just by the screen turn-off. This was in fact (rather embarassingly) my first wheatear of the year for the county. Several times on my visit I saw a single hobby flying around though it could have been the same one each time. 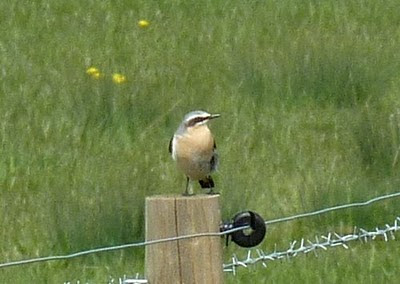 The wheatear by the turn off to the first screen, making use of the posts (taken with my P&S camera)
I finally got my first terns of the year with a pair of common terns on the Meadow. I've not managed to catch up with the artic terns that have been passing through Farmoor so far (not that I've tried) though I think that they've mostly been fly-throughs. There have also been some sandwich terns passing through which I still need for the county though the first lot were a fly-through and the second were reported at Cassington GP somewhat after the event (I presume). 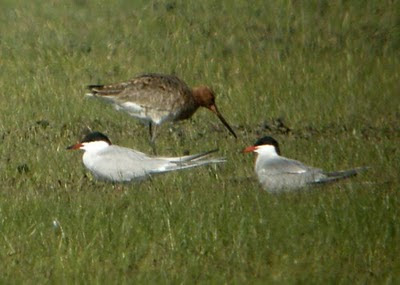 Two common terns on Port Meadow
Some book keeping for the year lists. I am allowing heard-only for both national and county year lists and finding it very nice not to have to chase all over the place for stuff once I've heard it. So far the only birds which are actually heard only are cetti's, cuckoo and the Oxon curlew though I dare say I'll get to see them in due course. In the mean time it's back to waiting. With Port Meadow looking pretty good at present coming into May I'm expecting at the very least a wood sandpiper there and am really holding out for something much rarer. We shall see!