Gripped off on my own Patch

Weekends are always difficult for me. As a family man I tend to be doing family stuff at the weekend whereas during the week, as I work for myself, I am more able to get out and about birding. The trouble is it's the other way round for most birders which tends to mean that more birders are out and about at the weekend and so new birds are often found then which is rather frustrating for me. This Saturday was a case in point: we were driving around en famille in deepest darkest Buckinghamshire, about to pick up my younger daughter B from a party when I got a phone call from the Wickster which started along the lines of "what do you think is at Port Meadow at the moment?", "Err, probably some black-tailed godwits" I replied. However, it turned out that Tom was actually imparting rather than seeking knowledge and that someone (Tony Edwards to be specific) had found a spoonbill on the floods there. Now I've been religiously visiting the Meadow twice a day for the last few weeks as I could feel it in my bones that something good was going to turn up. I'd dutifully checked the Meadow that morning (no spoonbill then) but wouldn't you know it, the patch rarity of the spring passage turns up on the one day when I was miles away! The party pick-up dragged on (we had to stay for a while for a chat with the hostess) and all the while I was getting texts from various birders wanting to know what was going on with the spoonbill. Finally about an hour later we make it home and I get my gear together and rush down to the floods to find various birders hanging out there who inform me that the spoonbill left ten minutes ago. Rather gripping and on my own patch too! I wandered around in the rain a bit in case it came back (it didn't) and did a bit of half hearted photography instead. 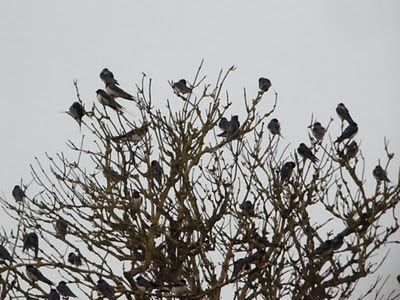 These swallows all congregating in a tree during the heavy rain were all I could manage by way of photographic consolation for missing the spoonbill
After I'd got over the disappointment, I was actually rather pleased that the patch had managed to turn up a decent rarity again as it had been a while. In fact the last good bird had been another spoonbill, in May last year, though that one had only stayed for long enough for me to see it before it flew off. I have a mental Meadow target (which I may have mentioned before) of wanting to have at least one decent bird in each half of the year. Since I took up birding again in the autumn of 2007 the list for the Meadow is as follows:

So the second half of '09 is rather letting the side down though in fairness the floods had completely dried up by then so there was no water for the autumn passage. At least with this latest spoonbill the first half of '10 is now secured.

Farmoor in the Wind
With the weather forecast for Sunday promising wind and rain I thought that a trip down to Farmoor would be in order - Farmoor tends to get good birds in poor weather. I first nipped in at the Meadow where there were several grounded birds: a turnstone (county year tick), a wheatear (patch year tick) a flighty dunlin and three little-ringed plovers. With such a good start I headed to Farmoor with high hopes where I met up with several other local birders. The weather was suitably grim and very windy though strangely calm in certain parts of the reservoir though we couldn't work out where the shelter was coming from. We started by trying to work out whether a couple of distant terns were arctics or commons. I though the former and at least one other member of our party agreed. There were lots of swirundines about (a new word that I've created to encompass swifts and hirundines) hawking low over the water when suddenly a hobby was in amongst them chasing this way and that as they scattered, leaving the reservoir suddenly empty. I was keen to find a red-rumped amongst the swallows or an alpine amongst the swifts and gave them all a good grilling but of course to no avail. In fact the only birds of interest that we saw along the causeway were one dunlin, a yellow and a white wagtail. We sought shelter in the hide at the west end where we had another look at the terns. The two that we could see now looked like commons so I jokingly invoked the four bird theory. Someone else who had been to the reservoir that morning had claimed arctic and Dai John did see a couple that day but it remains "unproven" on my year list. On the way back I lingered behind the others, looking for my elusive rare swirundine but again without luck. The others sped off to Otmoor to look for a pair of common cranes which had come up on the pager but I had family duties to attend to and had already seen a pair this year at Farmoor so went back home. 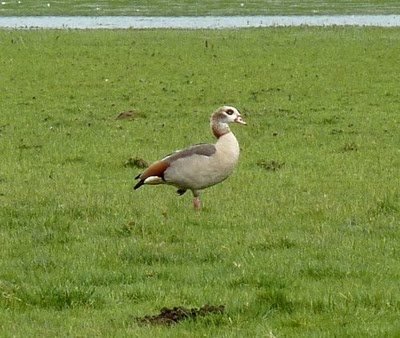 On my recent Otmoor visit I didn't managed to see the Egyptian goose that was there so I was pleased when one turned up on Port Meadow a few days later. This shot shows my typical tendency to over-sharpen my photos but as I only do digiscoping or long distance point & shoot camera work (as with this bird) the main issue is in getting rid of blurriness so I usually settle for the surreal over-sharp look instead. 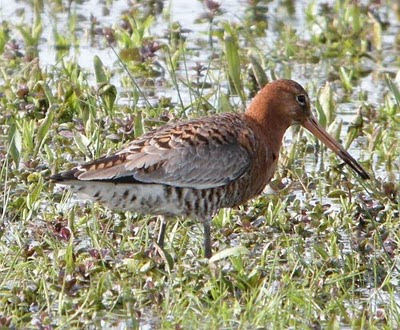 Five black-tailed godwits have been about the only waders around on the floods at present so I've been taking lots of photos of them. I finally managed to get off a decent digiscoped shot of one of them.
Just a few ticks to add to the year lists.