Three county birds to record in this quick update. Those of you who follow the Port Meadow Birding blog will already know about two of them so sorry for the repetition.
First I had a bar-tailed godwit which spent a couple of days on the Meadow at the start of the week. Regular county birders will know that barwit is actually a comparative rarity compared to blackwit and there are usually only one or two usually brief sightings in the year within the county so to have one stay a couple of days on my patch was nice. The weather was atrocious whilst it was there so the photographs were pretty abysmal though I did end up with one acceptable videograb. 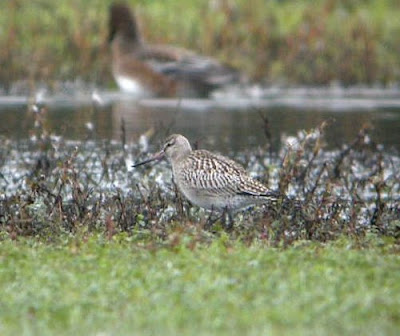 The second local bird of note was a rock pipit on my local patch. Now rock pipit is seen annually in small numbers usually just at Farmoor reservoir so I was over the moon to find one on the patch as it's not really suitable habitat. The last one that I know of was in the autumn of 2007 (when I took up birding again) and I didn't see that one so this was a patch lifer for me. It coincided with a couple of birds at Farmoor and there have been a few more in the subsequent days so there's clearly a passage occurring just now.
The third bird is the Witney dipper. This was discovered about a month ago on the river Windrush by a dog walker and gradually the news filtered out to the birding community. It initially proved very hard to see but the last week most of the county's hardcore birders have managed to connect as it started to appear more regularly at its favoured weir. I made a brief attempt at the start of the week but spent no more than an hour and a half on site. This was seriously light-weight compared to the keenest county listers who were putting in 19 hours or more before they managed to see it. Whilst they had huge county list totals to defend my paltry total is so small that I wasn't sure whether I was keen enough to be willing to put in those sort of hours. However, during the week more and more birders were managing to connect and it seemed to be getting easier. There were a couple of blank days when no one saw it all day but on other days it was around all day so I theorised that the best tactic was to wait until it was seen in the morning and then try for it that same day. Come Sunday and I was able to put this theory into practice when it had been seen all morning by a couple of county birders. My VLW wanted a rest in the afternoon so I had L to entertain and I decided that he would be keen to go for a little walk along the Windrush and that's indeed what we did. Fortunately the bird was there by the weir as soon as we arrived so I took a couple of distant shots with my point & shoot camera and then took L off for a walk. We ended up spending most of the time playing in the side stream near the stepping stones which L thoroughly enjoyed so we both returned home very pleased with our afternoon's outing. 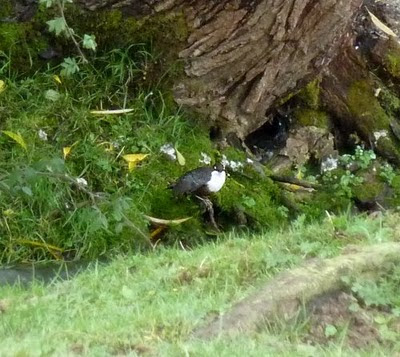 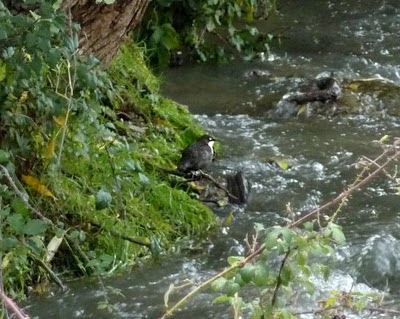 These are pretty lousy shots even by my standards but I didn't want to get too close and risk flushing the bird and with L in tow I didn't really want to hang around waiting for a decent photo opportunity. The only thing that I'd say in its favour is that its simple black and white colouring responds quite well to sharpening which means that these shots looked even worse before I started working on them! Anyway, it was great to catch up with such a delightful bird.and I really hope that it sticks around for a while. For some much better shots I recommend having a look at the new Oxon Bird Log.
Posted by Adam Hartley (Gnome) at 17:49