Early on Wednesday evening news came through on Bird Guides of a Wilson's phalarope in Gloucestershire. What particularly caught my eye was the relative proximity of the bird, it being at Dowdeswell reservoir which is just before Cheltenham on the A40 and somewhere that I've driven past on a number of occasions. When it was being reported as still present the next day it seemed rude not to go and pay my respects to a genuine "rare". I asked my VLW whether she fancied going shopping in Cheltenham and it turned out she did, so mid morning we set off along the A40. As we passed the reservoir there were loads of cars parked up in the laybys at either end which was an encouraging sign.

I dropped Mrs. Gnome of in Cheltenham town centre and sped back to the reservoir. As I was setting off I met a returning birder from whom I got detailed instructions. It involved a bit of a trek along a muddy track and then fighting one's way through some scrub to get down to the shore line but some fifteen minutes later there I was with only half a dozen other birders: I couldn't quite match that up to the number of cars that I'd seen unless the others had all got lost in the woods. Anyway, the bird was showing on and off about 100 yards away at the head of the reservoir where it was picking its way over the mud. Whilst it seemed relatively settled, periodically it would suddenly look up and freeze as if it were about to take flight, before resuming its feeding. It would often be obscured by some reeds from where we were standing and some birders were resorting actually to standing in the water in order to get a better angle but the bird would come out often enough for everyone to get a view. Of course I had a go at digiscoping it and given the difficult circumstances I was rather pleased with how they came out. 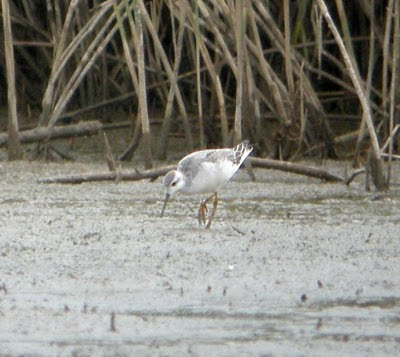 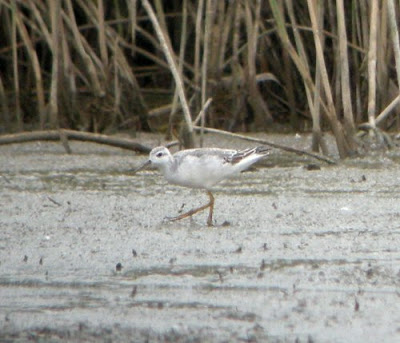 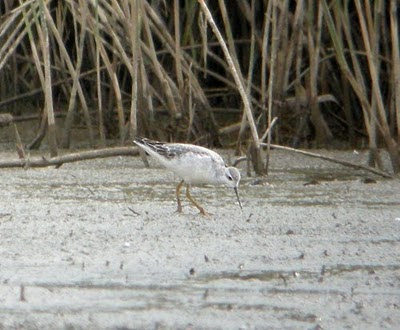 Given the distance and the overcast light these were the best digiscoped
shots that I could managed. Actually I'm really pleased with how well they
came out which just shows how difficult a shot it actually was.
After a while I checked in on my VLW who'd had enough of Cheltenham already so I went back to pick her up and we headed back to Oxford, stopping off on the way for cup of tea and some cake (well, why not!). A very nice bird that was conveniently close to get to though a shame that the views were somewhat distant.
Posted by Adam Hartley (Gnome) at 16:17