The combination of the Christmas festivities and the weather has meant that I've not been out much recently. I've trudged across the snow to the frozen river Thames to check the largely birdless desert that is currently my Port Meadow patch but apart from that I've not really ventured out much. Because of the harsh weather I've been feeding the birds religiously and as a consequence have been getting many more visitors to the garden. The most interesting displaced bird was probably a meadow pipit actually down on the ground (as opposed to flying over which I've had before). A couple of male blackcaps and a fieldfare have also put in an appearance so there's always been something to look at. About a week ago I spotted a jackdaw that came down to my makeshift table which is a large flower pot tray nailed to the top of the trellis so as to be out of the way of the cats. What was noticeable about it was that it seemed to have a well marked pale neck collar. Having studied my Collins bird guide I knew that this could mean a Nordic jackdaw but the bird flew off before I could get any sort of shot. I tried to re-locate it and spent some time poking my head out of the velux windows at the top of the house in order to survey the local jackdaw population. After a while I spotted the bird on the chimney pots a couple of houses down. With a bit of acrobatics, I leant out of the velux with a hand-held scope and digiscope camera combination and managed to come up with a shot. 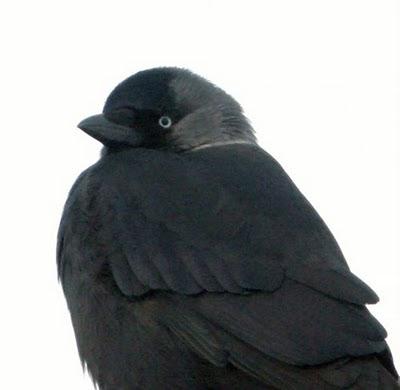 A nice close-up taken using hand-held digiscoping equipment whilst
dangling out of the Velux window looking at the neighbour's roof!
I sent the shot to Ian Lewington (our esteemed county recorder) who was intrigued but said that one had to be careful because at that angle the base of the neck area can be somewhat exaggerated and would it be possible for me to get some eye-level shots instead. I wondered just whether I was actually going to see the bird again at all let alone get some more shots but as luck would have it it's visited the garden at least once on each subsequent day and today it actually stayed put on the bird table for quite some time so that I was able to get off a good load of shots and to see the bird from various different angles. I also took some photos of a normal jackdaw which pitched up a few minutes later by way of comparison under the same lighting conditions. 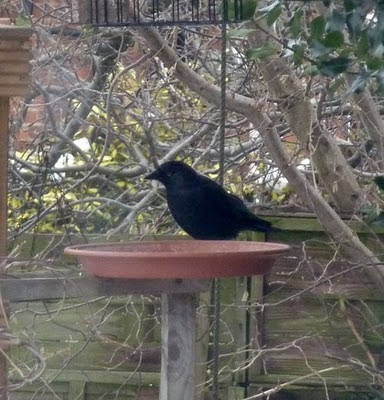 This is a normal jackdaw... 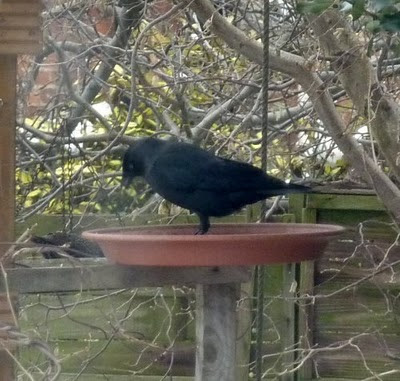 normal jackdaw: note how at certain angles there can be a hint of a collar surrounding the base of the neck, caused by the light catching the end of the neck feathers.

The rest of the shots are all of the candidate bird. Note that there's no doubt about the fact that the pale area is more than just catching the light at a certain angle. 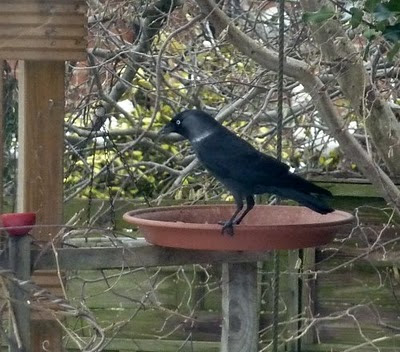 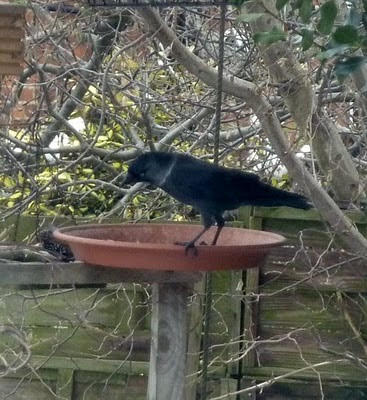 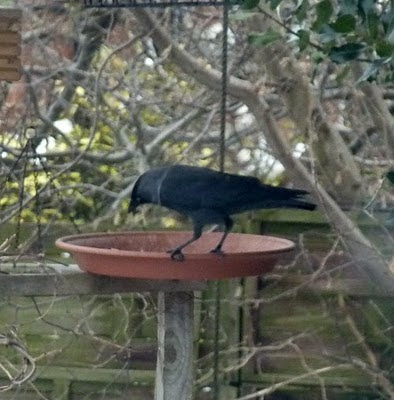 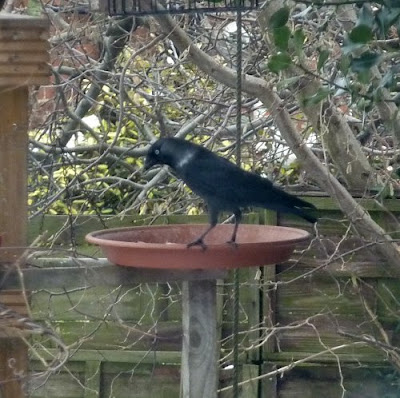 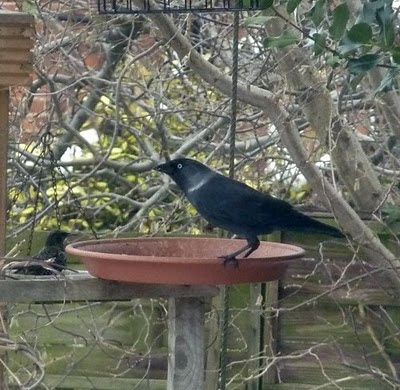 Although you can't see it from these photos I can confirm that the neck pattern is the same on the other side so that it's not just some aberrant feathers on one side but rather a consistent pattern on both sides of the neck.
If I've interpreted my Collins correctly, the jackdaw (corvus monedula) that we get normally get in the UK is c. m. spermologus. In Finland, Russia and E. Europe it's c. m. soemmerringii which has a distinct pale half collar going all the way around the back of the neck. Scandinavian birds (known as Nordic jackdaws) c. m. monedula are described as somewhat intermediate which would fit this bird as it has a distinct collar but it doesn't go all the way around the back of the neck, being confined to the sides of the neck. Ian Lewington helpfully sent me a link to some Nordic jackdaw shots which shows the wide variation within this sub-species and my bird certainly would fall within the range shown and some of the plates there show the identical side collar markings. After chatting with Ian Lewington it seems that it can certainly at least be claimed as a bird "showing the characteristics of Nordic jackdaw". A very nice garden find!
Posted by Adam Hartley (Gnome) at 18:50