It has seemed as though every part of the country apart from Oxfordshire has been swamped by waxwings this season. Within the county there had been a few tantalising fly-over glimpses and recently a pair had spent the morning in the farthest reaches of the county before being flushed by a sparrowhawk. So when I got a text from Nic Hallam saying that there was a waxwing in Botley it was too good to resist and despite the cold weather I set off and soon managed to connect. The bird was feeding on berries next to the church hall in Botley, Oxford though whilst I was there it spent most of its time at the top of a tall tree on the opposite side of the road, only making brief sorties across to the berries, gulping down a few before returning to its lofty vantage point. I took a few digiscoped shots whilst it was in the tall tree and eventually worked out that to get any shots whilst it was on a berry sortie I would have to be very quick so in the end I opted for shooting some video during the berry raid. Let's hope that it stays and even that it's joined by some friends, they're such lovely birds! 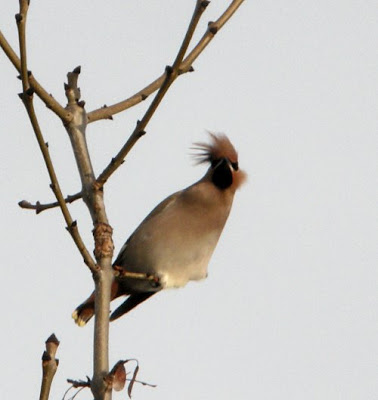 Having a bad hair day! 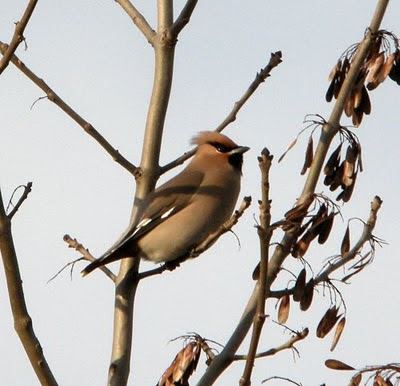 In it's tall tree, waiting to make a dash over the road to the berries 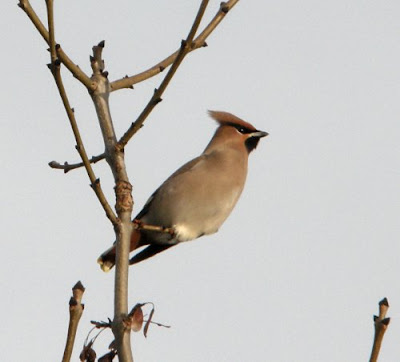 At last showing without a bunch of twigs in the way

Some rather shaky video footage whilst it was on a berry raid.
Posted by Adam Hartley (Gnome) at 12:39