I thought that I knew redpolls: the brown ones are lessers, the frosty ones with a whitish rump are mealies and the really white ones with a very white rump are arctics. Turns out, that's far too simplistic. My knowledge of and confusion about redpolls has increased in leaps and bounds since yesterday. Here's how it happened....
On Monday evening Ian Lewington (our esteemed County Recorder for non-county readers) posted an entry on the very popular Oxon Birding Log saying that someone had got in touch with some photos of a very pale redpoll (blog entry here). He'd gone to see it and it was a cracking mealy but right at the top (arctic) end of the spectrum. Now I still needed mealy redpoll for my county list but when I read that it was appearing occasionally for a few minutes every few hours I wasn't over enthusiastic despite the potential county tick. I'd also been out birding for most of the previous afternoon and felt that I really needed to do some work so I didn't do anything about it on Tuesday. However on Wednesday after having done a good bout of work the previous day I felt that I probably could afford to waste a few hours staring at an empty nyger feeder in the cold. I had to stop pick up something from my accountant in that direction anyway so it was justification enough to set off. It was a bit of a trek out to Milcombe from Oxford and it was after 11am by the time I'd actually turned up.
The feeders were conveniently located in the corner of a garden which bordered a paddock through which a public footpath ran so it was easy to see them. There were three large and wells-stocked feeders to which a variety of birds were coming and going. I'd only been watching a short while when all the birds went up suddenly into the trees. I looked up expecting to see a sparrowhawk but instead I found the shape of a small fast falcon zooming off: a merlin - very nice! After a short while I was joined by a couple of birders who were also looking for the redpoll though they'd not know exactly where to look and had been touring the entire village. They reported that there were lots of feeders around in the village gardens which I suppose meant that the target bird could be going to some other feeder for hours at a time. Shortly after that I heard a redpoll trilling from behind us and soon after our first redpoll arrived on the feeders. It clearly wasn't the frosty mealy we were looking for but to pass the time I took some photos. Redpolls would come and go from the garden, often seeming to spend some time on the ground out of sight but there was never any sign of the "super-mealy". At one stage there were four redpolls at the feeders and I took a bit of video as a memento. There were some nice other birds around as well: a great spotted woodpecker turned up, and yellowhammer and a tree creeper both put in an appearance.

Some video of four redpolls at the feeder

Because there was always something to look at I found that I actually rather enjoyed the two hours I'd given myself before I packed up and left. With no sign of the bird I'd seen in the photos I'd clearly dipped but I'd been half expecting that anyway. I drove back home and spent the afternoon slaving over a hot computer before posting my video and photo on the Oxon Bird Log and the OOS site respectively, mainly just to add a bit of colour to the blog.

A redpoll photo that I took to pass the time
Later that evening I was browsing Martin Garner's excellent Birding Frontiers web-site: Martin is very hot on redpolls and has done a lot of posts on them recently. His latest posting was on "Brown Mealies" and this started to get me confused: surely that was a contradiction in terms, I thought. Anyway I started to look at my photo and wondered whether I could string what was evidently a pale bird but with no hint of frosting on its back, into a mealy. I decided that even I couldn't do that (especially since I'd posted the photos in public) and left it at that. Later on however it conspired that both Ian Lewington and Nic Hallam (for non-county birders: top birder who runs the Farmoor Birding blog and is a member of the BBRC ) thought that the top right-hand bird in my video was a mealy redpoll and also that the pale bird in my photo was another one! Ian even composed a composite photo comparing my photo bird with a photo he'd dug out of a Finnish mealy redpoll in breeding plumage and the match was pretty good. All this meant that I'd got my county tick after all but that I also needed to re-evaluate my understanding of redpolls. 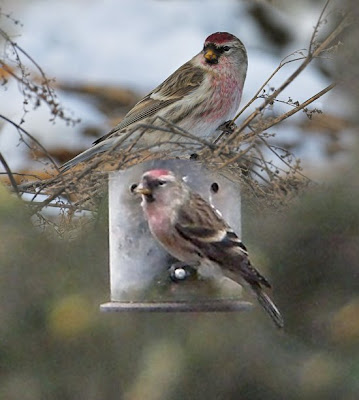 Composite photo from Ian Lewington showing a Finnish mealy above and my bird below.
So where does this leave my redpoll identification skill? Firstly I have learnt that redpolls are the gulls of the passerine world: they are very tricky and varible and, like gulls, there are some birds that you just have to walk away from. It also seems to be more of a continuum or cline and it is somewhat arbitrary where you draw the line. Nevertheless here's my idiot's guide to redpolls as I understand them:
Lesser redpoll
1. The small brown ones. Basically buffy brown wash to them all over
2. Comparatively short winged and small (smaller than a goldfinch)
3. Rump streaked with buffy brown basal colour
4. When in breeding plumage the breast colour is reddish (not pinkish).

Mealy redpoll
1. The larger whiter ones. A whiter basal colouring, your classic one being "frosted" though they can be remarkably brown as my birds are
2. Comparatively long winged and larger (comparable to a goldfinch in size)
3. Streaked rump with white basal colour
4. When in breeding plumage the breast colour is pinkish (not reddish)

Arctic redpoll
1. Large and very white.
2. The bill is very small: it looks like it's been punched in the face
3. Pure white rump

The rump seems to be a pretty important part of the ID and a good rump can trump some otherwise slightly dodgy other criteria. Note that this is over-simplified: there are actually two types of common redpoll: mealy and Greenland and two types of arctic: Hornmanns & Coues. For now this is my level of understanding though I dare say I'll have to look into it further in due course. All I can say is that I now want to go back and spend more time looking at redpolls in all their great variety. I could get as addicted to them as I am to gulls! 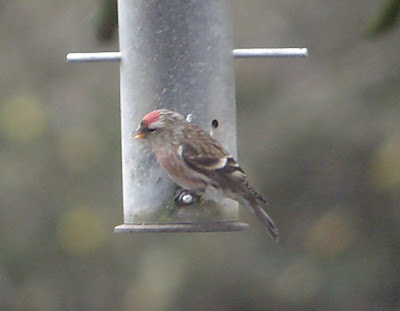 Another photo of one of my mealies: note the pink on the breast (not red) the white basal colour for the head and neck and pale streaking (perhaps a hint of frosting) on what is still a rather brown back.
Posted by Adam Hartley (Gnome) at 12:37