It's been a good winter for birds in my garden. I've been posting my garden sightings on my Port Meadow Birding blog since I increased the area which the blog covers but apart from that I'd not really given it much thought. However various people started asking about whether I'd had any more good birds in the garden recently and that got my thinking about it and I realised that I've had all of the winter visitors that one might possibly expect with one exception. Below is a summary of what I've seen over the winter so far. I apologise in advance for the poor quality of the photos but they are all shot through my home office window which looks out onto the garden and as the window is locked shut I can't easily clean the outside which is rather grubby.
I have a number of feeders up in the garden: nyger for the goldfinches, sunflower hearts for the finches and tits, peanuts for the tits, fat balls which the starlings enjoy and half apples impaled on spikes for the thrushes. All the feeders now have squirrel cages on as otherwise a pesky local comes and empties them pretty quickly. Goldfinches are daily visitors and in fact I often get a flock of about twenty of them roosting in the tall evergreen tree that we have in the middle of the garden. We regularly get redwings in the garden, especially at the start of the season when there are lots of holly berries still on our tree though the wood pigeons soon demolish these. During the cold spell we've had fieldfares come in as well and up to four blackbirds all fighting over the apples. One of the biggest surprises during the prolonged snowy period was a poor meadow pipit on the ground at the back of the garden briefly. A male blackcap came into the garden a while ago, took a liking to the apples in particular and has never left. He's even become quite aggressive, chasing other birds off the feeders (though not the greenfinches which are too big). Now that there's at least a hint of spring in the air he's started singing and it's been wonderful to hear his warblings so early in the year. 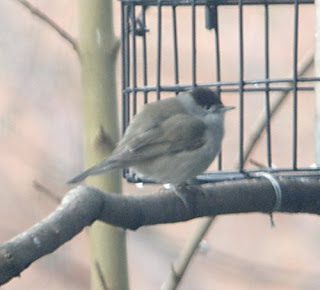 A rather blurry shot of my resident blackcap
The jackdaw "showing characteristics of the Nordic race", whom I have christened Norbert is still visiting the garden fairly regularly. I got an e-mail from someone local saying that his father had seen a jackdaw with a collar a couple of years ago in a nearby street. This and the fact that I think I saw Norbert about a year ago in the garden all points to the fact that he's not a vagrant from Scandinavia, forced over by the harsh December weather but either he came over some time ago and decided to settle or his collar is some genetic throw-back to past Nordic influences. Anyway it's always nice to see him when he turns up with his fellow jackdaw chums to raid the bird table.

Norbert at the fat balls
One of the birds that I got most excited about was a brambling which turned up for a couple of days. I find brambling a remarkably hard bird to see in the county: there isn't an obvious site for them and it's usually just occasional reports from random gardens or fields so when I spotted one hanging around the feeders I was very pleased. Unfortunately he didn't stick around. 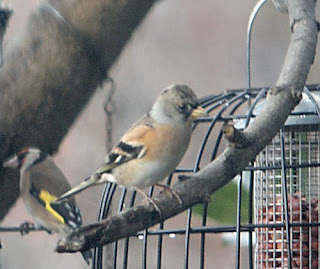 my brambling visitor
I've had a couple of visits by siskins this winter, including a flock of three on the nyger seed recently. It's generally much easier to see siskins "on demand" in the county and there are sites where they can be more or less guaranteed but it's always a pleasure to see these dainty little finches.

The siskins at the nyger

The ultimate winter garden tick has to be waxwing. There have been a few waxwings kicking around my local area and I'd even had a flock of five fly over the garden trilling so they were on my garden list but the other day I spotted one actually sitting in our pear tree not 10 yards from my home office window. He was obviously feeding somewhere close by and then coming to rest in the garden and I saw him three times that day for reasonably extended periods of time though sadly he didn't return. 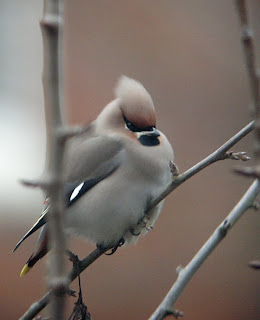 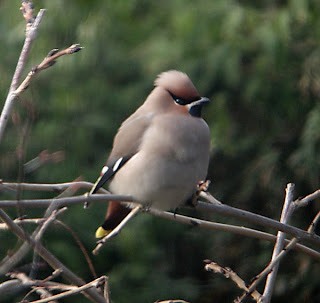 A couple of waxwing shots.
And the one winter visitor that I haven't had? The answer is redpoll. I'm still hoping for one on my nyger: I have had them in previous years and there's still time. With my new-found interest in redpolls I might even be able to spot a subtle mealy in amongst the lessers should one turn up and I've been reliably told that there's a good chance of a last gasp redpoll invasion in the county in March.
Posted by Adam Hartley (Gnome) at 09:01