A Duck & A Buzzard

A Duck
There's been a drake American wigeon at Rushy Common for some time now. As I already had it for the county I have not been in that much of a hurry to see it but made a note to try and pay it a visit when it was convenient. A while ago we were heading out on a Sunday en famille to Burford and I suggested the scenic route which went past Rushy Common. I managed to persuade the family to let me stop off for a short time to take a quick look and I legged it down the bridleway looking for the duck which was usually frequenting one of the two pools to the right of the path. Viewing was severely restricted (peering through a hedge) for the most part. I did find a small flock of wigeon but there were not Americans hidden amongst them and given that I had limited time I had to head back to the car defeated.
This dip naturally piqued my interest some more so on next day I came out again on my own and spent some time carefully scanning the bridleway pools but still without any luck. After some time I headed back to the car and decided on a quick scan of the main Rushy Common pit itself. There seemed to be something going on at the hide and a committee of three people were walking along the entire perimeter of the pit with clip boards in hand. As they got to the southern end they of course flushed all the grazing wigeon from the grass onto the water and low and behold, there was the drake American. Before you could say "digiscope that duck!" the committee of flushers had continued around the corner and had managed to put the entire flock up in to the air where they circled for some time with some of them peeling off to head off to other pools. At this point I decided that I couldn't wait any longer and headed back home with a nice year tick in my pocket but sadly no photos to show for it.
A Buzzard
The county birding scene has been agog with excitement when Roger Wyatt managed to turn up a juvenile rough-legged buzzard on his patch on the downs. Not only that but he'd obtained some fantastic photos of the bird which he has been kind enough to allow me to use on this blog (which is just as well as I wasn't able to take a single shot). The next day anyone who was serious about their county list was out on the downs and even I, very much a fair weather lister, decided to go for a run in that area so that I could get my exercise and could cover a lot of ground at the same time. Of course it turned out to be thick fog and it was an entirely frustrating exercise wandering around in the gloom with no raptors to speak of at all. I met up with Badger, Paul Wren and John Prowse who were camped out on what would on brighter days have been a good viewpoint. I decided to keep on running (it was too cold to keep still) and managed to run all the way along the Fair Mile to the Cholsey end where I did finally see some buzzards, albeit common ones. On the way back I did get excited when I spotted a distant pale buzzard-shaped blob on a post but as I only had my bins it was hard to tell what it might be, but a phone call to Ian Lewington revealed that a very pale buzzard often sat on the exact post in question and I could tell enough to see that this bird had a pale belly and was not therefore the bird I was looking for. Meanwhile Badger & co. had managed to see a good candidate for the bird but in the fog weren't able to get that clinching view. I headed back for home, leaving the others to their vigil. By the afternoon apparently the fog finally lifted and the people there all got to see the bird a couple of times including Badger's team who had stayed there the whole time - their dedication to the cause puts me to shame! 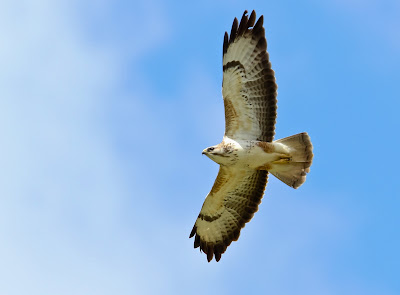 The pale common buzzard imposter (c) Roger Wyatt.
Note the lack of dark belly
Needless to say, this dip of what is a county mega hurt somewhat so the next day I headed back to the downs shortly after lunch where there were several other birders dotted around the downs. I elected to stand near the head of a valley with a couple of county veterans, Pete Allen & Brian Shaw. The weather was lovely and warm in contrast to yesterday and what seemed like the entire common buzzard population on the downs was using the opportunity to practise some thermaling. It was very pleasant in the warmth to hear the yellowhammers singing and to watch the distance soaring raptors, including a lone sparrowhawk. After about an hour my two companions decided to call it a day leaving me to continue the watch on my own. Their parting remark was that no doubt it would turn up as soon as they left but I was rather thinking that they weren't going to miss much. However, some twenty minutes later I suddenly spotted a couple of birds flying low up the valley so that they were actually below me as I watched them. The second bird was one of the ubiquitous red kites but the first was clearly a buzzard and what's more it had a striking set of pale feathers around the head. Added to that it clearly had a dark belly so couldn't be the resident pale buzzard. By now I was very excited as I watched it fly away from me being harried by the kite constantly. It tried to land on a fence post across the valley and as it did so I was able to see the white tail with the thick well-defined black terminal band - bingo! Unfortunately at that point I made a bit of a school boy error and took my eye off the bird in order to reach for my phone and make a call to report where the bird was. When I looked up I expected to see it still flying over the fields in the direction that it had been heading but there was no sign of it. I can only think that it must have doubled back to escape the attentions of the kite and this was born out by a report of it hovering over Unhill Wood a short time later. From the various reports, it seemed to hang out between Unhill wood, along the Fair Mile and at the valley where I was. The bird was subsequently seen several times over the weekend but then took advantage of the hot weather to soar off to the north on Sunday morning leaving some county birders rather frustrated in not having seen it. 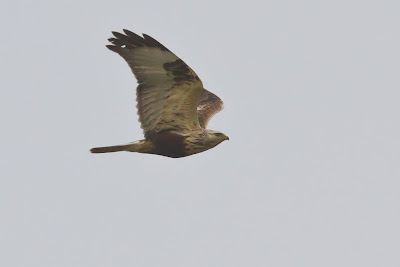 The juvenile rough-legged buzzard in flight (c) Roger Wyatt
As well as the dark carpal patches you can see the very pale
feathering around the head contrasting with the dark belly . 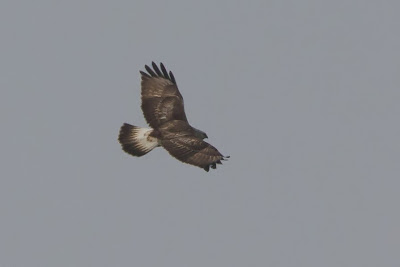 The diagnostic black terminal band on a white tail (c) Roger Wyatt
I waited around to see if it would show again but to no avail. It had been a rather brief encounter with a most interesting raptor and I would have loved to have got some longer views and indeed some photos of my own though of course they would have been no comparison to Roger's fantastic shots - thanks once again for their use, Roger!
Posted by Adam Hartley (Gnome) at 15:00