Introduction
It was time to sally forth once more to do more work on the house in Cornwall. I was going to be heading down on Monday with my younger daughter B and my brother in law was coming down for a few days to lend a hand. On the Friday my VLW and our son L would come down to join us on the train before we all would leave on the following Tuesday. During this rather long stint we were ideally hoping to finish off all the painting as well as assembling the beds and taking delivery of a number of items. Naturally I'd been keeping track of the bird sightings down there in the days leading up to my arrival and there'd been a few hoopoes around but it had all turned rather ominously quiet just before I was due to head down so I was not overly optimistic as we set off on the long journey but at least it would be a chance to spend some more time in my favourite part of the country and there would always be some more birds to add to my Cornish list.
Monday 4th April
At my suggestion we decided to stop off at a couple of places en route, partly to break up the journey and partly as I quite enjoy getting to know other parts of the county than the Penwith peninsula. The first port of call was Kit Hill where a great grey shrike (not at all common in Cornwall) had been hanging out though it had not been reported for a couple of days and I was not particularly optimistic. We arrived to find it blowing a gale so we ate our sandwiches in the car and had a quick yomp around the summit though in the conditions the birds were sensibly keeping their heads well down and I saw nothing. B was singularly unimpressed with this first stop-off and re-named it Shit Hill.
Next stop was Golitha Falls which proved to be much more successful. This is a beautiful wooded valley through which the crystal clear river Fowey runs. We could see bluebells getting ready to flower and I can imagine that once they are out it must be absolutely stunning but even B was most impressed with this spot. I had originally learnt about it as a good place for catching up with nuthatch and tree creeper in the county and sure enough within a couple of minute of arriving there was a nuthatch piping away in a tree a few yards from the car park. During our visit I didn't manage to see a tree creeper though I was secretly rather glad about this as it would mean that I would have to visit this fantastic spot again. 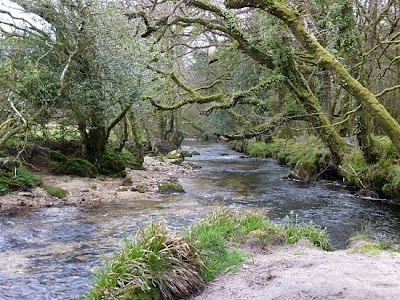 Golitha Falls
We sped on towards our destination and arrived in good time to buy some food for our stay and to boot up the cottage and get settled in.
Tuesday 5th April
There was one bird which had been lingering for some time in Cornwall which I still needed for the Cornish list which was ring-necked duck. I'd missed the one at St. Gothian but I'd noticed that the Stithians bird whose appearance had been rather erratic, had been reported regularly for a number of days so the next morning I got up early and drove over to Stithians reservoir. This time I made it straight to the southern causeway without getting lost as I'd done on my previous visit. As I pulled up a couple of sand martins were hawking low over the water, battling against the reasonably strong wind. I made my way to the hide and had a good scan but apart from a couple of teal and a few coots and moorhens it all appeared rather quiet. Rather than hanging about in the hide I decided to take a walk along the causeway and almost as soon as I did this a number of tufted ducks swam out from close into the bank and in amongst them was the drake ring-necked duck, looking very smart indeed. I spent a little time taking some digiscoped video from both the causeway and back in the hide but I didn't have too long before I had to be back at the cottage ready to start the decorating so the results were somewhat rushed and were little more than record shots. Still I was pleased finally to have caught up with this handsome duck 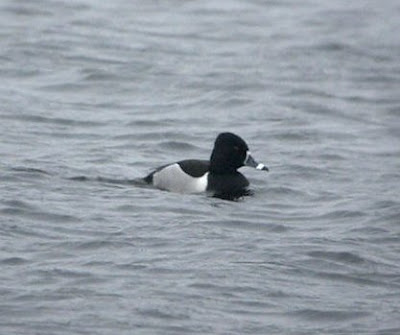 The Stithians ring-necked duck
Later that day after we'd all had enough of painting we headed over to Marazion for a stroll along the beach and to see if we could score a cream tea somewhere. On the way I was able to pick out a few sandwich terns hunting over Mounts Bay - a Cornish tick for me.
Wednesday 6th April
Once again I was adopting my tactics of getting up early to get some birding in before a hard day's decorating. With nothing particular about to go for I decided that I would have to try to find something for myself so I elected to head over to Kenidjack and Cot to work the valleys. It was a new experience for me to visit these places in the spring: usually I was there in the autumn or winter when it was rather quiet but today they were alive with singing birds. There was nothing out of the ordinary but there were plenty of willow warblers and chiffies to look through just in case there was something rarer hidden in amongst them. After a while of fruitless searching I headed back to the cottage to start the decorating.
Whilst putting paint on the walls later that morning, I got a Bird Guides text through saying that a gull-billed tern had been seen as a fly-over down at Sennen. Intrigued but dismissing it as untwitchable, I carried on working until a short while later I received a phone call from Dave Parker saying that he was watching the gull-billed tern in the first field south of the Sea View caravan park in Sennen. Wasting no time I dropped everything and sped off in the car, not even bothering to change out of my painting clothes. It takes about 15 minutes to get to Sennen along the rather winding roads from Pendeen and of course there were the slow-moving tourists' cars to get stuck behind but I eventually arrived to find a bunch of local birders all staring into a field which was an encouraging sign! Sure enough the bird was still there with a dozen or so herring gulls loafing in a field - not the usual place to find a tern but I wasn't complaining. I took the obligatory record shots though it was rather hazy so they're nothing special at all. 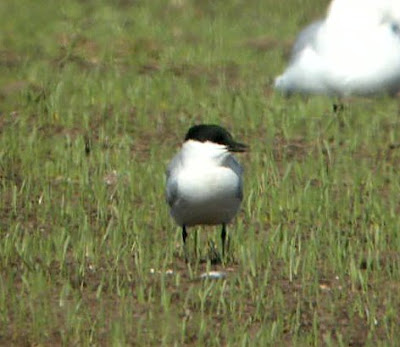 A digiscoped videograb of the gull-billed tern
Within about ten minutes of my arrival the bird took off and headed south so after thanking Dave for the prompt phone call I headed back to the decorating, very pleased with having made it there in time to connect with the bird. As it turned out however, the next few days it was seen on and off in a field nearby at Trevilly Farm so had I missed it I would have had some more chances to see it but had I not gone for it I would have been kicking myself if it had disappeared, never to be seen again. A great bird to catch up with in Cornwall!

The gull-billed tern, filmed a couple of days later at Trevilly Farm by John Chapple


Thursday 7th April
After a few days of hard decorating and with my brother-in-law due to depart later on today, we decided to make the best of the decent weather and to go for a longer walk. We also wanted to take advantage of having two cars so we parked one at our destination at Porthgwarra and the other at Trevilly Farm from where we set off to walk back to the PG. The sun was shining and the wind had dropped so it was all very pleasant. I'd brought my scope along with me and took advantage of the light to do some digiscoping of some of the birds that we encountered. There was nothing unusual to be seen but it was a very pleasant afternoon's walk 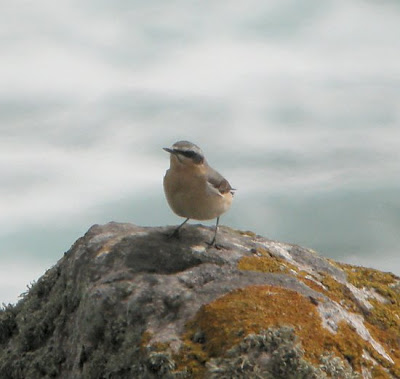 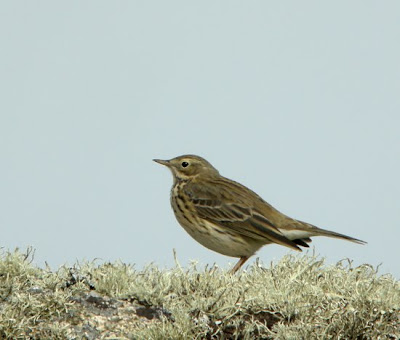 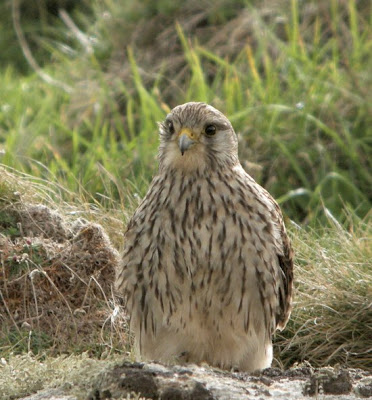 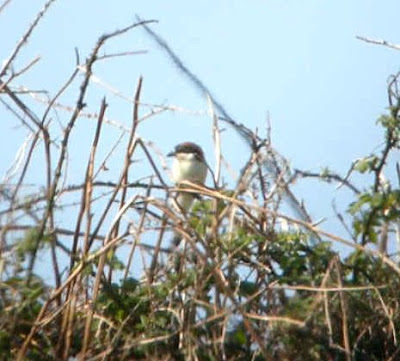 Some video footage of the subalpine warbler taken by John Chapple

Back from my twitch in good time, we decided to head over to St. Ives to take advantage of the good weather and I was happy to watch L as he paddled in the sea while my VLW did a spot of shopping. That evening I duly did my painting stint and each brush stroke was tinged with joy at another great Treve Common double!

Monday 11th April to Tuesday 13th
With not much about to go for the last couple of days were spent birding locally at Pendeen. It's been great getting to know the local birds with goldfinches, linnets, dunnocks and stonechats all to be seen in the bushes and gorse. As it had been so sunny I'd taken the opportunity to do some digiscoping during my breaks from painting. 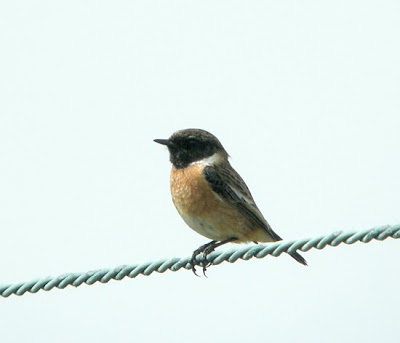 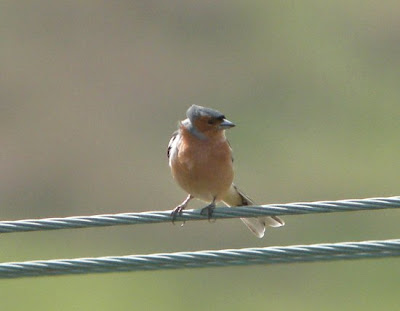 Pendeen chaffinch
One lunch-time I noticed that the wind had picked up and also that there seemed to be a lot of birds going through on the sea. Indeed I could even pick out some shearwaters going past from the cottage so I took half an hour off over lunch for a quick sea watch during which time 258 manx shearwaters and one bonxie went by. It's great to be able to nip down for a sea-watch "on spec" like that.
Tuesday morning was time to leave though I did persuade the family that we needed to stop off at Marazion for ten minutes as reed warblers had been reported there the previous day. Sure enough within a few minutes I managed to hear their monotonous chugging song - another Cornish first for me, albeit "heard only". After that it was off home, this time with the en route stop off chosen by my VLW who wanted to stop at Lostwithial to look in the many antique shops there. The journey back home was uneventful - it had been a great springtime visit to Cornwall and despite initially not looking too promising bird-wise, a few real cracking birds had been seen. I can't wait to get back down there and fortunately for me the decorating is taking longer than we'd hoped so I'll have to head back there fairly soon for some more great birding decorating.
Posted by Adam Hartley (Gnome) at 12:15