Just How Bad is June?

I was twiddling my thumbs waiting for someone decent bird action but of course, being June, there was precious little around. This got me wondering just how bad this month actually is compared to others. Now, messing around with numbers on computers is what I do for my day job so I thought that I could apply some of these skills to this important matter. In order to answer this question I started playing around with the Bird Guides database query functionality (yes I know I clearly have too much time on my hands). This is actually quite a cool tool in that you can search the entire Bird Guides database for sightings since they began in November 2000. I've come up with a simple yet effective way of measuring relative "performance" for various criteria such as counties or species which is to count all the first sightings within the database (to avoid multiple reports of the same bird) and there is a convenient tick box for this when doing the searches. This is slightly over-simplistic as it may count things like "no sign" or erroneous reports and if a bird moves location it will be counted as a separate record but on the whole it's going to give a rough idea of the relative counts. To illustrate what I mean and to answer my original question, below is a chart showing just how bad June is. This is a chart showing all "scarce or better" records for Oxfordshire by month since BG records began. 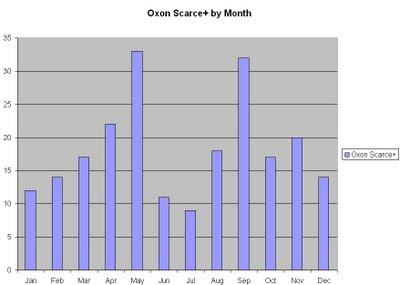 All scarce+ records for Oxon by month - click on image for larger view
From this I hope that you can make out that May and September are the best months for some hot scarce action but rather depressingly that July is even worse that June with only 9 scarce+ since 2001.
If you want to make some comparisons, then here are the June records for three counties. Oxon birders may want to look away now!

So Oxon basically gets about one scarce+ record a year in June though there hasn't been one yet this year at all. In answer to the question as to which county is better in June then you can say that Norfolk is nearly 30 times better than Oxon. That is depressing!
This tool is also good for determining the monthly distribution of various species. Now Oxon has sadly still not had a buff-breasted sandpiper so here's the monthly distribution which clearly shows that September is the month to look out for this dainty wader. 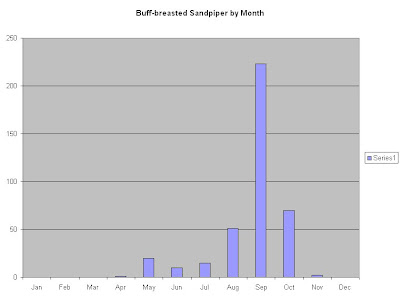 You can even use this tool to assign very rough probabilities for different species. Thus if you see a long-winged Nearctic sandpiper in September in the distance but you don't see it's rump then the chances are that it's a Baird's rather than a white-rumped by a ratio of a bit less than 2 to 1. However in October (though I've not shown the actual numbers) it's much more likely to be a white-rumped by a ratio of 4 to 1 as white-rumped's have their peak in that month rather than September.
In a similar vein, a phalarope species was seen very briefly on my patch at Port Meadow in April (whilst I was away down in Cornwall). The observer was pretty sure that it wasn't a grey and was tending towards Wilson's though it was distant and into the light so the view wasn't good.
Unfortunately April is not a good month for phalaropes and there are only seven different sightings since 2001 of which one was unidentified. The breakdown is as follows:
Grey: 3
Red-necked 2
Wilson's 1

Unfortunately there are too few records to be able to assign meaningful probabilities to this sighting. But the mere fact that phalaropes are so scarce in April shows that (stringing aside) it's an unusual record.
You can of course use this method to assess how good particular years were. I've had the belief that 2008 (when I did my county year listing challenge) was a particularly good year but do the statistics bear this out? 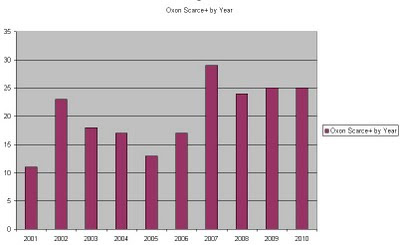 Well, as you can see from the graph, 2008 doesn't particularly stand out in recent years though there is a noticeable improvement from the first half of the decade. As you can see, for the last couple of years we've had 25 scarce+ events in the year. By way of comparison Norfolk had 545 in 2010. It makes you weep!

So where does this leave us? It confirms that June and July are tough months and that Norfolk is much much better than Oxon. Neither of these things are particularly great insights of course but one can assign actual numbers to these statements and it keeps me occupied as I wait for autumn. Next time I promise a post with some actual wildlife in!
Posted by Adam Hartley (Gnome) at 18:00