Spoonbill used to be a county rarity. Two years ago (2009) I found one on my patch (Port Meadow) though it flew off almost as soon as I saw it and before I could even take one of my famously blurry digiscoped record shots. I put the word out and the various county birder all went into a bit of a frenzy of excitement as they all needed it for their county lists - apparently the last county spoonbill had been more than ten years ago. My bird wasn't seen again though in August of that year a twitchable juvenile turned up at Otmoor thus satisfying the needs of the county birding fraternity.

Last year the same thing happened: a bird turned up for a few hours on Port Meadow in May (though I was out of the county and got back ten minutes after the bird flew off) and later on one turned up in August on Otmoor for a few days. This year we've already had a May fly-over at Otmoor, and on June 7th three turned up at the Drayton floods and on the same evening I found one on Port Meadow whilst doing my evening rounds checking out the patch. Naturally this bird didn't generate the same degree of excitement as the first one and only a few people bothered to come and see it. It just shows how quickly the rarity status of certain species can change. It's the same with great white egret which was a real rarity until a few years ago and is now probably more or less annual within the county. Global warming is probably to blame with warmer, wetter weather attracting various continental herons etc. across more and more. In fact we've recently had breeding cattle egrets, little bitterns and purple herons in the country for the first time so I expect that we can look forward to a lot more of these exotic birds over the coming years. I for one very much look forward to catching up with things like night heron and squacco heron on Otmoor some time in the near future!
Anyway, whilst spoonbills aren't what they used to be, I was still pleased to find it and I spent some time taking some digiscoped photos in the golden evening light.

Some video footage of the Port Meadow spoonbill 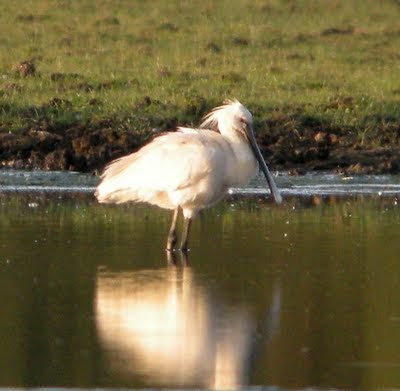 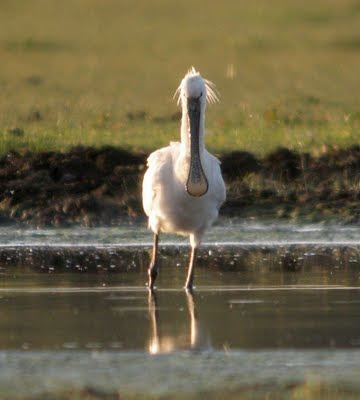 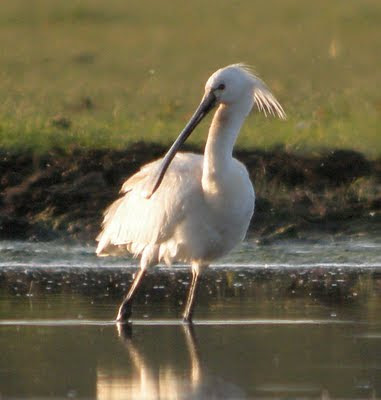 Some digiscoped spoonbill photos
Posted by Adam Hartley (Gnome) at 17:24