Getting Out and About Again

I feel a bit bereft at present: my lovely patch floods have all dried up and I don't really have the appetite to pop out there on a daily basis just to count the lapwings and yellow wagtails. I realise that I've been rather spoilt having such a great patch a few minutes walk from my door and because of this I've hardly visited any of the other county sites for quite a while so it was time I started getting out there once again. According to my research, things should be picking up in August now but besides a noticeable increase in passage waders, there hadn't actually been much to entice me out so I was just going to have to make the effort for myself.

As regular readers will know, through persistent visits to Port Meadow I have developed a penchant for gulls and waders so in order to pander to this preference I've decided to start making regular visits to Farmoor. At present Wednesday evening seem to be a good day for me as my VLW plays tennis on Tuesday and Thursday. Therefore last week I popped down to the concrete bowl after dinner where I passed a pleasant couple of hours in the company of Jeremy Dexter looking through the gull flock. The roost was still rather paltry though our esteemed County Recorder had picked out a cracking adult Caspian the previous week. We had no such luck ourselves though at the very least there were plenty of yellow-legged gulls to ogle and a flock of 5 common sandpipers fluttering around the place. 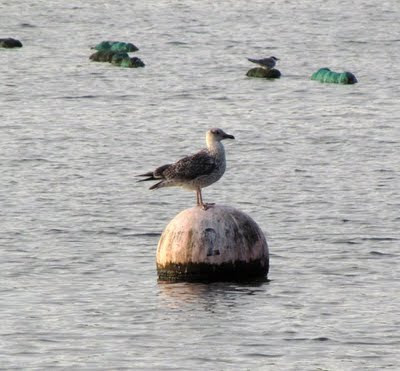 A juvenile yellow-legged gull, not a very close-up shot but
the photo belies the fact that it was nearly dark when I took
it so there was not much shutter speed to play with.

Further to my cause of getting out, yesterday I decided to go to Lardon Chase near Streatley (just over the border in Berks) to see if I could find any of the second brood Adonis Blues. Butterflies are a relatively new interest for me, acquired in order to pass the time during June and July so I was keen to see all the local specialities including this gorgeous blue. When I arrived some directions from a helpful National Trust man soon had me combing the steep south-facing chalk slopes and it wasn't long before I found a pair. There were plenty of Meadow Browns and one or two very tatty Common Blues and a little while later I found a couple more Adonis males. Their blue colour really is very striking when you see them "in the flesh". 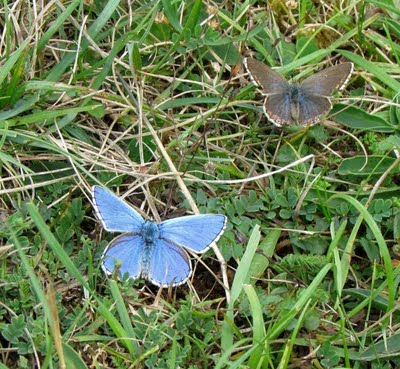 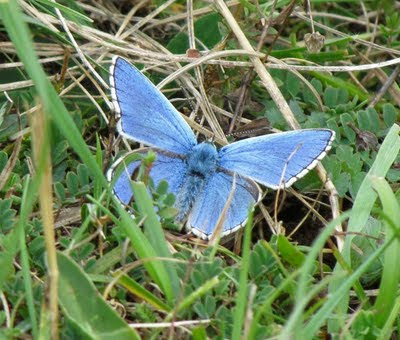 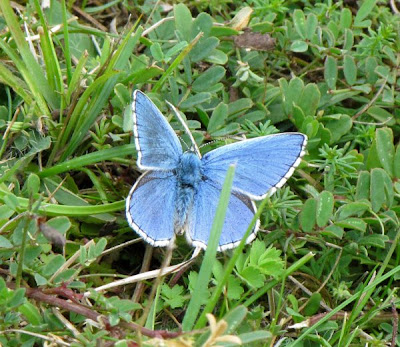 These photos don't really do these stunners justice

On the way back I thought that I would pop in at the Drayton floods, known locally as 1066 as I really needed my wader fix. There were at least 7 green sandpipers though not much else apart from a few straggler ducks. I had a half-hearted go at digiscoping the sandpipers though they were so distant that I didn't make much of an effort. As it turned out one of them was reasonably in focus so I should have tried a bit harder to get a better-composed shot. 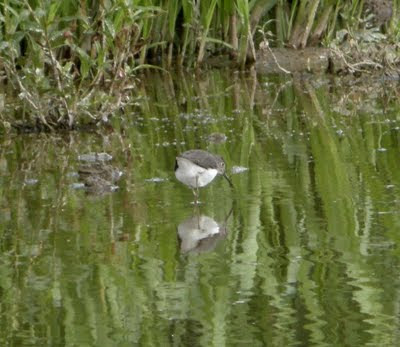 So I've been getting out and about a bit. There are few more sites I want to go to still: Aston Rowant for the Chalkhill Blues and the Silver-spotted Skippers, Otmoor for the Brown Hairstreaks as well as the currently-present whinchats and redstarts as well as my weekly Farmoor visit. With any luck something good will turn up in the county soon by way of compensation for the massive Cornish grip-fest that is now underway in the south west.
Posted by Adam Hartley (Gnome) at 10:48