It's been a great autumn for Nearctic waders so far thanks to a couple of Hurricanes/Tropical Storms coming at just the right time. Down in Cornwall in particular it's been amazing and in fact it's easier to count the American waders that they haven't had yet than those that they have. Of course none of these strays have penetrated inland to Oxfordshire but on Sunday I noticed the WWT at Slimbridge seemed to be having a purple patch with Buff-breasted Sandpiper, Semipalmated Sandpiper and a Dotterel, all on the estuary and it was particularly the semiP that caught my eye. Now my usual "rules of engagement" for twitching required that I wait to make sure that it nicely bedded down and reliable. However, as Slimbridge is quite close and I hadn't been for a couple of years despite being a WWT member I thought that I would take a punt on it the following day.
The key to birding the estuary at Slimbridge is the tides and high tide was at around midday so around 10:15 am I set off west arriving at around 11:30. On arrival I headed straight for the Holden Tower where I soon discovered that the wardens were doing a guided walk down to the estuary to look for some of yesterday's rarities. I hurried out towards the assembled group of a couple of dozen birders though from a distance it didn't look like they were particularly keenly watching anything. When I got to them it turned out that my initial assessment was incorrect and the SemiP was there only about 30 or 40 yards away though hunkered down in a hole in the mud so you could only see the back of its head. The next hour or so was spent watching the back of its head waiting for the brief moments when it would wake up and have a preen before going back to sleep. After a while the bird moved position a bit and some of the other birders drifted away leaving more space and I found a better vantage point so I was able to see the whole bird though it was still asleep. 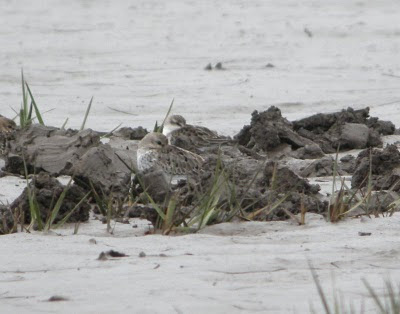 There were lots of views of it hunkered down asleep (Click to Enlarge)
After more patient watching the rest of the Dunlin and Ringed Plover flock started to get more restless now that the tide had turned and the Sandpiper woke up, had a little wander around and then started a good preen. By taking repeated digiscoped photos as it preened I was finally able to get some reasonable shots of the bird caught between preens. Suddenly it stretched its wings, the whole flock flew off out to the estuary to re-start feeding and the show was over. 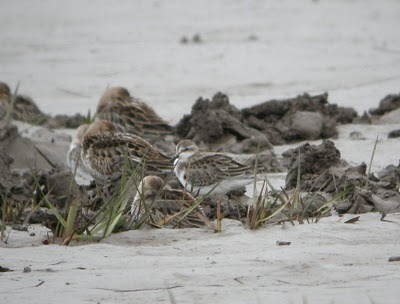 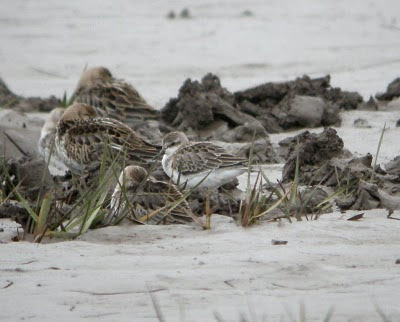 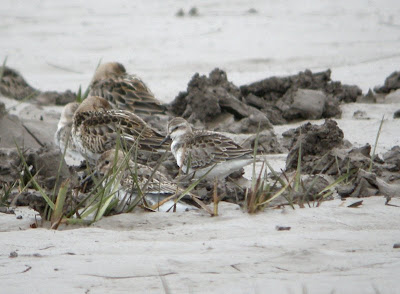 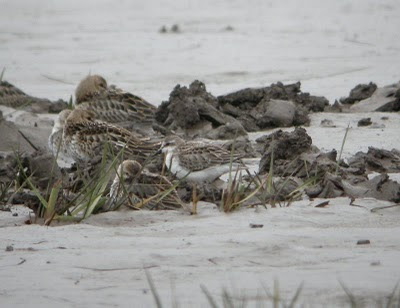 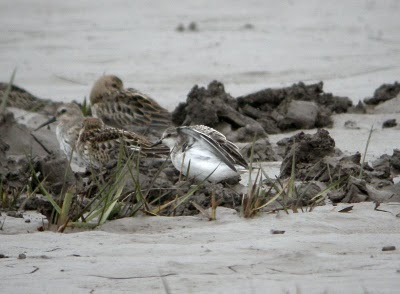 The last photo, stretching its wings about to fly (Click to Enlarge)

Thanks largely to my Cornish efforts I have now managed to see Pec, Baird's, Buff-breasted and SemiP for this year and I'm really hoping to be able to see more of these wonderful American vagrants this autumn. Bring on the storms I say!
Posted by Adam Hartley (Gnome) at 08:56