As I keep asserting, and despite recent evidence to the contrary from this blog, I'm not a great twitcher . However, on the back of what had been a rather tiring period of Christmas festivities and then some tiring Cornwall decorating, followed by some intensive work (yes I do occasionally do some) preparing for a meeting this week between my business partner and our main client, I decided that I needed a bit of a treat as a reward for all my efforts. What could be better than a long and tiring day down in Hampshire, I thought to myself! The avian carrot dangling in front of me was made up of two Mega's: a dark-eyed junco in the New Forest and also a Spanish sparrow nearby at Calshot. This twitch met all my twitching requirements, being within two hour's travel and being well established - the junco for a couple of weeks and the sparrow had apparently even been around long enough to breed a mongrel hybrid so was probably set up there for life! To top it all off I even agreed to pop into Ikea in Southampton to pick up some stuff that we still needed for the Cornwall cottage so I could even score some brownie points on the trip!
I didn't feel that a particularly early start was called for and set off at around 8:20 arriving at around 10 am at the Hawkhill Inclosure in the New Forest. I realised that I'd actually been there before a couple of years ago though that time I'd not actually wandered around at all but had merely stopped by the roadside for a tree pipit sighting. The main arena of action was a large clearing between two coniferous woods. The chief areas of focus in the clearing were two patches of fallen trees on which the bird would occasionally perch and so tactics consisted of waiting by one of them for the bird to show. If it showed at the other patch then there was a mad dash over to view it before it flew off. Whilst we were waiting there were plenty of crossbills zipping about to look at, a few woodlarks were knocking about, one flying off quite low over our heads and a flock of five redpolls were also an interesting diversion. Whilst there I also met a fellow Oxon birder (whose name I unfortunately don't know) and also Lee Evans who was in good spirits having seen the sparrow earlier on. The bird itself proved to be highly mobile and whilst I saw it on three occasions over the two hours that I was there, I struggled to take any decent photos of it. The best showing was when it was down on the deck for several minutes about 10 metres from where we were all standing though it was partially obscured most of the time even then as my photos will testify. It was nice to see this American vagrant on this side of the pond (I'd seen several in American when I was last over there) though the views were frustratingly brief. 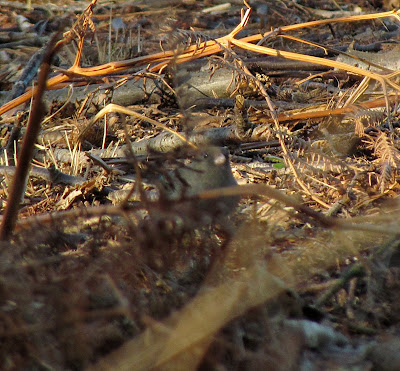 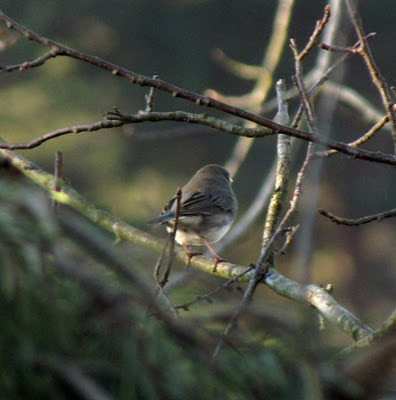 The best I could come up with on the
photographic front for the junco! 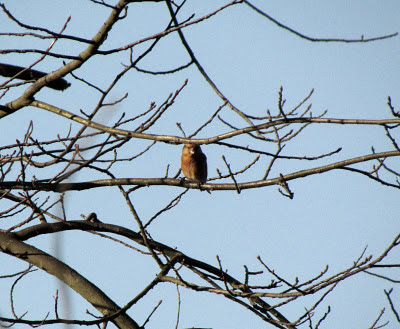 ..and my crossbill photos weren't much better
Next it was on to Calshot for the Spanish sparrow where I arrived at around 1pm. Whilst some birders had parked (safely) quite close to the action, I decided to park down in the village where there was ample parking which was free at this time of year. A few minute walk back up the road found a crowd of about fifty birders mostly lined up overlooking a patch of birdless lawn. It turned out that the target hadn't been seen in over an hour and people were starting to look rather disconsolate. I joined them and wondered whether I should have gone for the sparrow first. The area was rather hard to bird: whilst loud sparrow chirping sound could be heard from behind the houses there was no way they could be seen - it appeared that one had to wait for the sparrows to come out and hang about in the surrounding hedges instead. After a very quiet hour, a few sparrows started appearing and one got the feeling that things were moving a little more. Half an hour later and the call went up that someone had the bird in a dense tangle of vegetation at the far end of the lawn so we all hurried round there. The bird was so deeply buried in the bushes that even with someone describing where it was it took several minutes before I actually picked it out, it's very white cheeks giving it away. Fortunately the bird stayed put for about twenty minutes, preening away so everyone was able at least to see it through various scopes that were set up though the views were never very satisfactory. It was a bit like the Question of Sport "guess the sportsman" (I haven't watched this programme for years so don't know whether they still do this section) where they show tantalising glimpses of someone from which you must piece together who it is: one could see only bits of the bird at a time though never all of it, in all its glory. Whilst there I met fellow Oxon birder Jeremy Dexter for whom Wednesday is his regular day off for birding - he'd been mopping up all the local rarities in Hampshire as well. We chatted briefly and then once I'd got my fill of sparrow glimpses I headed off back to the car. 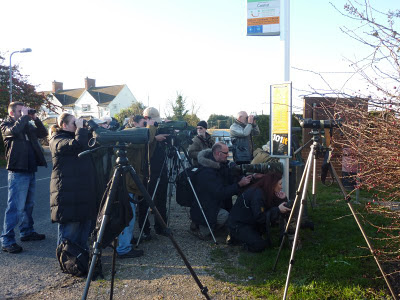 Some nice close-up video of the sparrow, shame it was so obscured.
I had been contemplating nipping in at the ring-billed gull at Gosport whilst I was in the neighbourhood but it was getting rather late so I set the Sat Nav app for Ikea and headed off for a spot of shopping. Fortunately I managed to get everything on my list before headed back up to Oxford, arriving home at around 6:30 pm, tired but pleased with a day out in the sunshine getting brief glimpses of a couple of megas.

Least readers of this blog feel too frustrated at my poor photographic attempts, here's what both birds actually looked like, courtesy of Jason "Badger" Coppock. There's also a rather nice video someone else took giving a feel for the twitch itself here