Just what is going on in Oxon? First the unseasonal grey phalarope at Farmoor, now it's a January Temminck's stint at Rushy Common and a common whitethroat at Cuddesdon. There is clearly some kind of time warp space vortex thingy going on here which is sucking up wintering birds from sunny Africa and dumping them in grey (but remarkably mild) Oxon.
I seem to go through fits and starts when it comes to twitching county birds that I don't need for my county list. Last year I was remarkably lazy about going for anything but this year I've already gone for a phalarope and a stint just in one week. Mind you, given that they are both in January that would make them Mega rares, if only that sort of thing counted on ones various lists. Now there's a thought: life-listing species by month - it could add a whole new dimension to listing.
Anyway, I manage to persuade my five year old son that he'd be happy sitting in the car playing with his Nintendo DS whilst I made a minor "detour" to Rushy Common for the Temminck's en route from Jericho to Summertown to do the weekly shop. Fortunately the handful of birders peering through the hedge just north of the Rushy Common car park gave me a clue as to where to look and it was all remarkably quick and easy. Mind you, I'm used to seeing Temminck's on Port Meadow where they show down to perhaps 10 or 20 yards, not the 100 yards distance of this bird - not the best of views. 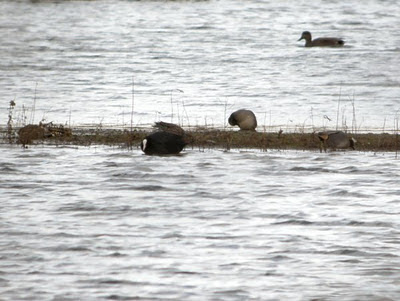 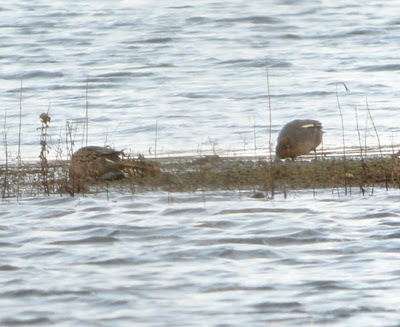 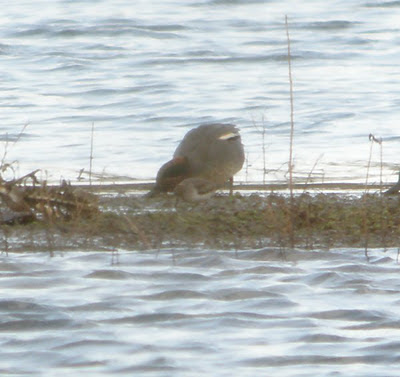 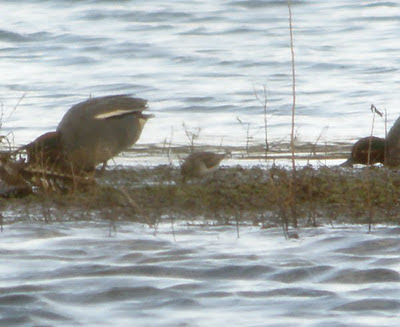 It was quite a feat getting even this grotty digiscoped record shot, taken through a hedge, into what little light there was with the highly reflective water either side of it to mess up the metering. I cranked up the exposure three notches in the end to compensate.

Now if there is a space-time wormhole vortex between us and African (and let's face it, it's the only logical explanation) then let's hope that it brings us something really good that is indigenous to African rather than stuff that we might normally expect anyway just not at this time of year. Now wouldn't that be something!
Posted by Adam Hartley (Gnome) at 14:43